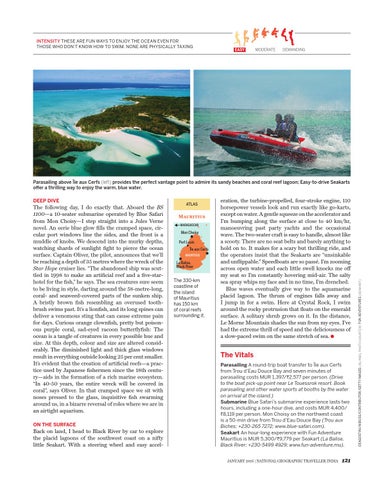 Intensity These are fun ways to enjoy the ocean even for those who don’t know how to swim. None are physically taxing

The following day, I do exactly that. Aboard the BS 1100—a 10-seater submarine operated by Blue Safari from Mon Choisy—I step straight into a Jules Verne novel. An eerie blue glow fills the cramped space, circular port windows line the sides, and the front is a muddle of knobs. We descend into the murky depths, watching shards of sunlight fight to pierce the ocean surface. Captain Oliver, the pilot, announces that we’ll be reaching a depth of 35 metres where the wreck of the Star Hope cruiser lies. “The abandoned ship was scuttled in 1998 to make an artificial reef and a five-starhotel for the fish,” he says. The sea creatures sure seem to be living in style, darting around the 58-metre-long, coral- and seaweed-covered parts of the sunken ship. A bristly brown fish resembling an overused toothbrush swims past. It’s a lionfish, and its long spines can deliver a venomous sting that can cause extreme pain for days. Curious orange clownfish, pretty but poisonous purple coral, sad-eyed racoon butterflyfish: The ocean is a tangle of creatures in every possible hue and size. At this depth, colour and size are altered considerably. The diminished light and thick glass windows result in everything outside looking 25 per cent smaller. It’s evident that the creation of artificial reefs—a practice used by Japanese fishermen since the 18th century—aids in the formation of a rich marine ecosystem. “In 40-50 years, the entire wreck will be covered in coral”, says Oliver. In that cramped space we sit with noses pressed to the glass, inquisitive fish swarming around us, in a bizarre reversal of roles where we are in an airtight aquarium. On the Surface

Back on land, I head to Black River by car to explore the placid lagoons of the southwest coast on a nifty little Seakart. With a steering wheel and easy accel-

The 330-km coastline of the island of Mauritius has 150 km of coral reefs surrounding it.

eration, the turbine-propelled, four-stroke engine, 110 horsepower vessels look and run exactly like go-karts, except on water. A gentle squeeze on the accelerator and I’m bumping along the surface at close to 40 km/hr, manoeuvring past party yachts and the occasional wave. The two-seater craft is easy to handle, almost like a scooty. There are no seat belts and barely anything to hold on to. It makes for a scary but thrilling ride, and the operators insist that the Seakarts are “unsinkable and unflippable.” Speedboats are so passé. I’m zooming across open water and each little swell knocks me off my seat so I’m constantly hovering mid-air. The salty sea spray whips my face and in no time, I’m drenched. Blue waves eventually give way to the aquamarine placid lagoon. The thrum of engines falls away and I jump in for a swim. Here at Crystal Rock, I swim around the rocky protrusion that floats on the emerald surface. A solitary shrub grows on it. In the distance, Le Morne Mountain shades the sun from my eyes. I’ve had the extreme thrill of speed and the deliciousness of a slow-paced swim on the same stretch of sea.

Preview of the January issue of the Indian edition of National Geographic Traveller.