Alchemy of Soil by Natalie Taylor 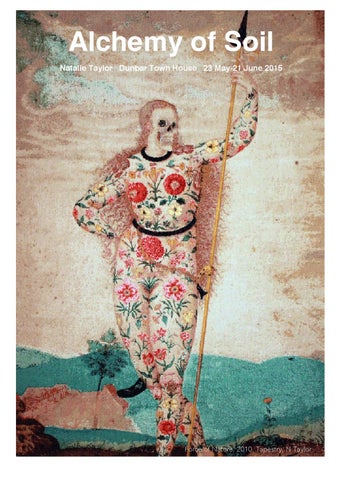 An artist’s response to our precious soils in 2015 the UN International Year of Soils This book forms a digital documentation of ‘Alchem y of Soil’, an outstanding exhibition by the Scottish Natalie Taylor at Dunbar Town House Museum and Gallery, East Lothian from 23 May – 21 June 2015. Taylor was selected as North Light Arts’ first John Muir Artist in Residence at Dunbar Town House, as part of the annual John Muir Birthday Celebrations. During her two week residency she explored the theme of ‘Fertile Ground: Soil&#39;, since this is the UN International Year of Soils, in particular investigating the importance of East Lothian’s soil. Taylor’s work in the ‘Alchemy of Soil Exhibition’ is a range of new and existing work and includes; watercolour paintings, sculpture, drawings, installations and tapestries in dramatically contrasting scales. She has a strong environmental and public art engagement practice and her work is made both in the studio in Edinburgh and on site. Tracy Morgan, North Light Arts Project Manager

Alchemy of Soil, 175cm x 175cm. East Lothian soil pigments This painting was made after research into the soil food web, of which we are part since we rely on the soil for our edible plants, and for animal feed. I took the design of the Kalachakra Mandala as its format and inserted protobacteria, and microfungi at its centre. These make their way up the food chain towards insects, nematodes, mammals and distribution networks towards humans. A third of the mandala is running down the surface as we are endangering 30-40% of global soils to erosion, urbanisation, and pollution.

Tread Lightly for We Tread on our Food, (Previous page, Top and Bottom). This page, Red Shoes and Wheatgrass. Shoes donated by local people form the basis of this living installation, filled with seeds and seedlings of edibles such as courgette, carrot, thyme, wheatgrass, and lettuce. All are easily grown in a confined space with good soil.

Canning Pea, Bronze, 50cm x 15cm x 15cm A cast sculpture made in response to seeing a pink pea seed in the Tasmanian Seed Library. Peas are routinely sprayed with pink fungicide before being germinated to prevent them from rotting first.

New Life, Bronze, 60cm x 15cm x 15cm When a Lupin seed germinates it sends out a tiny five leafed shoot at first. The comparison with a tiny human hand was irresistible.

Suture Seed, 2009, 20cm x 10cm x 10cm, Bronze Suicide Seed, 2009, 20cm x 10cm x 20cm, Bronze These seeds were made after watching Lupin seeds germinating. GM technologies now have the power to render seeds sterile. How will sterile seeds reproduce, and if they rely on humans for reproduction what values do we hold highest? High productivity with chemical input, or good husbandry of soil and species?

Phureja Potato, 2010, 50cm x 40cm Watercolour painting An heirloom variety of Potato; a direct descendant of one of the original potatoes brought over from the Andes. Many of the potatoes we eat each day, in crisps, chips, mash and baked potatoes are derived from genetic pools sourced from these ancient strains.

Golden Rice, 2008, 50cm x 50cm Giclee Print Biotech industries are starting to patent their GM genetic codes for seeds. Is this a move towards copyrighting our basic staple food crops such as rice and wheat?

Soya- Terminator Seed, 2008 Now that the GM technology exists for rendering seeds sterile, Biotech companies are selling their new seeds to subsistence farmers globally in conjunction with the insecticides that the seeds have been developed to resist. Once the farmer agrees to this, he or she is effectively â&amp;#x20AC;&amp;#x2DC;lockedâ&amp;#x20AC;&amp;#x2122; in to the seed deal, and can no longer save and grow his/her own seeds. The seeds are expensive to buy again each year, and many farmers find themselves falling into debt to pay for them. Suicide rates amongst subsistence farmers is increasing alarmingly fast, as researchers into this phenomenon are finding.

Wheat -Order 81, 2008 When US administrator Paul Bremer III took over the governance of Iraq in 2003, he decreed 100 orders which are still in place. Order 81 decreed that “ Farmers shall be prohibited from reusing seeds of protected varieties or any variety mentioned in items 1 and 2 of paragraph (c) of Article 14 of this Chapter. Effectively this means that farmers are now prohibited from growing their own heirloom varieties of seeds, naturally selected over 1000’s of years, in the cradle of agriculture, Mesopotamia, and particular to their region. Farmers are now ‘locked’ into growing biotech industry seeds, in combination with the insecticides, pesticides, and fungicides that are developed to match the seeds’ resistance.

Canning Pea, 2010 After my visit to the Tasmanian Seed Library in 2009, I discovered that pea seeds are dipped in a bright pink fungicide before even the first sparks of life are allowed. To me this symbolised an industrialisation well beyond that level at which I was comfortable, hence the industrial screw growing unnaturally from the sprouting seed.

With many thanks to East Lothian Council, North Light Arts, and Dunbar Town House

Alchemy of Soil by Natalie Taylor

An artist's response to the first John Muir Residency in Dunbar. In the UN International Year of Soils 2015, Taylor looks at local and global soil and food issues through an artist's eye. This book is a synopsis of the resulting exhibition, including existing and new works made in Dunbar. 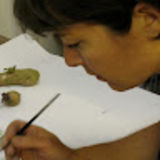