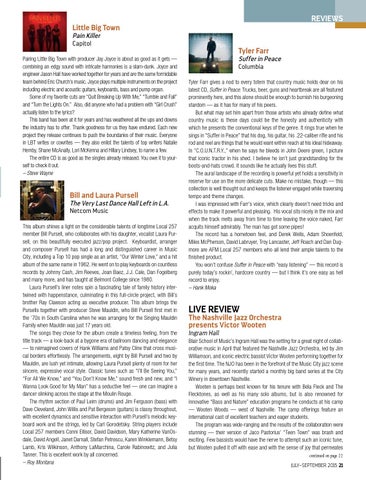 Pairing Little Big Town with producer Jay Joyce is about as good as it gets — combining an edgy sound with intricate harmonies is a slam-dunk. Joyce and engineer Jason Hall have worked together for years and are the same formidable team behind Eric Church’s music. Joyce plays multiple instruments on the project including electric and acoustic guitars, keyboards, bass and pump organ. Some of my favorite cuts are “Quit Breaking Up With Me,” “Tumble and Fall” and “Turn the Lights On.” Also, did anyone who had a problem with “Girl Crush” actually listen to the lyrics? This band has been at it for years and has weathered all the ups and downs the industry has to offer. Thank goodness for us they have endured. Each new project they release continues to push the boundaries of their music. Everyone in LBT writes or cowrites — they also enlist the talents of top writers Natalie Hemby, Shane McAnally, Lori McKenna and Hillary Lindsey, to name a few. The entire CD is as good as the singles already released. You owe it to yourself to check it out. – Steve Wayne

The Very Last Dance Hall Left in L.A. Netcom Music This album shines a light on the considerable talents of longtime Local 257 member Bill Pursell, who collaborates with his daughter, vocalist Laura Pursell, on this beautifully executed jazz/pop project. Keyboardist, arranger and composer Pursell has had a long and distinguished career in Music City, including a Top 10 pop single as an artist, “Our Winter Love,” and a hit album of the same name in 1962. He went on to play keyboards on countless records by Johnny Cash, Jim Reeves, Joan Baez, J.J. Cale, Dan Fogelberg and many more, and has taught at Belmont College since 1980. Laura Pursell’s liner notes spin a fascinating tale of family history intertwined with happenstance, culminating in this full-circle project, with Bill’s brother Ray Clawson acting as executive producer. This album brings the Pursells together with producer Steve Mauldin, who Bill Pursell first met in the ‘70s in South Carolina when he was arranging for the Singing Mauldin Family when Mauldin was just 17 years old. The songs they chose for the album create a timeless feeling, from the title track — a look-back at a bygone era of ballroom dancing and elegance — to reimagined covers of Hank Williams and Patsy Cline that cross musical borders effortlessly. The arrangements, eight by Bill Pursell and two by Mauldin, are lush yet intimate, allowing Laura Pursell plenty of room for her sincere, expressive vocal style. Classic tunes such as “I’ll Be Seeing You,” “For All We Know,” and “You Don’t Know Me,” sound fresh and new, and “I Wanna Look Good for My Man” has a seductive feel — one can imagine a dancer slinking across the stage at the Moulin Rouge. The rhythm section of Paul Leim (drums) and Jim Ferguson (bass) with Dave Cleveland, John Willis and Pat Bergeson (guitars) is classy throughout, with excellent dynamics and sensitive interaction with Pursell’s melodic keyboard work and the strings, led by Carl Gorodetsky. String players include Local 257 members Conni Ellisor, David Davidson, Mary Katherine VanOsdale, David Angell, Janet Darnall, Stefan Petrescu, Karen Winklemann, Betsy Lamb, Kris Wilkinson, Anthony LaMarchina, Carole Rabinowitz, and Julia Tanner. This is excellent work by all concerned. – Roy Montana

Suffer in Peace Columbia Tyler Farr gives a nod to every totem that country music holds dear on his latest CD, Suffer in Peace. Trucks, beer, guns and heartbreak are all featured prominently here, and this alone should be enough to burnish his burgeoning stardom — as it has for many of his peers. But what may set him apart from those artists who already define what country music is these days could be the honesty and authenticity with which he presents the conventional keys of the genre. It rings true when he sings in “Suffer in Peace” that his dog, his guitar, his .22-caliber rifle and his rod and reel are things that he would want within reach at his ideal hideaway. In “C.O.U.N.T.R.Y.,” when he says he bleeds in John Deere green, I picture that iconic tractor in his shed. I believe he isn’t just grandstanding for the boots-and-hats crowd. It sounds like he actually lives this stuff. The aural landscape of the recording is powerful yet holds a sensitivity in reserve for use on the more delicate cuts. Make no mistake, though — this collection is well thought out and keeps the listener engaged while traversing tempo and theme changes. I was impressed with Farr’s voice, which clearly doesn’t need tricks and effects to make it powerful and pleasing. His vocal sits nicely in the mix and when the track melts away from time to time leaving the voice naked, Farr acquits himself admirably. The man has got some pipes! The record has a hometown feel, and Derek Wells, Adam Shoenfeld, Miles McPherson, David Labruyer, Troy Lancaster, Jeff Roach and Dan Dugmore are AFM Local 257 members who all lend their ample talents to the finished product. You won’t confuse Suffer in Peace with “easy listening” — this record is purely today’s rockin’, hardcore country — but I think it’s one easy as hell record to enjoy. – Hank Moka

Blair School of Music’s Ingram Hall was the setting for a great night of collaborative music in April that featured the Nashville Jazz Orchestra, led by Jim Williamson, and iconic electric bassist Victor Wooten performing together for the first time. The NJO has been in the forefront of the Music City jazz scene for many years, and recently started a monthly big band series at the City Winery in downtown Nashville. Wooten is perhaps best known for his tenure with Béla Fleck and The Flecktones, as well as his many solo albums, but is also renowned for innovative “Bass and Nature” education programs he conducts at his camp — Wooten Woods — west of Nashville. The camp offerings feature an international cast of excellent teachers and eager students. The program was wide-ranging and the results of the collaboration were stunning — their version of Jaco Pastorius’ “Teen Town” was brash and exciting. Few bassists would have the nerve to attempt such an iconic tune, but Wooten pulled it off with ease and with the sense of joy that permeates continued on page 22 JULY–SEPTEMBER 2015 21