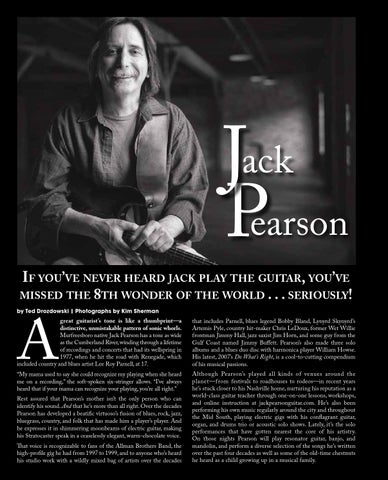 great guitarist’s tone is like a thumbprint—a distinctive, unmistakable pattern of sonic whorls. Murfreesboro native Jack Pearson has a tone as wide as the Cumberland River, winding through a lifetime of recordings and concerts that had its wellspring in 1977, when he hit the road with Renegade, which included country and blues artist Lee Roy Parnell, at 17. “My mama used to say she could recognize my playing when she heard me on a recording,” the soft-spoken six-stringer allows. “I’ve always heard that if your mama can recognize your playing, you’re all right.”

Rest assured that Pearson’s mother isn’t the only person who can identify his sound. And that he’s more than all right. Over the decades Pearson has developed a beatific virtuoso’s fusion of blues, rock, jazz, bluegrass, country, and folk that has made him a player’s player. And he expresses it in shimmering moonbeams of electric guitar, making his Stratocaster speak in a ceaselessly elegant, warm-chocolate voice. That voice is recognizable to fans of the Allman Brothers Band, the high-profile gig he had from 1997 to 1999, and to anyone who’s heard his studio work with a wildly mixed bag of artists over the decades

Although Pearson’s played all kinds of venues around the planet—f rom festivals to roadhouses to rodeos—in recent years he’s stuck closer to his Nashville home, nurturing his reputation as a world-class guitar teacher through one-on-one lessons, workshops, and online instruction at jackpearsonguitar.com. He’s also been performing his own music regularly around the city and throughout the Mid South, playing electric gigs with his conflagrant guitar, organ, and drums trio or acoustic solo shows. Lately, it’s the solo performances that have gotten nearest the core of his artistry. On those nights Pearson will play resonator guitar, banjo, and mandolin, and perform a diverse selection of the songs he’s written over the past four decades as well as some of the old-time chestnuts he heard as a child growing up in a musical family.