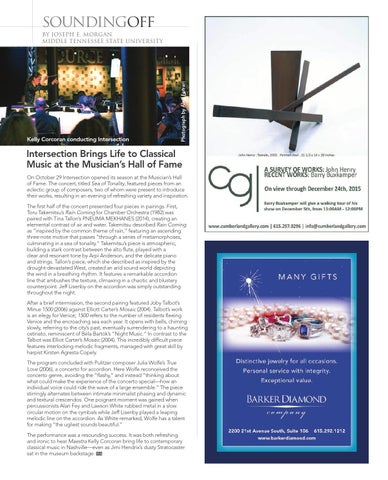 Intersection Brings Life to Classical Music at the Musician’s Hall of Fame On October 29 Intersection opened its season at the Musician’s Hall of Fame. The concert, titled Sea of Tonality, featured pieces from an eclectic group of composers, two of whom were present to introduce their works, resulting in an evening of refreshing variety and inspiration. The first half of the concert presented four pieces in pairings. First, Toru Takemitsu’s Rain Coming for Chamber Orchestra (1982) was paired with Tina Tallon’s PNEUMA MEKHANES (2014), creating an elemental contrast of air and water. Takemitsu described Rain Coming as “inspired by the common theme of rain,” featuring an ascending three-note motive that passes “through a series of metamorphoses, culminating in a sea of tonality.” Takemitsu’s piece is atmospheric, building a stark contrast between the alto flute, played with a clear and resonant tone by Arpi Anderson, and the delicate piano and strings. Tallon’s piece, which she described as inspired by the drought-devastated West, created an arid sound world depicting the wind in a breathing rhythm. It features a remarkable accordion line that ambushes the texture, climaxing in a chaotic and blustery counterpoint. Jeff Lisenby on the accordion was simply outstanding throughout the night. After a brief intermission, the second pairing featured Joby Talbot’s Minus 1500 (2006) against Elliott Carter’s Mosaic (2004). Talbot’s work is an elegy for Venice; 1500 refers to the number of residents fleeing Venice and the encroaching sea each year. It opens with bells, chiming slowly, referring to the city’s past, eventually surrendering to a haunting ostinato, reminiscent of Béla Bartók’s “Night Music.” In contrast to the Talbot was Elliot Carter’s Mosaic (2004). This incredibly difficult piece features interlocking melodic fragments, managed with great skill by harpist Kirsten Agresta Copely. The program concluded with Pulitzer composer Julia Wolfe’s True Love (2006), a concerto for accordion. Here Wolfe reconceived the concerto genre, avoiding the “flashy,” and instead “thinking about what could make the experience of the concerto special—how an individual voice could ride the wave of a large ensemble.” The piece stirringly alternates between intimate minimalist phasing and dynamic and textural crescendos. One poignant moment was gained when percussionists Alan Fey and Lawson White rubbed metal in a slow circular motion on the cymbals while Jeff Lisenby played a leaping melodic line on the accordion. As White remarked, Wolfe has a talent for making “the ugliest sounds beautiful.” The performance was a resounding success. It was both refreshing and ironic to hear Maestra Kelly Corcoran bring life to contemporary classical music in Nashville—even as Jimi Hendrix’s dusty Stratocaster sat in the museum backstage. na