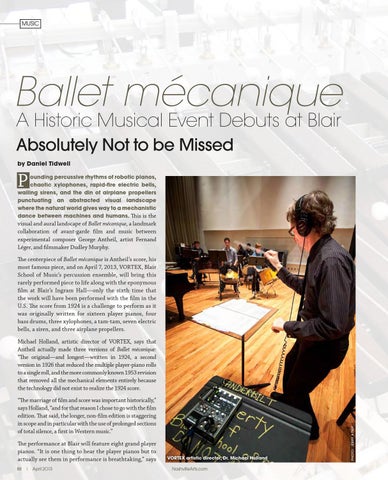 ounding percussive rhythms of robotic pianos, chaotic xylophones, rapid-fire electric bells, wailing sirens, and the din of airplane propellers punctuating an abstracted visual landscape where the natural world gives way to a mechanistic dance between machines and humans. This is the

visual and aural landscape of Ballet mécanique, a landmark collaboration of avant-garde film and music between experimental composer George Antheil, artist Fernand Léger, and filmmaker Dudley Murphy. The centerpiece of Ballet mécanique is Antheil’s score, his most famous piece, and on April 7, 2013, VORTEX, Blair School of Music’s percussion ensemble, will bring this rarely performed piece to life along with the eponymous film at Blair’s Ingram Hall—only the sixth time that the work will have been performed with the film in the U.S. The score from 1924 is a challenge to perform as it was originally written for sixteen player pianos, four bass drums, three xylophones, a tam-tam, seven electric bells, a siren, and three airplane propellers.

“The marriage of film and score was important historically,” says Holland, “and for that reason I chose to go with the film edition. That said, the longer, non-film edition is staggering in scope and in particular with the use of prolonged sections of total silence, a first in Western music.” The performance at Blair will feature eight grand player pianos. “It is one thing to hear the player pianos but to actually see them in performance is breathtaking,” says

Michael Holland, artistic director of VORTEX, says that Antheil actually made three versions of Ballet mécanique: “The original—and longest—written in 1924, a second version in 1926 that reduced the multiple player-piano rolls to a single roll, and the more commonly known 1953 revision that removed all the mechanical elements entirely because the technology did not exist to realize the 1924 score.