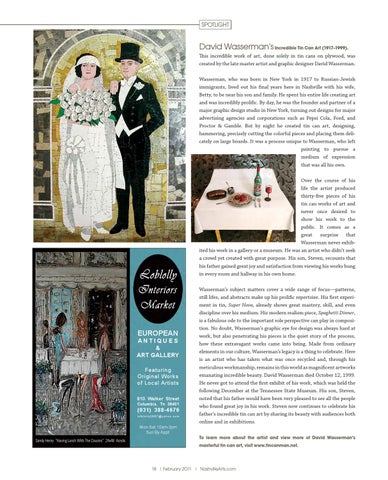 David Wasserman’s Incredible Tin Can Art (1917–1999). This incredible work of art, done solely in tin cans on plywood, was created by the late master artist and graphic designer David Wasserman. Wasserman, who was born in New York in 1917 to Russian-Jewish immigrants, lived out his final years here in Nashville with his wife, Betty, to be near his son and family. He spent his entire life creating art and was incredibly prolific. By day, he was the founder and partner of a major graphic design studio in New York, turning out designs for major advertising agencies and corporations such as Pepsi Cola, Ford, and Proctor &amp; Gamble. But by night he created tin can art, designing, hammering, precisely cutting the colorful pieces and placing them delicately on large boards. It was a process unique to Wasserman, who left painting to pursue a medium of expression that was all his own. Over the course of his life the artist produced thirty-five pieces of his tin can works of art and never once desired to show his work to the public. It comes as a great surprise that Wasserman never exhibited his work in a gallery or a museum. He was an artist who didn’t seek a crowd yet created with great purpose. His son, Steven, recounts that his father gained great joy and satisfaction from viewing his works hung in every room and hallway in his own home.

Wasserman’s subject matters cover a wide range of focus—patterns, still lifes, and abstracts make up his prolific repertoire. His first experiment in tin, Super Nova, already shows great mastery, skill, and even discipline over his medium. His modern realism piece, Spaghetti Dinner, is a fabulous ode to the important role perspective can play in composition. No doubt, Wasserman’s graphic eye for design was always hard at work, but also penetrating his pieces is the quiet story of the process, how these extravagant works came into being. Made from ordinary elements in our culture, Wasserman’s legacy is a thing to celebrate. Here is an artist who has taken what was once recycled and, through his meticulous workmanship, remains in this world as magnificent artworks emanating incredible beauty. David Wasserman died October 12, 1999. He never got to attend the first exhibit of his work, which was held the following December at the Tennessee State Museum. His son, Steven, noted that his father would have been very pleased to see all the people who found great joy in his work. Steven now continues to celebrate his father’s incredible tin can art by sharing its beauty with audiences both online and in exhibitions. To learn more about the artist and view more of David Wasserman’s masterful tin can art, visit www.tincanman.net. 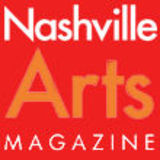