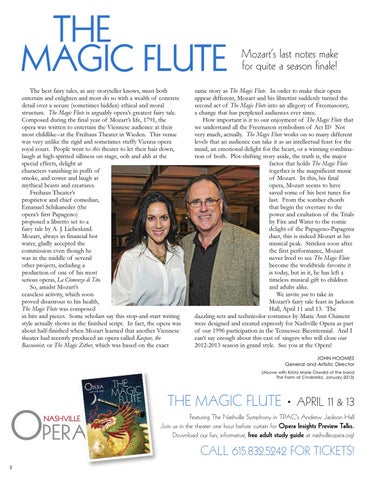 THE MAGIC FLUTE The best fairy tales, as any storyteller knows, must both entertain and enlighten and most do so with a wealth of concrete detail over a secure (sometimes hidden) ethical and moral structure. The Magic Flute is arguably opera’s greatest fairy tale. Composed during the final year of Mozart’s life, 1791, the opera was written to entertain the Viennese audience at their most childlike-at the Freihaus Theater in Wieden. This venue was very unlike the rigid and sometimes stuffy Vienna opera royal court. People went to this theater to let their hair down, laugh at high-spirited silliness on stage, ooh and ahh at the special effects, delight at characters vanishing in puffs of smoke, and cower and laugh at mythical beasts and creatures. Freihaus Theater’s proprietor and chief comedian, Emanuel Schikaneder (the opera’s first Papageno) proposed a libretto set to a fairy tale by A. J. Liebeskind. Mozart, always in financial hot water, gladly accepted the commission even though he was in the middle of several other projects, including a production of one of his most serious operas, La Clemenza di Tito. So, amidst Mozart’s ceaseless activity, which soon proved disastrous to his health, The Magic Flute was composed in bits and pieces. Some scholars say this stop-and-start writing style actually shows in the finished script. In fact, the opera was about half-finished when Mozart learned that another Viennese theater had recently produced an opera called Kaspar, the Bassoonist, or The Magic Zither, which was based on the exact

Mozart’s last notes make for quite a season finale!

same story as The Magic Flute. In order to make their opera appear different, Mozart and his librettist suddenly turned the second act of The Magic Flute into an allegory of Freemasonry, a change that has perplexed audiences ever since. How important is it to our enjoyment of The Magic Flute that we understand all the Freemason symbolism of Act II? Not very much, actually. The Magic Flute works on so many different levels that an audience can take it as an intellectual feast for the mind, an emotional delight for the heart, or a winning combination of both. Plot-shifting story aside, the truth is, the major factor that holds The Magic Flute together is the magnificent music of Mozart. In this, his final opera, Mozart seems to have saved some of his best tunes for last. From the somber chords that begin the overture to the power and exultation of the Trials by Fire and Water to the comic delight of the Papageno-Papagena duet, this is indeed Mozart at his musical peak. Stricken soon after the first performance, Mozart never lived to see The Magic Flute become the worldwide favorite it is today, but in it, he has left a timeless musical gift to children and adults alike. We invite you to take in Mozart’s fairy tale feast in Jackson Hall, April 11 and 13. The dazzling sets and technicolor costumes by Marie Ann Chiment were designed and created expressly for Nashville Opera as part of our 1996 participation in the Tennessee Bicentennial. And I can’t say enough about this cast of singers who will close our 2012-2013 season in grand style. See you at the Opera!

(Above with Krista Marie Oswald of the band The Farm at Cinderella, January 2013)

Featuring The Nashville Symphony in TPAC’s Andrew Jackson Hall Join us in the theater one hour before curtain for Opera Insights Preview Talks. Download our fun, informative, free adult study guide at nashvilleopera.org! 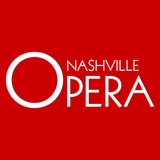