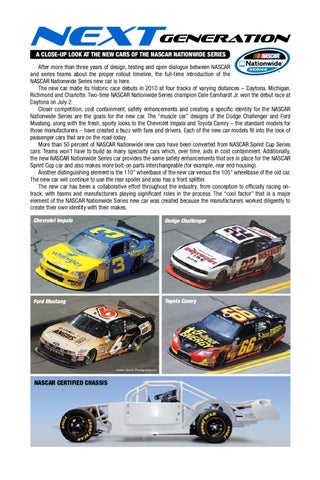 After more than three years of design, testing and open dialogue between NASCAR and series teams about the proper rollout timeline, the full-time introduction of the NASCAR Nationwide Series new car is here. The new car made its historic race debuts in 2010 at four tracks of varying distances – Daytona, Michigan, Richmond and Charlotte. Two-time NASCAR Nationwide Series champion Dale Earnhardt Jr. won the debut race at Daytona on July 2. Closer competition, cost containment, safety enhancements and creating a specific identity for the NASCAR Nationwide Series are the goals for the new car. The “muscle car” designs of the Dodge Challenger and Ford Mustang, along with the fresh, sporty looks to the Chevrolet Impala and Toyota Camry – the standard models for those manufacturers – have created a buzz with fans and drivers. Each of the new car models fit into the look of passenger cars that are on the road today. More than 50 percent of NASCAR Nationwide new cars have been converted from NASCAR Sprint Cup Series cars. Teams won’t have to build as many specialty cars which, over time, aids in cost containment. Additionally, the new NASCAR Nationwide Series car provides the same safety enhancements that are in place for the NASCAR Sprint Cup car and also makes more bolt-on parts interchangeable (for example, rear end housing). Another distinguishing element is the 110” wheelbase of the new car versus the 105” wheelbase of the old car. The new car will continue to use the rear spoiler and also has a front splitter. The new car has been a collaborative effort throughout the industry, from conception to officially racing ontrack, with teams and manufacturers playing significant roles in the process. The “cool factor” that is a major element of the NASCAR Nationwide Series new car was created because the manufacturers worked diligently to create their own identity with their makes. Chevrolet Impala

Splitter Nonadjustable, the splitter helps control the balance of the car along with the amount of front travel in the suspension.

Nose The front of the car is wider than the old NNS car. The headlight area is more vertical, increasing the aerodynamic drag on the car while giving the manufactures more area for detail. The front bumper lines up with the rear bumper improving the “anti-submarine effect” on front to rear impacts.

Wheelbase The new chassis increases the wheelbase from 105 inches to 110 inches. This accommodates the larger center section of the chassis.

Rear Deck Lid Mounted higher than the old car in a location to help the car with front to back balance and stability.

Double Frame Rails This safety feature is the strong foundation for the entire roll cage. It aligns with the front and rear bumper, improving side protection.

Steel Plating and Energy Absorbing Foam Protects the driver from side impact and intrusion into the driver’s compartment.

Roof The larger roof of the car allows for the installation of larger aerodynamic stabilizers (roof flaps) to control the car in the event of a spin.

Cockpit Wider: The driver is moved closer to the center of the vehicle, allowing a larger safety distance from the outer skin of the car. Taller: The driver has more head room, larger side windows for egress and a taller front window for vision.