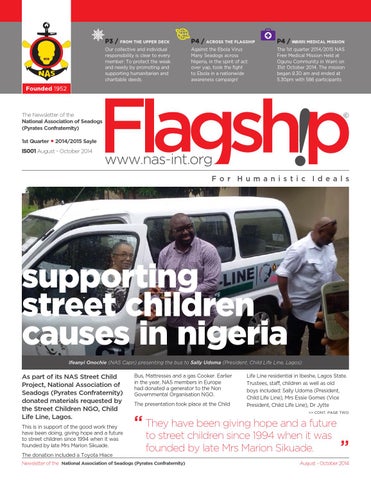 FROM THE UPPER DECK

Our collective and individual responsibility is clear to every member: To protect the weak and needy by promoting and supporting humanitarian and charitable deeds.

Against the Ebola Virus Many Seadogs across Nigeria, in the spirit of act over yap, took the fight to Ebola in a nationwide awareness campaign!

As part of its NAS Street Child Project, National Association of Seadogs (Pyrates Confraternity) donated materials requested by the Street Children NGO, Child Life Line, Lagos. This is in support of the good work they have been doing, giving hope and a future to street children since 1994 when it was founded by late Mrs Marion Sikuade. The donation included a Toyota Hiace

Bus, Mattresses and a gas Cooker. Earlier in the year, NAS members in Europe had donated a generator to the Non Governmental Organisation NGO. The presentation took place at the Child

“ They have been giving hope and a future to street children since 1994 when it was founded by late Mrs Marion Sikuade.

Newsletter of the National Association of Seadogs (Pyrates Confraternity) 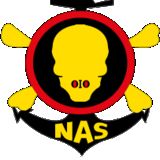