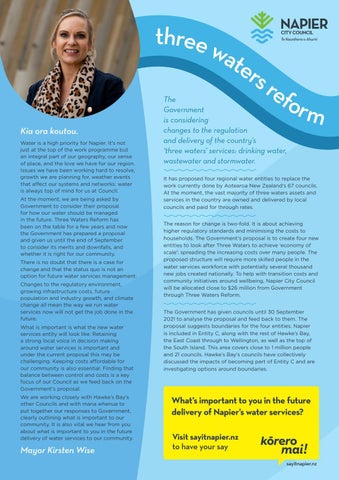 Kia ora koutou. Water is a high priority for Napier. It’s not just at the top of the work programme but an integral part of our geography, our sense of place, and the love we have for our region. Issues we have been working hard to resolve, growth we are planning for, weather events that affect our systems and networks: water is always top of mind for us at Council. At the moment, we are being asked by Government to consider their proposal for how our water should be managed in the future. Three Waters Reform has been on the table for a few years and now the Government has prepared a proposal and given us until the end of September to consider its merits and downfalls, and whether it is right for our community. There is no doubt that there is a case for change and that the status quo is not an option for future water services management. Changes to the regulatory environment, growing infrastructure costs, future population and industry growth, and climate change all mean the way we run water services now will not get the job done in the future. What is important is what the new water services entity will look like. Retaining a strong local voice in decision making around water services is important and under the current proposal this may be challenging. Keeping costs affordable for our community is also essential. Finding that balance between control and costs is a key focus of our Council as we feed back on the Government’s proposal. We are working closely with Hawke’s Bay’s other Councils and with mana whenua to put together our responses to Government, clearly outlining what is important to our community. It is also vital we hear from you about what is important to you in the future delivery of water services to our community.

It has proposed four regional water entities to replace the work currently done by Aotearoa New Zealand’s 67 councils. At the moment, the vast majority of three waters assets and services in the country are owned and delivered by local councils and paid for through rates.

The reason for change is two-fold. It is about achieving higher regulatory standards and minimising the costs to households. The Government’s proposal is to create four new entities to look after Three Waters to achieve ‘economy of scale’: spreading the increasing costs over many people. The proposed structure will require more skilled people in the water services workforce with potentially several thousand new jobs created nationally. To help with transition costs and community initiatives around wellbeing, Napier City Council will be allocated close to $26 million from Government through Three Waters Reform. The Government has given councils until 30 September 2021 to analyse the proposal and feed back to them. The proposal suggests boundaries for the four entities. Napier is included in Entity C, along with the rest of Hawke’s Bay, the East Coast through to Wellington, as well as the top of the South Island. This area covers close to 1 million people and 21 councils. Hawke’s Bay’s councils have collectively discussed the impacts of becoming part of Entity C and are investigating options around boundaries.

What’s important to you in the future delivery of Napier’s water services? Visit sayitnapier.nz to have your say

Q&A What is being proposed? The Government’s Three-Waters Reform proposes transferring ownership and management of drinking water, wastewater and stormwater from 67 independent Councils to four council-owned entities, which would be governed by independent boards. Council representatives would be joined in their governance oversight by mana whenua. This is similar to what our Hawke’s Bay regional study recommended to our five Councils in 2020 last year, but at a much larger scale. The Government’s proposal puts Napier’s three waters services in an entity comprising 21 Councils from the east coast of the North Island, the top of the South Island and including the Chatham Islands.

What are the drawbacks? A possible drawback is in the level of direct, local control and influence we have on the prioritisation, investment, expansion and outcomes delivered by the larger entity. For example we do not know if Napier would be able to pursue a chlorine-free network. To ensure a local voice for Napier we would be relying on mechanisms and processes that are different to those we currently have. This is the area where the most unanswered questions lie. Napier has been involved in both Central and Local Government conversations related to this reform in the preparation of the proposal. However, we do not know how the interests of our community will be protected and empowered in the new structure. We will continue to advocate to Government on the importance of local voice in decision-making around three waters services.

Who would pay? Households and businesses connected to the infrastructure would still be responsible for paying for the water services they receive. We don’t yet know how this charging would be structured.

If I am not connected, would I pay? At this point, there is no indication in the current proposal that those not connected to the networks would be involved or expected to pay.

What about local voice in decision making? The Government has proposed each Entity will have a ‘regional representation’ group of 12 people (six from local councils (there are 21 in Entity C) and six from mana whenua). This group will appoint an ‘independent selection panel’ that will appoint board members for each entity. The ‘board’ is the management structure that will operate the new entity.

The recent Government announcement allocated funding support to individual councils on the basis of a nationally consistent formula that takes into account population, relative deprivation and land area. For Napier, this grant would be $25.8 million. This is known as the “better off” grant. The new water service entities would have access to significantly more borrowing capacity due to their size and structure, with aggregation of costs over the population resulting in lower costs overall.

Can we just work with our neighbouring Hawke’s Bay Councils instead? The five councils of the Hawke’s Bay region have been working together closely for nearly two years on how we could deliver a more affordable and effective three waters service as a region. An independent report released last year showed this was achievable. We will continue to work together as we analyse the reform information and will include this work in our feedback to the Government.

Although there are still many questions around what reform will look like for our community, what is clear is there is a case for change. The status quo will not be sustainable with changes in the regulatory environment, infrastructure, future growth and climate change. Through our feedback on the Government’s proposal, we have the opportunity to clearly state what is important to our community in terms of the balance between retaining a local voice in decision making and ensuring sustainable, affordable, reliable and safe water services in the future.

When and how decisions on the entities, including the exact boundaries, will be made.

What the process and content of formal community consultation will be. This will be guided by Government.

The full impact of the reform on Napier, its Council and community.

The full detail of the proposed reforms including financial forecasts.

Details of the accountability mechanisms including consumer panels, iwi representation, zoning and direction of growth, role in emergency management and requirements for delivery of local priorities and local voice.

Next steps: The Government has provided councils with an opportunity to go back to them with clarifications, questions and feedback on key issues of the Three Waters Reform proposal by 30 September 2021. This is an important time to analyse the impacts the reform will have on our community and our Council services. While we’ll be doing this at a local level, we will also continue to work with other Hawke’s Bay councils to do detailed analysis of the reform and how it relates to the previous work we have done together as a region. The Local Government Act and our Significance & Engagement Policy require us to consult with our community on an issue of this significance. We are committed to ensuring you will be given the opportunity to have your say on decisions the Government makes on this Reform programme, and we will actively advocate for community voice to be an essential element in the Government’s decisionmaking process.

What’s important to you in the future delivery of water services to our community? Join us for a Facebook Live Community Meeting! 7pm Tuesday 7 September at facebook.com/NapierCityCouncil

Visit sayitnapier.nz to have your say before 10 September

At Napier City Council we service:

The costs of water services*: Every council has been given a ‘dashboard’, a snapshot of the costs and benefits of reform. The dashboard shows cost savings will be reached over a number of years. One of the key questions we are taking back to Government in our feedback of their proposal is: What will Day 1 costs looks like for our community?

By 2051, estimated per household cost with reform

By 2051, estimated per household cost without reform 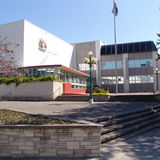