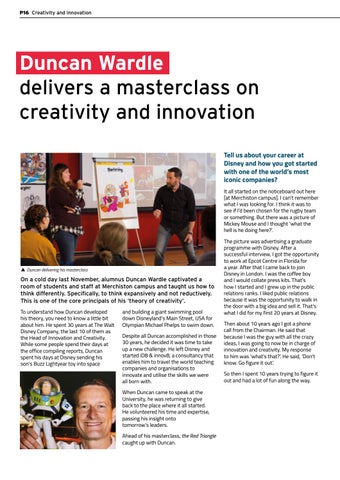 Duncan Wardle delivers a masterclass on creativity and innovation Tell us about your career at Disney and how you got started with one of the world’s most iconic companies? It all started on the noticeboard out here [at Merchiston campus]. I can’t remember what I was looking for. I think it was to see if I’d been chosen for the rugby team or something. But there was a picture of Mickey Mouse and I thought ‘what the hell is he doing here?’.

On a cold day last November, alumnus Duncan Wardle captivated a room of students and staff at Merchiston campus and taught us how to think differently. Specifically, to think expansively and not reductively. This is one of the core principals of his ‘theory of creativity’. To understand how Duncan developed his theory, you need to know a little bit about him. He spent 30 years at The Walt Disney Company, the last 10 of them as the Head of Innovation and Creativity. While some people spend their days at the office compiling reports, Duncan spent his days at Disney sending his son’s Buzz Lightyear toy into space

and building a giant swimming pool down Disneyland’s Main Street, USA for Olympian Michael Phelps to swim down. Despite all Duncan accomplished in those 30 years, he decided it was time to take up a new challenge. He left Disney and started iD8 & innov8, a consultancy that enables him to travel the world teaching companies and organisations to innovate and utilise the skills we were all born with. When Duncan came to speak at the University, he was returning to give back to the place where it all started. He volunteered his time and expertise, passing his insight onto tomorrow’s leaders. Ahead of his masterclass, the Red Triangle caught up with Duncan.

The picture was advertising a graduate programme with Disney. After a successful interview, I got the opportunity to work at Epcot Centre in Florida for a year. After that I came back to join Disney in London. I was the coffee boy and I would collate press kits. That’s how I started and I grew up in the public relations ranks. I liked public relations because it was the opportunity to walk in the door with a big idea and sell it. That’s what I did for my first 20 years at Disney. Then about 10 years ago I got a phone call from the Chairman. He said that because I was the guy with all the crazy ideas, I was going to now be in charge of innovation and creativity. My response to him was ‘what’s that?’. He said, ‘Don’t know. Go figure it out’. So then I spent 10 years trying to figure it out and had a lot of fun along the way.