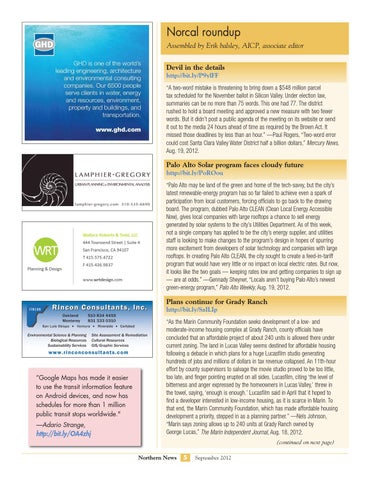 Norcal roundup Assembled by Erik balsley, AICP, associate editor Devil in the details http://bit.ly/P9ylFF “A two-word mistake is threatening to bring down a $548 million parcel tax scheduled for the November ballot in Silicon Valley. Under election law, summaries can be no more than 75 words. This one had 77. The district rushed to hold a board meeting and approved a new measure with two fewer words. But it didn’t post a public agenda of the meeting on its website or send it out to the media 24 hours ahead of time as required by the Brown Act. It missed those deadlines by less than an hour.” —Paul Rogers, “Two-word error could cost Santa Clara Valley Water District half a billion dollars,” Mercury News, Aug. 19, 2012.

Palo Alto Solar program faces cloudy future http://bit.ly/PoROou “Palo Alto may be land of the green and home of the tech-savvy, but the city’s latest renewable-energy program has so far failed to achieve even a spark of participation from local customers, forcing officials to go back to the drawing board. The program, dubbed Palo Alto CLEAN (Clean Local Energy Accessible Now), gives local companies with large rooftops a chance to sell energy generated by solar systems to the city’s Utilities Department. As of this week, not a single company has applied to be the city’s energy supplier, and utilities staff is looking to make changes to the program’s design in hopes of spurring more excitement from developers of solar technology and companies with large rooftops. In creating Palo Alto CLEAN, the city sought to create a feed-in-tariff program that would have very little or no impact on local electric rates. But now, it looks like the two goals — keeping rates low and getting companies to sign up — are at odds.” —Gennady Sheyner, “Locals aren’t buying Palo Alto’s newest green-energy program,” Palo Alto Weekly, Aug. 19, 2012.

“Google Maps has made it easier to use the transit information feature on Android devices, and now has schedules for more than 1 million public transit stops worldwide."

“As the Marin Community Foundation seeks development of a low- and moderate-income housing complex at Grady Ranch, county officials have concluded that an affordable project of about 240 units is allowed there under current zoning. The land in Lucas Valley seems destined for affordable housing following a debacle in which plans for a huge Lucasfilm studio generating hundreds of jobs and millions of dollars in tax revenue collapsed. An 11th-hour effort by county supervisors to salvage the movie studio proved to be too little, too late, and finger pointing erupted on all sides. Lucasfilm, citing ‘the level of bitterness and anger expressed by the homeowners in Lucas Valley,’ threw in the towel, saying, ‘enough is enough.’ Lucasfilm said in April that it hoped to find a developer interested in low-income housing, as it is scarce in Marin. To that end, the Marin Community Foundation, which has made affordable housing development a priority, stepped in as a planning partner.” —Nels Johnson, “Marin says zoning allows up to 240 units at Grady Ranch owned by George Lucas,” The Marin Independent Journal, Aug. 18, 2012. (continued on next page) Northern News 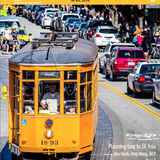