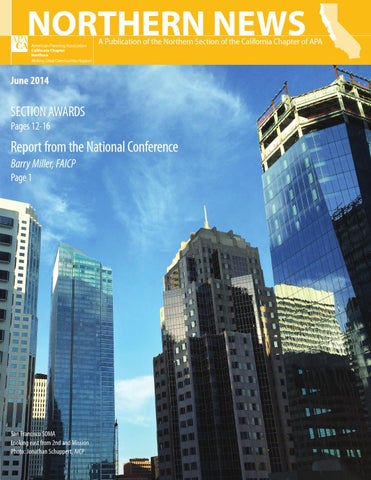 Report from the National Conference By Barry Miller, FAICP

fter three decades of professional practice, I’ve come to regard the annual APA conferences as one of the great perks of being an urban planner. Though I always attend on my own time (and my own dime), the experience of being under one roof with 5,000 urban planners makes it consistently worthwhile. I can’t say that this year’s Atlanta conference — the 13th national conference I’ve attended — was one of my favorites. The venue left a lot to be desired, and I did not choose wisely in planning my four-day itinerary. Still, I couldn’t help feeling uplifted being among so many colleagues, from so many different places, with so many shared experiences and interests. As a host City, Atlanta exceeded my expectations on some levels. It had a larger and more vibrant downtown than I expected. It was more diverse and cosmopolitan than I expected. The legacy of the 1996 Olympics was visible in the infrastructure, parks, and public spaces. Centennial Park, in particular, was a real gem.

South-facing view from the Westin observation level, 74 stories above Atlanta. Photo by author.

I didn’t sign up for an orientation tour. That was my first mistake, because I missed the chance to see Atlanta through a planner’s eyes. This causes me to think that the orientation tour should be a mandatory part of the itinerary and not held concurrently with any speaker sessions. Similarly, I didn’t sign up for any mobile workshops — though I was curious to see the Atlanta BeltLine project and the new developments along the MARTA lines. There was always the lingering fear that I’d miss a really great panel discussion or dynamic speaker — not to mention the extra $60 or so for each workshop. I spent most of my four days in the vastness of the Georgia World Congress Center, a gargantuan 3.9 million square foot building resembling an airport terminal — or three airport terminals, to be more precise. It was 1.3 miles from the conference hotel to the convention center, with signs along the route to remind us of the walk time. Since public health was a major theme of the conference, one really couldn’t complain about the excessive walking. On the other hand, it was ironic to be in sessions on mobile food vendors and food deserts, when there was no place to eat within 15 minutes of the facility. The sessions themselves were a mixed bag. The best sessions I attended featured speakers from right here in Northern California, including a great session on ethics and public health (facilitated by PolicyLink’s Victor Rubin) (continued on page 28)

AICP credits and 10 percent off UC Davis Extension courses Stay up to date on new policies, laws, and practices, while learning from experts in the field. Page 11 2014 Award winners, APA California-Northern Summaries and photos for seven Awards of Merit and seven Awards of Excellence. Page 12

The display of calling cards from firms offering professional services appears in every issue of Northern News. Fees paid by the firms for this service help defray the costs of this newsletter.

Meet a local planner By Siân Llewellyn, AICP Alex Amoroso, AICP, is principal planner for the city of Berkeley, a position he has held for the past seven years. He was elected to the California Planning Roundtable in 2003 and is now an emeritus member.

Tell us a little bit about yourself I live in Oakland, in the lower hills just above Fruitvale, with my wife, three dogs, several fish tanks (I’m a fish geek) and a large yard with orchard. Seeking fun brings me to the ocean almost weekly, to the East Bay hills for hiking, and into The City (SF is still “The City”) to play. The East Bay and the rest of the region also provide entertainment — farmers’ markets all over, Russian River retreat time, there’s so much here. I grew up in San Francisco — North Beach to start; Richmond District from there. I attended San Francisco State University for Urban Studies after Jesuit high School, same as Jerry Brown, but a couple of decades behind him. Most of my first 40 years were in San Francisco: Haight Ashbury and Cole Valley mostly. The most notorious of my addresses was San Quentin Village — outside the gates. How did you become interested in planning as a profession? Growing up in SF infuses urbanism at a young age. My grammar school commute started with a city bus and included a short ride each day on the Powell Street cable car among the tall buildings of downtown. Years of neighborhood walking and garage sales in the family station wagon, a dad who did real estate as a hobby and later a vocation — all contributed to my love of cities. The formal education in cities was more of a delayed realization: I tried to be a business major first but failed miserably. Then I tried a range of classes from broadcasting and theater arts to urban studies 101. I was half way into my urban studies major before I realized it — and it just fit. Tell us about your career in planning I’ve had a long and winding career path. In the beginning, I jumped back and forth across the counter, from public to private and back again. My first stop was an internship in Tiburon, where community planning feels like a game of Monopoly. Other career highlights included staffing the Oakland Hills Firestorm Recovery (continued on next page)

Meet a local planner (continued from previous page) Center, helping the hills rebuild after the devastating fire of 1991; early work on telecom planning, before there were ordinances and federal regulations to control anything; writing Regional Housing 2000 and other initiatives as senior regional planner for the Association of Bay Area Governments (ABAG); and a short stint as Deputy Director–Policy Planning at Alameda County, planning for extremes from agriculture and range lands to the densely populated unincorporated areas. Now I’m at the City of Berkeley, where liberal populism comes full circle to conservative.

What is the most significant planning challenge facing us today? We suffer from a fear of change as a community — not just locally, but nationally and internationally. Our collective head-in-the-sand approach to our fast-changing environment and the slow move to address the changes concern me. This trickles into day-to-day decisions at all levels of planning, and I feel that we end up watering down results to allay fears, rather than addressing the issues head on. Tell us about a favorite project It has to be the ABAG regional housing needs allocation planning I did in 2000. I call this being the regional Darth Vader of Housing. No one was happy with the results — but in the end the Board voted in support of our plan almost unanimously. Communities don’t like feeling that big brother is telling them what to plan for, but we really need to allocate housing for all levels of income to accommodate the economic growth that will keep our region strong. That taught me a big lesson in negotiation, as we had to coordinate with 110 jurisdictions, but also taught me the requirement to plan with the bigger picture in mind and to stand up for the process to get to simple clear results. What do you find most fulfilling about your job? I like taking very complex and difficult-to-understand materials from a wide variety of disciplines and turning them into a manageable project that can be understood by the community. I think this is the essence of our job as planners. The longer I am in this profession, the more I enjoy working with young planners to offer what I can — context, observations over many years of seeing past work come to fruition, or not, and why. They can take it or leave it, but the offer is there. “Our valuable product is the content. Whether it’s print, Internet, or something that hasn’t been invented yet, they’re all just delivery tools.” —Wendy Brandes, board chair of the Columbia Daily Spectator, http://bit.ly/1imQX1D

What are the most important qualities you look for in your staff or partners on projects? It may sound clichéd, but I value honesty and the integrity to lead and take risks. I also want to see the ability to comprehend the big picture, even while in the trenches of a particular report or project, as well as personal and professional calm in the face of adversity. (continued on next page)

Meet a local planner (continued from previous page) What is your advice to planners starting out? Enjoy the ride and recognize that you are doing your job, even if in the end everyone is equally displeased with your outcome. Remember to take vacations â&#x20AC;&#x201D; recharge and do things outside of work. Planning can burn you out! Interviewer SiĂ˘n Llewellyn, AICP, has been with AECOM for more than 14 years. She is a vice president in the design + planning practice, and lives in San Francisco. n