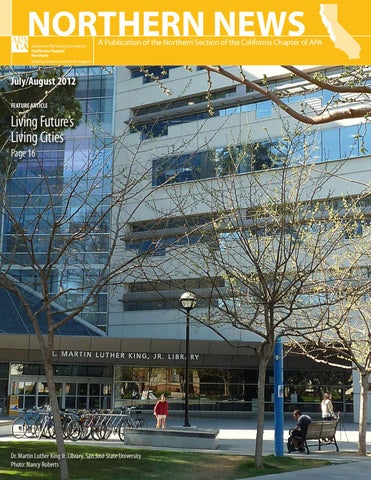 TO READ ONLINE Use control bar at top to select full screen or single-page formats. TO READ OFFLINE OR PRINT Download the PDF for this issue: http://bit.ly/QY0l3g

he planning department of The City and County of San Francisco made a small structural change that brings up to 1.5 million dollars to the department annually. John Rahaim, planning director at the City and County of San Francisco, explained that a part-time dedicated grant writer is key to this financial gain. The department had been applying for grants internally but not as aggressively, explained Rahaim. “It was hard to find the staff time to do it.” They had received grants from Friends of San Francisco City Planning (FOCP) over the years, which had provided staff training and software. However, three years ago, they proposed using the FOCP money for a half-time grant writer for six months. They hired a grant writer who was also trained as a policy analyst. She works three or four days a week. “Friends of City Planning gave us seed money to make this happen,” said Rahaim. The department is now receiving about 1.5 million per year. The grant writer has raised a lot more than that, he said. “Most has been earmarked for streetscape, public realm, and open space design. We have received grants for transit corridors and an urban forest master plan.” For cities looking for grants, there are websites, clearing houses, and regular sources like MTC and CDBG. A good 15 percent of the time spent is in researching prospects.

Rahaim realized that in order to optimize grant acquisitions, it was essential to have one person devoted to the task. “It is the most important thing,” he said. With 50 city agencies, sometimes they would unknowingly end up competing with other departments for the same grants. Planning staff enjoys not having the full responsibility for finding grants. The dedicated grant writer establishes relationships with the regional and state sources. “She knows who to call. It is an art,” explained Rahaim. “It is hard for planners to understand, and a judgment call whether or not to go after certain sources. It is critical. If you want to be serious, someone must devote a good part of the week.” At this point, Rahaim is confident that they will continue to receive 1 to 1.5 million per year from competitive grants. “Two years ago, these grants helped us from having to lay off staff,” said Rahaim. “There is no guarantee that I am going to get 1.5 million. We are looking (to cover) our own salary every year.” n

New APA California Northern website is a pleasure to visit By Theresa Alster, associate editor Our website has been redesigned with improved functionality and a modern, clean appearance. Rotating home page images, provided by APA members, add a fun, personal feature. The home page also features rotating announcements. Content is easier to find with reorganized menus. A new jobs area allows jobs to be submitted by anyone through the “submit a job” page. In addition, there are Energy Committee and Sustainability Committee areas. Webmaster Ronny Kraft, AICP, coordinated the process by gathering input from Northern Section board members while training them how to update the content as needed. One purpose of the makeover was to switch the site over to WordPress so that all the board members can post and edit their own content. Site visitors benefit from more timely content. Check it out at http://norcalapa.org/ n

Where in the world? Each issue, we publish a photo of urban planning interest and ask you to guess the location. The answer is provided elsewhere in the same edition. PAGE 6

What others are saying The “other” planning news from around the country and around the world, compiled by Naphtali H. Knox, FAICP, editor. PAGE 13

Annual APA California Chapter Conference — October 21 – 24 Registration is now open for the 2012 APA California Chapter conference to be held at idyllic Rancho Las Palmas Resort & Spa at Rancho Mirage. It promises to be a packed four days with over 85 educational sessions and 11 mobile workshops — and, given the central location for golf enthusiasts, an APA golf tournament will be featured. Early registration ends on August 17. Student volunteers are also being recruited to assist with various duties during the conference. For more information, go to http://calapa.org

Welcome new Board members! Three new Board members were appointed to the Board at our July meeting. Please welcome Florentina Craciun to the Membership Director position, Erik Balsley, AICP, to the Communications Director position (he also serves as Newsletter Associate Editor), and Veronica Flores as San Jose State University Student Representative. I look forward to these new additions to the Board, and appreciate Rodrigo Orduña, AICP, former Membership Director, and David Keyon, former SJSU Representative, for their past service on the Board. Prior to affirming the above appointments, the Northern Section By-laws were amended to shift some of the duties of the Membership Director to a recreated Communications Director position. This will allow the Membership Director to focus more attention on developing a membership outreach program and to participate in a parallel effort at the California Chapter level. Additionally, the Northern Section has conscientiously expanded its methods of communication with APA members (e.g. Northern News, website, eNews, LinkedIn, Facebook, etc.). It became more evident that a Communications Director was desirable to coordinate and improve the effectiveness of these multiple forms of communication. The ultimate objective is to improve

our services to APA members, and any ideas and suggestions are most welcome.

Upcoming Northern Section sponsored events In addition to the events listed in the calendar on our website, http://norcalapa.org/calendar/upcoming-events/, the Northern Section is very pleased to sponsor several upcoming events with pending AICP|CM credits: • The Northern Section continues to support a Planners Working Group on Energy and the Built Environment coordinated by Josh Hohn, AICP. A third Panel Presentation/General Session is scheduled for this September (date to be announced). See webpage at http://norcalapa.org/programs/energy/ for more information. • With the recent attention on AB 904 (Skinner), a proposed bill to set a cap on minimum parking requirements for transit-intensive areas, the Northern Section will be organizing a workshop to facilitate a dialogue on this issue. This bill has received heightened attention from the planning profession, with strong opinions expressed on both sides of the issue. Although this bill was recently tabled, it is expected to be reintroduced in a modified form in the next legislative session. The date of the workshop is pending, so look for an upcoming announcement. Financial sponsorships are being provided to two upcoming efforts by the San Jose State University Graduate Planning Program: • Urban Planning Coalition (UPC) symposium with multiple panel discussions scheduled on September 29. • Graduate student study with CommUniversity on a comprehensive community assessment of the Spartan-Keyes neighborhood in central San Jose. The outcome will be a community-based report and presentation in early Spring 2013. n

The display of calling cards from firms offering professional services appears in every issue of Northern News. Fees paid by the firms for this service help defray the costs of this newsletter.

Northern Section welcomes 25 new AICP members Seventy-five California planners, representing 15 percent of those taking the test nationally, sat for the May 2012 AICP exam. Of those, 49 — including the 25 Northern Section planners listed below — passed. That represents a 65 percent pass rate for California — slightly higher than the national pass rate of 64 percent. Passing the AICP exam is a tremendous accomplishment and a mark of professional distinction. Passing also allows application for AICP membership and its commitment to a professional code of ethics and continuing education. Please join the Northern Section Board of Directors in congratulating our newest AICP members:

“Even the highest quality BRT systems run in lanes that could just as easily serve regular drivers. All it takes is one government decision to allow private cars on a BRT busway, and then blam: What you have isn’t really BRT anymore.” Dan Malouff, “BRT might be cheap to build, but it’s cheaper to destroy,”

ealth Impact Assessment (HIA) is an emerging practice that aims to bring a greater understanding of human health consequences to public policy and decision-making. It is a system of tools used in combination to evaluate the potential impacts of a policy, plan, program, or project on the health of a population and the distribution of those impacts within the population. “Health” in this context is defined broadly to include consideration of economic, social, and environmental determinants. Moreover, HIAs identify appropriate actions to mitigate those effects and include application to a wide range of policy sectors, involvement of stakeholders, and concerns for social justice. On June 7, URS Corporation hosted a presentation on this topic at their Oakland office. About 30 planners, students, and analysts from both public and private industry attended the event to network and learn how HIAs can be integrated into existing planning processes, the origins of the practice, and how it is evolving to meet planning needs today and in the future. The panelists included: • Usha Vedagiri and Sarah La Belle of URS. They introduced the key features of HIA practice, a planning context, and examples of how HIAs are implemented.

“If you want a glimpse of some of the worst of global warming, scientists suggest taking a look at U.S. weather in recent weeks. Such patterns haven’t happened only in the past week or two. The spring and winter in the U.S. were the warmest on record and among the least snowy, setting the stage for the weather extremes to come.”

• Dr. Rajiv Bhatia, special guest and internationally renowned pioneer and innovator of HIA practice. Bhatia provided background on the origins of HIA as a unique discipline, and discussed the state of the practice today and how it is evolving to meet the needs of tomorrow. The presentation was followed by a robust question and answer period. The event was funded by APA California Northern and URS Corporation and was eligible for 1.0 AICP |CM credits. Panelist bios: Dr. Rajiv Bhatia, MD and Master of Public Health, is the director of occupational and environmental health for the San Francisco Department of Public Health, where he has been responsible for developing and implementing environmental health law and policy since 1998. Dr. Bhatia has had a leading role in cultivating the practice of health impact assessment (continued on next page)

Health Impact Assessment: An innovative approach for planning Healthy Communities (continued from previous page) (HIA) in the United States and has integrated community health monitoring and forecasting tools into the routine work of transportation and planning agencies. Usha Vedagiri, PhD, is a principal health risk and health impact assessor at URS Corp. with 20 years of experience in supporting Environmental, Social, and Health Impact Assessment (ESHIAs), permitting, and remediation for public and private industry clients. Sarah La Belle, AICP, is a senior environmental planner with 20 years of project and program management experience in transportation and transit, land use, and environmental planning and permitting. n

Where in the world?