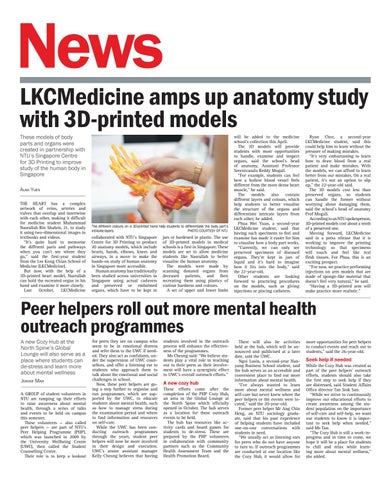 LKCMedicine amps up anatomy study with 3D-printed models These models of body parts and organs were created in partnership with NTU’s Singapore Centre for 3D Printing to improve study of the human body in Singapore Alan Yuen THE HEART has a complex network of veins, arteries and valves that overlap and intertwine with each other, making it difficult for medicine student Muhammad Nasrullah Bin Shahrir, 21, to study it using two-dimensional images in textbooks and videos. “It’s quite hard to memorise the different parts and pathways when you can’t see where they go,” said the first-year student from the Lee Kong Chian School of Medicine (LKCMedicine). But now, with the help of a 3D-printed heart model, Nasrullah can hold the recreated organ in his hand and examine it more closely. Last October, LKCMedicine

The different colours on a 3D-printed hand help students to differentiate the body part’s intricate layers. PHOTO COURTESY OF NTU

collaborated with NTU’s Singapore Centre for 3D Printing to produce 20 anatomy models, which include hearts, hands, elbows, knees and airways, in a move to make the hands-on study of human anatomy in Singapore more accessible. Human anatomy has traditionally been studied across universities in Singapore using actual cadavers and preserved or embalmed organs, which have to be kept in

jars or hardened in plastic. The use of 3D-printed models in medical schools is a first in Singapore. These models are set to allow medicine students like Nasrullah to better visualise the human anatomy. The models were made by scanning donated organs from deceased patients, and then recreating them using plastics of various hardness and colours. A set of upper and lower limbs

will be added to the medicine school’s collection this April. The 3D models will provide students with more opportunities to handle, examine and inspect organs, said the school’s head of anatomy, Assistant Professor Sreenivasulu Reddy Mogali. “For example, students can feel how a hollow blood vessel feels different from the more dense heart muscle,” he said. The models also contain different layers and colours, which help students to better visualise the structure of the organs and differentiate intricate layers from each other, he added. Phua Wei Yuan, a second-year LKCMedicine student, said that having such specimens to feel and examine has made it easier for him to visualise how a body part works. “Currently, we can only see preserved specimens of diseased organs. They’re kept in jars of liquid and it’s hard to imagine how it fits into the body,” said the 22-year-old. Other students are looking forward to practicing procedures on the models, such as giving injections or placing catheters.

Ryan Chor, a second-year LKCMedicine student, said this could help him to learn without the pressure of making mistakes. “It’s very embarrassing to learn how to draw blood from a real patient and make mistakes. With the models, we can afford to learn better from our mistakes. On a real patient, it’s not an option to slip up,” the 22-year-old said. The 3D models cost less than preserved organs, so students can handle the former without worrying about damaging them, said the school’s head of anatomy Prof Mogali. According to an NTU spokesperson, 3D-printed models cost about a tenth of a preserved one. Moving forward, LKCMedicine said in a press release that it is working to improve the printing technology so that specimens will touch and feel like real flesh tissues. For Phua, this is an exciting prospect. “For now, we practice performing injections on arm models that are made of sponge-like material that doesn’t feel very natural,” he said. “Having a 3D-printed arm will make practice more realistic.”

Peer helpers roll out more mental health outreach programmes A new Cozy Hub at the North Spine’s Global Lounge will also serve as a place where students can de-stress and learn more about mental wellness Jeanne Mah A GROUP of student volunteers in NTU are ramping up their efforts to raise awareness about mental health, through a series of talks and events to be held on campus this semester. These volunteers — also called peer helpers — are part of NTU’s Peer Helping Programme (PHP), which was launched in 2009 by the University Wellbeing Centre (UWC), then called the Student Counselling Centre. Their role is to keep a lookout

for peers they see on campus who seem to be in emotional distress and refer them to the UWC if needed. They also act as confidants, under the supervision of UWC counsellors, and offer a listening ear to students who approach them to talk about the emotional and social challenges in school. Now, these peer helpers are going a step further to organise and run programmes, which are supported by the UWC, to educate students about mental health, such as how to manage stress during the examination period and where to find information and resources on self-care. While the UWC has been conducting outreach programmes through the years, student peer helpers will now be more involved in their design and execution. UWC’s senior assistant manager Kelly Cheong believes that having

students involved in the outreach process will enhance the effectiveness of the programmes. Ms Cheong said: “We believe students play a vital role in reaching out to their peers as their involvement will have a synergistic effect to UWC’s overall outreach efforts.”

A new cozy hub These efforts come after the completion of the PHP Cozy Hub, an area in the Global Lounge at the North Spine which officially opened in October. The hub serves as a location for these outreach events to be held. The hub has resources like activity cards and board games for students to de-stress. These are prepared by the PHP volunteers in collaboration with community partners such as the Community Health Assessment Team and the Health Promotion Board.

There will also be activities held at the hub, which will be announced and publicised at a later date, said the UWC. Ngoi Lusin, a second-year Nanyang Business School student, said the hub serves as an accessible and convenient place to find out more information about mental health. “I’ve always wanted to learn more about mental wellness and self-care but never knew where the peer helpers or the events were located,” said the 20-year-old. Former peer helper Mr Ang Chin Heng, an NTU sociology graduate, said that his past experience of helping students have included one-on-one conversations with students in need. “We usually act as listening ears for peers who do not have anyone to turn to. If outreach programmes are conducted at one location like the Cozy Hub, it would allow for

more opportunities for peer helpers to conduct events and reach out to students,” said the 26-year-old.

Seek help if needed While the Cozy Hub was created as part of the peer helpers’ outreach efforts, students should also take the first step to seek help if they are distressed, said Student Affairs Office director Tan Siok San. “While we strive to continuously improve our educational efforts to create awareness among the student population on the importance of self-care and self-help, we want our students to know it is important to seek help when needed,” said Ms Tan. “The Cozy Hub is still a work-inprogress and in time to come, we hope it will be a place for students to chill and relax while learning more about mental wellness,” she added. 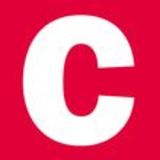