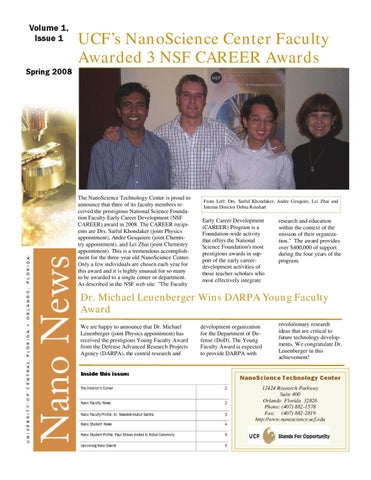 The NanoScience Technology Center is proud to announce that three of its faculty members received the prestigious National Science Foundation Faculty Early Career Development (NSF CAREER) award in 2008. The CAREER recipients are Drs. Saiful Khondaker (joint Physics appointment), Andre Gesquiere (joint Chemistry appointment), and Lei Zhai (joint Chemistry appointment). This is a tremendous accomplishment for the three-year old NanoScience Center. Only a few individuals are chosen each year for this award and it is highly unusual for so many to be awarded to a single center or department. As described in the NSF web site: "The Faculty

research and education within the context of the mission of their organization." The award provides over $400,000 of support during the four years of the program.

development organization for the Department of Defense (DoD). The Young Faculty Award is expected to provide DARPA with

revolutionary research ideas that are critical to future technology developments. We congratulate Dr. Leuenberger in this achievement!

The Director’s Corner Nanoscience combines science and engineering to provide technology that promises to transform healthcare, manufacturing, and the energy industry. Recognizing the significant potential for nano-scale research, governments and industry throughout the world are providing an enormous amount of funding to stimulate technology development. The state of Florida acknowledged this potential five years ago when UCF was granted over $4 million of annual funding to create an interdisciplinary nanoscience center in Central Florida. In 2007, after a $3.5M buildout, the center officially opened its 20,000-square-foot research facility in the Central Florida Research

Park adjoining UCF. On site we now have a total of 15 faculty and nearly 100 graduate and undergraduate students representing Physics, Electrical Engineering, Mechanical Engineering, Biomedical Engineering, and Chemistry programs, who come from all parts of the world. We are rapidly creating tools to treat neurological diseases, materials that can advance solar and fuel cell technology, and longer lasting batteries that can make ever-smaller electrical devices a reality, among others. Despite our young age, the NSTC can already claim a number of successes. Just this year we secured three NSF CAREER Awards and one DARPA Young Faculty Award. One of our PhD students has been selected to attend the upcoming Nobel Laureate ceremony in Germany. These awards are given to only a handful of researchers that show promise of defining the future of this

evolving discipline. All of our researchers have received external funding; each year we produce over 90 publications describing a broad range of exciting research projects; we have multiple patents pending; and a number of our faculty have created small companies to explore the commercial potential of their scientific discoveries. The NanoScience Technology Center was created to tackle the difficult problems we face regionally, within the state of Florida, and nationally by using a team-based, multidisciplinary approach. We to serve as a resource to meet the current and future needs of Floridians and we seek to partner with others in this new endeavor. We hope you will share our sense of pride and adventure as we explore these exciting frontiers of science. Debra R. Reinhart, Ph.D., PE

This paper (J. Am. Chem. Soc. (2008, 130, 2780-2782) detailed the development of a novel immunoassay technology using gold nanoparticle materials and dynamic light scattering. The paper is titled A one-step homogeneous immunoassay for cancer biomarket detection using gold nanoparticle probes coupled with dynamic light scatteringand and involved the work of two graduate students, Xiong (Shawn) Liu, Qiu Dai. This technology (nanoDLSA), offers several distinct advantages over traditional immunoassays and other nano products currently under development. The assay is extremely easy to conduct, uses very small amount of samples and antibody probes, yet has sensitivity much higher than many existing techniques. Dr. Qun Huo’s Paper selected as HotPaper This was selected by the editor and will soon appear in Chemical Communications (titled Surface modification of gold nanorods through a place exchange reaction inside an ionic exchange resin) es-

tablished a very simple way to modify the surface of gold nanorods synthesized from an aqueous solution. Such a modification has been considered as a daunting challenge in this field. Gold nanorods have many unique optical properties such as near IR surface plasmon resonance absorption that is of tremendous interest and value for biological applications. Two undergraduate students (Qiu Dai and Janelle Coutts) made major contributions to this work. Dr. Masunov publishes lead theoretical paper Dr. Masunov is pursuing a wide variety of research projects through his Multiscale Modeling Laboratory. A recent theoretical articles explores the optimal computational design of materials for products such as three dimensional optical data storage devices. For more information see Double excitations and stateto-state transition dipoles in π-π* excited singlet states of linear polyenes: Timedependent density-functional theory versus multiconfigurational methods. Phys. Rev. A, 2008.

Nano Faculty Profile: Dr. Swadeshmukul Santra Dr. Santra has a profound curiosity about potential of nanoscience which is demonstrated through a broad range of research projects. These range from multimodal nanoparticles for bioimaging to increasing the efficiency of photovoltaic solar cells. For instance, one of his recent projects focuses on the creation of different types of semiconductor based engineered materials for photovoltaics or these materials could also be utilized in memory devices, LEDs, lasers, or even sensors. Dr. Santra’s group has also recently developed hybrid one-dimensional nanomaterials such as CdS:Mn/ZnS coreshell nanowires and ZnO “paint-brush” like nanotube-nanowire self-assembly as shown below.

(a) SEM images of the ZnO paint-brush structures produced at 200 oC. Part (b) shows the closer view of the top part of single paint-brush revealing the hollow interior of the nanotube handles. SEM image in the inset of (b) exhibits the mesoporous nature of a nanotube handle towards their brush attached end.(J. Phys. Chem.. C, 2008, in press).

Nano Student News The Arrival of the Romanians During the summer of 2008 the NanoScience Technology Center at the University of Central Florida will host Andreea Eliza Poalelungi and Albert Casandruc from Alexandru Ioan Cuza University in Romania. These two students will be our interns during the months of June and July 2008. During this time they will work with Dr. Andre Gesquiere, Dr. Artem Masunov of NSTC as well as Dr. Nicoleta SorloaciaHickman of the Florida Solar Energy Center (FSEC). They will be working in these laboratories and on various research projects as assigned to them. The overall goal of the internship is to establish and enhance research collaborations between the NSTC and Alexandru Ioan Cuza University in Romania.

Poster Presentation Award” for his work in a project titled: Local-gated singlewalled carbon nanotube field transitors assembled by AC dielectrophoresis. See more information about Paul in the Nano Student Profile in the next page.

Nano Student Profile: Paul Stokes & his Invitation to the Nobel Prize Ceremony Germany ,and wish him great success in the years to come!

Paul Stokes has been selected as one of only 60 participants from the U.S. to attend the upcoming Lindau Nobel Laureate Meeting for Physics in Germany in June. Paul is a graduate student in the Department of Physics and is a Ph.D. student of Dr. Saiful Khondaker (joint faculty appointment NanoScience center & Physics). Dr. Khondaker initiated Paul's nomination to the Nobel Laureate Meeting which was formally nominated by the VP of Research, Dr. M.J. Soileau. As part of this process, Paul will attend the meeting in Germany, he will listen to the Nobel prize winners' lectures, and will take part in various networking experiences during this week long event from June 29th to July 4th. Their work is also represented in an upcoming article in Nanotechnology titled: Local-gated single-walled carbon nanotube field effect transistors assembled by AC dielectrophoresis.

An example of a carbon nanotube device (bottom right) that Paul Stokes (top) and his mentor Dr. Saiful Khoncdaker create at the NanoScience Center which may be used to create quantum transistors as a component in future computer chips.

Paul grew up in New Jersey and surprisingly he was originally an accounting major at West Virginia University. He wasnâ&#x20AC;&#x2122;t enjoying his coursework and then he took a couple of science courses, really enjoyed them, and eventually decided to transfer to Physics. When he graduated with a B.S. in Physics he applied to many large, well known Physics graduate programs, but he is very pleased he came to UCF because of the 1-on-1 guidance he receives from his mentor, Dr. Khondaker. After graduation Paul is considering a position in the developing nanoelectronics industry in either a startup or with an established company such as Intel. We congratulate Paul and we hope he enjoys this rich educational experience!

The National Standards Technology Institute (NSTI) will hold their 11th annual Nanotech 2008 event in Boston this year from June 1-5.

8th International Conference on Nanotechnology will be in Arlington, TX from Aug 18-21

The UCF NSTC will provide a free pizza, describe new discoveries in the world of nano on May 15th from 3 to 5pm (see page 6).

The Micro Nano Breakthrough Conference will be held Sept 8-10 in Vancouver, WA to explore Science to Commercialization for the Micro/Nanotechnology Economy.

AVS 2008 The American Vacuum Society will hold their annual conference on Oct. 19-24 in Boston, MA.

The NSTC Seeks To

• Foster interdisciplinary theoretical, fundamental and translational research in nanoscience • Discover new applications in optics, photonics, data processing and semiconductor technology • Train and educate a new class of investigators whose primary interest is in nanoscience and technology • Establish and nurture industry and research organization partnerships and position the University of Central Florida as an international leader in nanoscience technology

Nano Research Expo Day May 15th, 2008 The NanoScience Center’s Industry Affiliates Program Please consider becoming one of the founding members of UCF’s NanoScience Technology Center Industrial Affiliates Program. This program has been created to meet the needs of your company and to provide our faculty members with an interface with the commercial world. The NanoScience Technology Center has 18 faculty members; in 2008 we received three prestigious NSF CAREER awards and one DARPA Young Faculty Award. We seek to leverage our core state line funding of over $4M annually into exciting research findings and commercializable IP. Founding membership costs are a modest $1k/yr. Feel free to call me at 407 882-1189 or E-mail us at anderj@mail.ucf.edu if I can answer any questions about our research group.

Pizza & Sodas will be served NanoMaterials is the newsletter for the NanoScience Technology Center (NSTC) and the Advanced Materials Processing and Analysis Center (AMPA...

NanoMaterials is the newsletter for the NanoScience Technology Center (NSTC) and the Advanced Materials Processing and Analysis Center (AMPA...