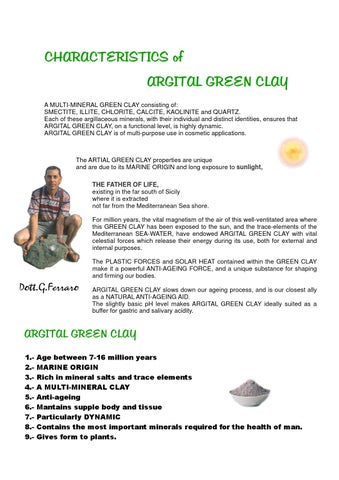 The ARTIAL GREEN CLAY properties are unique and are due to its MARINE ORIGIN and long exposure to sunlight, THE FATHER OF LIFE, existing in the far south of Sicily where it is extracted not far from the Mediterranean Sea shore. For million years, the vital magnetism of the air of this well-ventitated area where this GREEN CLAY has been exposed to the sun, and the trace-elements of the Mediterranean SEA-WATER, have endowed ARGITAL GREEN CLAY with vital celestial forces which release their energy during its use, both for external and internal purposes. The PLASTIC FORCES and SOLAR HEAT contained within the GREEN CLAY make it a powerful ANTI-AGEING FORCE, and a unique substance for shaping and firming our bodies.

ARGITAL GREEN CLAY slows down our ageing process, and is our closest ally as a NATURAL ANTI-AGEING AID. The slightly basic pH level makes ARGITAL GREEN CLAY ideally suited as a buffer for gastric and salivary acidity.

Green CLAY from an historical view point RUDOLF STEINER was the man who, more than any other, understood the curative properties and importance of CLAY for the balance of the natural kingdom and the planet.

In the IV and V Centuries BC, Hippocrates treated various pains with clay. In the First Century AD, the Elder in his Natural History (the Historia Naturale of C. Pliny Secundus) and Dioscorides, the Greek physician, in his treatise on medical matters, recommended clay, given its numerous curative properties. In the Second Century AD, Galen recognized the use of CLAY as a powerful natural remedy for many illnesses. Avicenna (Abu-Ali Sina), Iranian physician and philosopher, describes CLAY in his Canon of Medicine as a powerful multi-purpose remedy.

In 1920, the famous Abbot Kneipp reintroduced CLAY as an important and potent natural medicine, describing it as follows: CLAY cures inflammations, draws towards it any sick and putrid material, heals wounds and ulcers. It is an exellent remedy for headaches , back-aches, inflammations, intoxications etc .

In the twentieth century Julius Strump, a Berlin physician, used clay to treat many illnesses including Asian cholera in 1903. During the 1914-1918 war, the French army used CLAY to prevent dysentery.

GHANDI, a great and brilliant figure of our times, personally used CLAY in cataplasm form and recommended its use.

Green CLAY NATURE S GIFT TO MAN CLAY is one of the many remedies that nature offers man. Sometimes it can be used alone, and at other times it has to be accompanied by a diet, a phytotherapic treatment, or both, or even by something else. This forms part of the so-called elementary or simple substances such as officinal herbs, salt, earth, air, water, sunlight, moonlight or starlight. Hidden within these substances are wisdom, strength, health and beauty. Softness, willingness and availability, openmindedness, and charm are typical characteristics of living systems and also of clay, which can be defined as the heart of the mineral kingdom, a mineral organism that is highly evolved when compared to the individual elements that make it up; namely, silica, calcium, oligoelements and mineral salts.

However, CLAY is something more than the individual elements that constitute it, in the same way that man is something more than the sum total of his organs, senses and limbs. Since the beginning of time and without attracting attention, CLAY, like silica its main component, has silently accompanied the development of civilization, the life of the planet, and the daily life of the individual; this it will continue to do in the future.

In nature, CLAY regulates the growth of plants, it is a precious source of mineral salts and antidotal substances for animals. The GREEN CLAY of marine origin, slows down the ageing process of the human organism, and with its metals and oligoelements it represents, as a living organism, an important part of the earth s immune system.

GENESIS OF CLAY memoir of the world

CLAY is a natural substance, simple in appearance, which is found at every latitude. It is an inorganic substance belonging to the hydrosphere and, in particular, to the earth s soil.

Its exact crystalline structure sets it apart from muds obtained through the chemical and biochemical transformation of vegetal or animal debris by means of atmospheric agents such as heat, rain, wind etc. and also by micro-organisms such as bacteria, ferments, moulds etc.

CLAY is one of the basic components of our planet, the bearer of solar forces and endowed with a special property, it is able to exert a unique influence according to a predetermined law. CLAY contains both iron, a static element, and silica, a dynamic and intelligent element. Silica is the memory, the brain of clay itself. Silica and clay form part of the world of silicates which together make up 91.5% of the earth s crust. These like an enormous cloak, wrap around and protect the planet from atmospheric agents in exactly the same way that the skin wraps around and protects our bodies from the external world.

ARGITAL MARINE GREEN CLAY contains VITAL PLASTIC FORCES, MINERAL SALTS and OLIGOELEMENTS from the sea that gradually renew and enrich the skin. These FORCES are a NATURAL ANTI-AGEING, and are assimilated by our bodies through the external and internal use of GREEN CLAY.

With ARGITAL multi-mineral marine GREEN CLAY it is possible to keep the body as plastic and young as possible in relation to one s age and to maintain a certain health state by virtue of plasticity, a characteristic of this marine GREEN CLAY.

Plasticity is a synonym of equilibrium and health and is at the basis of good health. This because a supple and plastic body is also a young body no matter the age.

CLAY and MAN S LIFE Clay is a precious asset in the mineral kingdom, and dates back to ancient times as one of the first materials to be used by man. It is referred to in the Bible as the subtance with which the LORD GOD fashioned man, Genesis 2:7 And the LORD God formed man of the dust of the ground, and breathed into his nostrils the breath of life, and man became a living soul .

It is highly probable, having seen wounded or sick animals rolling in mud, covering their bodies with it, and then being healed, that man soon discovered the therapeutic properties of clay which have since been scientifically confirmed. Green Clay is a precious living mixture, a natural and effective remedy for a large number of malfunctions, and is also a valid hygienic and cosmetic aid that can be used at different stages in personal hygiene. According to the theory held by A.G Cairns Smith, the Scottish chemist, the spark of life was set off by a series of complex biodynamic reactions in the heart of the clayey mass. We could say that Green Clay treatment is equivalent to an intravenous injection of life forces, providing energy and vigour. Moreover, Green Clay combats the ageing process, a terrestrial process linked to the force of gravity, since it is rich in the light forces of its silica content. Silica is the cell cement in man, which is immediately transformed into calcium. Indeed, two-thirds of bone is made up of silica. Therfore Green Clay is the ideal remedy for bone problems and diseases because it also produces oxygen that acts as a natural antibiotic.

GREEN CLAY and PETS CLAY is also a good and healthy dietary supplement for pets such as dogs , cats , and birds. In the case of dogs and cats whose food nowadays mainly consist of tinned meat, one can add half or a quarter of a tea spoon of CLAY to their food. In this way both digestibility and intestinal functions are improved. For cats, that are very exacting in their tastes, instead of using clay powder is possible to use CLAY gel.