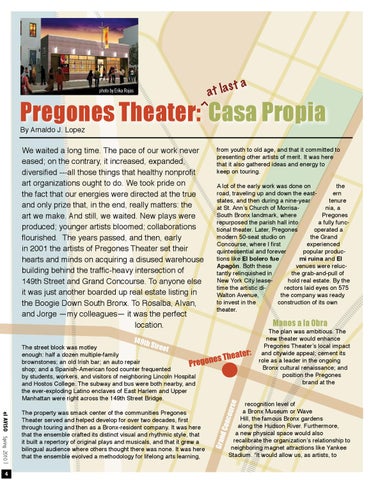 We waited a long time. The pace of our work never eased; on the contrary, it increased, expanded, diversified ---all those things that healthy nonprofit art organizations ought to do. We took pride on the fact that our energies were directed at the true and only prize that, in the end, really matters: the art we make. And still, we waited. New plays were produced; younger artists bloomed; collaborations flourished. The years passed, and then, early in 2001 the artists of Pregones Theater set their hearts and minds on acquiring a disused warehouse building behind the traffic-heavy intersection of 149th Street and Grand Concourse. To anyone else it was just another boarded up real estate listing in the Boogie Down South Bronx. To Rosalba, Alvan, and Jorge —my colleagues— it was the perfect location. The street block was motley enough: half a dozen multiple-family brownstones; an old Irish bar; an auto repair shop; and a Spanish-American food counter frequented by students, workers, and visitors of neighboring Lincoln Hospital and Hostos College. The subway and bus were both nearby, and the ever-exploding Latino enclaves of East Harlem and Upper Manhattan were right across the 149th Street Bridge. el AVISO Spring 2010 | 4

The property was smack center of the communities Pregones Theater served and helped develop for over two decades, first through touring and then as a Bronx-resident company. It was here that the ensemble crafted its distinct visual and rhythmic style, that it built a repertory of original plays and musicals, and that it grew a bilingual audience where others thought there was none. It was here that the ensemble evolved a methodology for lifelong arts learning,

from youth to old age, and that it committed to presenting other artists of merit. It was here that it also gathered ideas and energy to keep on touring. A lot of the early work was done on the road, traveling up and down the eastern states, and then during a nine-year tenure at St. Ann’s Church of Morrisania, a South Bronx landmark, where Pregones repurposed the parish hall into a fully functional theater. Later, Pregones operated a modern 50-seat studio on the Grand Concourse, where I first experienced quintessential and forever popular productions like El bolero fue mi ruina and El Apagón. Both these venues were reluctantly relinquished in the grab-and-pull of New York City leasehold real estate. By the time the artistic directors laid eyes on 575 Walton Avenue, the company was ready to invest in the construction of its own theater.

The plan was ambitious. The new theater would enhance Pregones Theater’s local impact and citywide appeal; cement its role as a leader in the ongoing Bronx cultural renaissance; and position the Pregones brand at the recognition level of a Bronx Museum or Wave Hill, the famous Bronx gardens along the Hudson River. Furthermore, a new physical space would also recalibrate the organization’s relationship to neighboring magnet attractions like Yankee Stadium. “It would allow us, as artists, to

A Publication of the National Association of Latino Arts and Cultures. Learn more at www.nalac.org 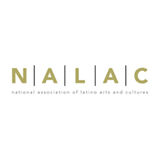