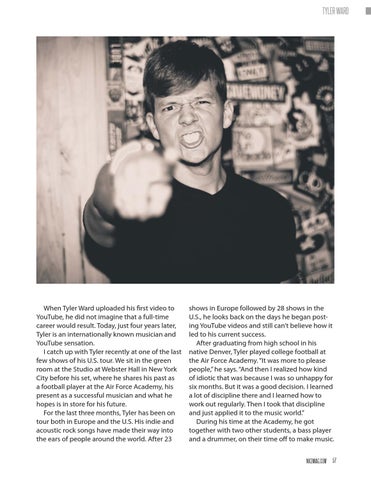 When Tyler Ward uploaded his first video to YouTube, he did not imagine that a full-time career would result. Today, just four years later, Tyler is an internationally known musician and YouTube sensation. I catch up with Tyler recently at one of the last few shows of his U.S. tour. We sit in the green room at the Studio at Webster Hall in New York City before his set, where he shares his past as a football player at the Air Force Academy, his present as a successful musician and what he hopes is in store for his future. For the last three months, Tyler has been on tour both in Europe and the U.S. His indie and acoustic rock songs have made their way into the ears of people around the world. After 23

shows in Europe followed by 28 shows in the U.S., he looks back on the days he began posting YouTube videos and still can’t believe how it led to his current success. After graduating from high school in his native Denver, Tyler played college football at the Air Force Academy. “It was more to please people,” he says. “And then I realized how kind of idiotic that was because I was so unhappy for six months. But it was a good decision. I learned a lot of discipline there and I learned how to work out regularly. Then I took that discipline and just applied it to the music world.” During his time at the Academy, he got together with two other students, a bass player and a drummer, on their time off to make music. NKDMAG.COM 57 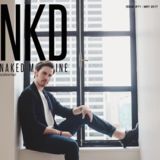