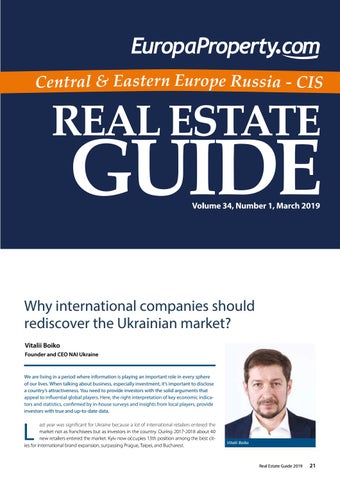 market not as franchisees but as investors in the country. During 2017-2018 about 40 new retailers entered the market. Kyiv now occupies 13th position among the best cities for international brand expansion, surpassing Prague, Taipei, and Bucharest.

Thus, H&M opened its first store in Kyiv. IKEA made an official statement that it would open the doors of its first store in August 2019. One of the reasons that international players have rediscovered Ukrainian potential was the right interpretation of all statistical and analytical data of the local market. The Ukrainian economy is known for its shadow economy, so while collecting the statistical data one should keep in mind the shadow economy adjustment tariff. According to the National Office of Statistics of Ukraine, the shadow economy of the country is 20 percent. But, according to the International Monetary Fund, the size of the shadow economy in Ukraine is 44 percent. At the end of the day, official macroeconomic indicators may seem quite controversial. Though all of them should be carefully explained to the international players due to the market specificity. Statistical manipulations and consumer behaviour To start with the retail market, it is a wellknown fact among the local players that true retail turnover does not correspond with the official statistics, despite official data showing grows again after the huge decrease in 2014. The non-transparent system doesn’t make clear the actual information, which reveals the real situation. All players are obliged to make their own research and use their own coefficients, statistics in order to have a real picture of the Ukrainian economy. Thus, such studies show that official statistics don’t show the true situation at almost every level. Due to the big size of the shadow economy, the official economy collects

only pieces of information, which does not correspond to the real figures. As a result, they seem unpromising for investors. Sometimes official statistics data mislead in a different way. For instance, in 2017 the way gross retail turnover in Ukraine was calculated was changed. As a result, today’s tables show contradictory figures, which should be carefully explained. Absolute measures of retail turnover provided by the Office of the National Statistics of Ukraine for 2017 are substantially smaller than the same measures for 2016. Hence, without knowing the true reasons for the decrease, international companies might decide the Ukrainian market is very unappealing. Though, while specifying the relative growth index, 8 percent growth is seen. It is one of the best results in Europe.

As a result of the in-house customer behaviour analysis and social surveys to calculate the level of real salaries in the capital and beyond Kyiv, it is a fact that the margin of error is around 5 percent. This survey shows that real salaries are much higher – 30 percent higher when compared to the official statistics, and almost twice as high in the big cities. In 2017 compared to 2016 salaries grew by 66 percent. In 2018 the growth was about 24 percent. GDP per capita vs GDP per purchasing power parity Every investor judges a country’s attractiveness by GDP per capita. Here in Ukraine, however, official statistics do not correspond to the real figures. Though, nowadays it’s not correct to do so as this measure fails completely when it comes to wellbeing. Remember 2010, the year everyone admired China, which became the second biggest economy in the world. That year Chinese GDP grew so fast that it finally dislodged Japan, making China second to the United States in economic terms. It is worth mentioning that everyone assessed China in terms of GDP per purchasing power parity (PPP), while the Ukrainian economy presented in the international reports was assessed by GDP per capita. Interestingly that Ukraine’s GDP (PPP) was the same as China’s. Today the international business community is watching the rapidly growing Indian economy. But history is repeating itself. If we compare these countries by GDP (PPP), today Ukraine is stronger than India.

Perhaps it is unfair to compare Ukraine with India or China considering the size of the population, territory and other factors. Ukraine is not as large as the Asian countries, but in Europe it is one of the biggest economies. The country’s GDP is bigger than the overall GDP of the Baltics, Slovakia and twice as big as Bulgaria. Ukraine is known as one of the cheapest countries in terms of the cost of goods and services. So, it is not fair to compare goods and services produced in Ukraine with those produced in Israel or India. Considering GDP per purchasing power parity, Ukraine comes 15th amongst European countries and surpasses Portugal, Denmark, Finland; in the global ranking, it even surpasses Qatar and Israel taking 50th. And this is official data, without considering the shadow economy. Take that into account then Ukraine comes 12th in Europe, level with Austria. The purchasing power of the Ukrainian population differs from official statistics on average by 30 percent. Even considering the data provided by the Office of National Statistics of Ukraine, the figure reached $16 billion for the first half of 2018, which is higher than the overall expenses of the population of the Baltic countries.

The impact of geopolitical problems on the economy should not be exaggerated We should also stress, that in the last five years the Ukrainian economy has been under pressure from dramatic military and political events. This was one of the key reasons’ investors didn’t consider our country for further development. Currently, even using official data, we see the signs of a recovery, in almost all spheres. For example, the industrial sector, which has been severely affected by the loss of control over the industrial centre in the eastern part of the country and the devaluation of the national currency in 2013-2014, was hit by a severe slump in 2014. But today’s figures are quite positive, even in comparison with its European neighbours. The dynamic volume of construction work in terms of money is growing (in the national currency). It has, however, owing to several waves of devaluation, still not reached the pre-crisis figures of 2013-2018. Despite this the volume has surpassed those of small developed European countries like the Baltics, Cyprus, and Malta. Considering commissioning, Ukraine is one of the leaders in Europe and corresponds to the Polish and British volume of construc-

tion. Concerning the supply per 1,000 residents, the results are not so high but still corresponds to the level of most European countries. The most difficult area is capital investment. The market needs 50 percent growth to be able to reach the levels of 2013. Still, Ukraine is an important country in terms of its volume of capital investments worldwide. The country is ranked 63rd globally. All these facts, together with the current positive dynamics allow us to consider Ukraine as one of the biggest and underestimated European economies.

The material is based on the official statistics and in-house analytics of NAI Ukraine (www. naiukraine.com) 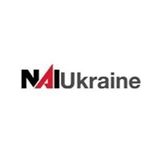 Why international companies should rediscover the Ukrainian market?

The article on the Ukrainian economy by Vitalii Boiko, CEO and founder of NAI Ukraine, issued for Real Estate Guide by EuropaProperty.com

Why international companies should rediscover the Ukrainian market?

The article on the Ukrainian economy by Vitalii Boiko, CEO and founder of NAI Ukraine, issued for Real Estate Guide by EuropaProperty.com