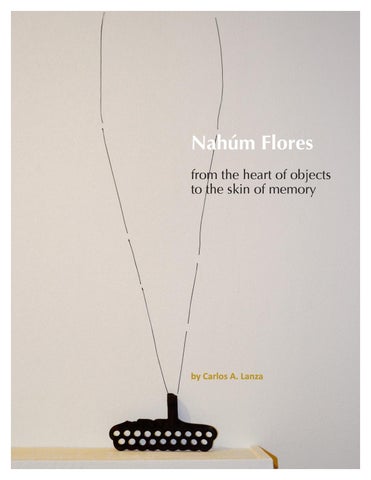 by Carlos A. Lanza

Objects convoke, attract, glimpse; they are unfading memory, perhaps the charm of an instant. Nahúm Flores, a Honduran artist residing in Canada, articulates a compendium of objects that, whilst facing the vacuum often posed by the contemporary, redefine our environmental perception: nostalgia abandons its tone of sadness and melancholy, and reality becomes absolutely symbolic, directing our sensibilities toward zones that are more vital and transcendent; these objects behave with a sense of belonging that, until recently, was made invisible by the culture of usefulness. Some of the objects are part of the artist’s experiences, and have been subjectivized according to the meaning and significance Flores has given to them; other objects have made their way to him by contingency or through someone else’s generosity, in either case, these form part of both individual and collective memory; they are agents transmitting memory, tracks marking destinations or intent; they are the skin of memory: smoothness or scar, but simply human memory in the end. Seeing them held there in time, one perceives fragments of an existence moving between transcendence and the precarious: things possess the particularity of negating or affirming. Recollections sliding into memory may pass through fields of light or inhabit the skin of gloomy caverns: it’s Renoir’s brush or the torturer’s prod.

The Inheritors Exhibition at the Museum of National Identity Tegucigalpa, Honduras 2016

Industry has produced the peasant’s shovel, a mechanic’s pliers, the carpenter’s hammer, a miner’s lamp; in short, it has produced the objects needed by the work of a society; at the same time, however, the industrial object has blurred the person who produces it, thereby converting the person into a by-product of post-industrial society. Technical improvements have intensified production while simultaneously generating the counterintuitive nature of existence. When Nahúm Flores undresses these objects by stripping them of their utilitarian guise, he leaves behind the nudity of human effort, the primordial intention of creating, of transforming, of feeling matter in one’s own hands, of shaping an idea, of opening pathways; objects touched by the mystery of their creation–not their production–they set up within us like extraordinary vectors of sensitivity: we travel from the surface of those objects to the skin of memory.

Stripped of their false utilitarian brightness, the rust of an object or its own opacity may become renewed qualities, the texture of a distinct experience emboldened by the desire to live, to feel, to love far beyond things. Collecting objects to show them as part of an anthropology of aesthetics, makes Nahúm Flores a serious artist, one who clarifies the function of an artistic object as a sign which opens multiple perspectives of meaning. Flores moves toward the object with a critical view provided, however, with a tenderness that is moving: the dilapidated cemetery of debris, in the hands of Nahúm Flores, can be a warm space where memory winks its eye at recollections calling us back to life again. Tegucigalpa, 9 May 2016