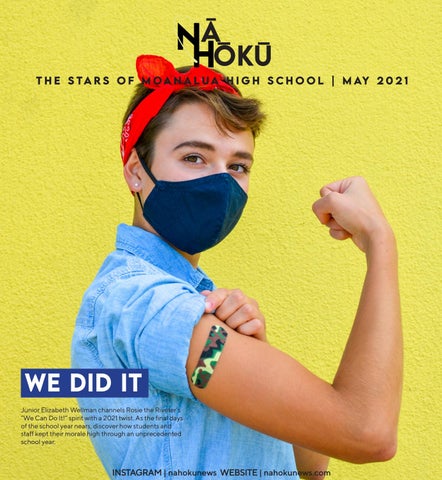 we did it Junior Elizabeth Wellman channels Rosie the Riveter’s “We Can Do It!” spirit with a 2021 twist. As the final days of the school year nears, discover how students and staff kept their morale high through an unprecedented school year.

his year has been full of challenges; with the pandemic and online learning, we were all pushed to our limits. As a senior, it was hard to remain motivated throughout the year without special events like prom and senior luau. However, for seniors, we are almost at the finish line. Graduation is only days away and then the start of our new chapter in life. As I think back to my time at Moanalua, I am proud to call myself a Menehune. No matter the challenges, Menes persevere and try their best. As this is our last issue of the Na Hoku O Moanalua magazine for the school year, our staff wanted to highlight how students and teachers coped during the pandemic, announce the seniors’ post-secondary plans, and capture some of the fun moments throughout the year. I encourage you to read about students&#39; accomplishments such as Taylor Katahira&#39;s Instagram Hope For Hawaii. Also, enjoy photos of seniors making their moments count. For the freshman, sophomore, and juniors, finals are a week away. I know this year has been exhausting, but finish strong. Come back to campus next year reinvigorated. Seniors enjoy your last moments as a high schooler before we cross that stage, which symbolizes the transition to our new adult lives. Our staff has worked hard this year to uphold our mission of “recording history, reporting the truth, and recognizing excellence.” We hope our goal was achieved this year and that every Mene has learned from our website, Instagram, podcasts, and magazine. Please enjoy our last issue and have a happy and safe summer. Britney Maddox, Editor In Chief

Everyone has different ways to deal with stress, anxiety, and all the troubles of school. A couple ways that students have coped with have been playing video games, using music to cope, hanging out with friends or even reconnecting with old ones, and picking up a new hobby.

1. TAKE A BREAK It can be hard to focus on school at home, an environment you normally find comfort in. Sometimes you just need to take a step away from school work and take a break. “When I felt [upset] or had a loss of motivation, I would read or play video games to clear my head until I was ready to tackle school work again. It would get me to take a break from my thinking process and when I returned to the assignment at hand, it was like something clicked and I was able to smoothly complete it,” said sophomore Yannie Cheng.

2. HANG OUT WITH FRIENDS “Hanging out with friends and reconnecting with old friends helped me cope throughout the school year. Human interaction is essential [in] this day and age. Knowing that someone would help me through thick and thin comforted me. During the pandemic, I reconnected with my peers from middle school and even those who moved to different states!! This filled the gap, forming those relationships, those bonds I left a few years back,” said junior Micah Tutuvanu.

In the words of Henry Longfellow, “Music is the universal language.” No matter what genre of music you listen to, music can be a great motivator or relaxer. “Listening to [Kpop] music has helped me with getting through each boring day as music gives me energy to keep being productive,” said sophomore Rayna Maika’i.

4. FIND A NEW HOBBY It’s never too late to try something new. Picking up a new hobby can be a refreshing change of pace. “I’ve been mostly working on self improvement such as taking care of my mind, body, and soul. But I’ve also been trying out new things such as new hairstyles, clothing options, etc. basically quarantine for me has been one big experiment on how I want other people to perceive me,” said senior Katin Thompson. Photo courtesy Katin Thompson

During homecoming floorshow senior Jack Schwab shows off his moves.

Moment Count With graudation in a week, seniors are preparing to say goodbye to

Moanalua. Unlike past years seniors were not able to attend events such as prom and senior luau. However during the times social events were allowed, they made sure they were making the moments count.

The girls soccer team held a senior night event despite not having an offical season.

Taylor Katahira, Moanalua High School’s Senior Class President, is more than just a student leader, she is also a strong advocate for mental health issues and education. Katahira’s “Hope for Hawaii” senior project is her personal way of building a stronger community and starting the hard conversation surrounding mental health issues and the effects that the current pandemic is having on students psychologically. The project is personal because Katahira has struggled with depression and anxiety herself. For many students, the effects of coronavirus and social distancing have amplified feelings of loneliness. For seniors who are graduating, the isolation can be especially hard as they move on to the next phase of their lives. “I was expecting [this], but you know you kind of take things day by day and ... keep some hope in you that things will get better and…[we]are still in this together,” Katahira said thoughtfully. “We might not go back to normal anytime soon, but we will get there.” As part of her project, Katahira conducted a survey last fall to better understand how the students have been affected by the pandemic. A total of 349 students participated in the survey, with most saying they were negatively affected by mental health.

Katahira continues her efforts through her Instagram account, @hopeforhawaii, that features mental health focused content. Katahira offered some advice for students who may be struggling during the pandemic: “Just have a conversation with someone. You don’t have to talk about your problem. Companionship of talking to someone could help a lot.” She also had advice for adults who may not know the supportive role they can play. Parents, teachers and counselors are “our lifeline for mental health... whether they realize it or not.” Katahira said they are role models that students look up to and depend on. “I know it’s hard to open up and be vulnerable with people, but just taking that one step or reaching out to at least one person or even just your siblings, your parents can make the biggest difference.”

Teaching through a pandemic ARIANA PATALINGHOG | STAFF WRITER This year was a year of firsts for many of us; students, teachers, and staff alike. Throughout the experimental ups and downs of this year, Moanalua Faculty have shown utmost dedication to the school and students. Each with their own COVID-19 survival tips, they overcame the continuous obstacles thrown at them from the beginning to the end of the school year. “It&#39;s been a process of learning to be flexible for both teachers and students. I&#39;ve asked my students for patience as I&#39;ve tried to figure out the best and most effective way to communicate the academics,” said English teacher Shelly Koyanagi. Finding a practical and personal balance together with students was one of the biggest challenges teachers faced this year. The new virtual schedule along with technological difficulties justified the struggle of distance learning. “It was challenging to develop new fun and engaging lessons for our virtual learners,” said Graphics teacher Leroy Makekau. The sudden shift to virtual learning made it difficult for in-person dependent classes to teach material via Google Meets. However, as teachers and students settled in and adjusted to the situation at hand, they started to see change, success even. “We&#39;re a team, and together, we&#39;re going to work hard to make good things happen,” Koyanagi added. “This year I survived with a lot of faith and hope. I think my students learned a lot about different lifestyle choices and they also learned about who they are as a person. I had learned a lot about myself as well,” said Peer Education teacher Kelly Kaholokula.

“This year I survived with a lot of faith and hope

Kelly Kaholokula Peer education teacher Teachers, too, discovered new parts of themselves, new ways to relieve stress and keep pushing forward. “I learned alongside my students more than usual,” said World History and Japanese teacher Eric Bentkowski. Everyday, their brains were racked for their students&#39; sake, eventually they started using this brain power to learn about themselves as well. The challenges produced fresh ideas and gave staff time to challenge and improve their daily routines. “What pushed me through the school year was focusing more on my mental and physical health like getting more rest, working out at the gym, and training kickboxing and Muay Thai,” said Makekau.

Having much more time at home this year may have sparked a need for some kind of activity, otherwise unachievable without true and total boredom. Others found comfort in the various achievements of their students which inspire them to better themselves and be a better role model. Staff truly felt blessed to indulge in the art of simply ‘surviving’ during the pandemic. “There is a saying that it is better to give than to receive,” said Math teacher Aimee Sze. She started giving small gifts to her colleagues to remind them they were all in it ‘together’ which she says, “doing little things like this helped a lot.” Staff and students alike share their willingness to look deep within themselves and start to change, especially due to the special circumstances of online learning. A small change here and there made great impacts on teacher’s personal lives, as it shows in their professional lives too. In a way, staff were able to give back to themselves and inspire others in the process. “Change your questions and change your world,” said Bentkowski. Teachers developed in countless ways, pulling together pieces of information to complete their very own ‘survival kit’. Moanalua teachers and staff know now, better than anyone, how to ‘survive’ in a pandemic.

espite the challenges of distance learning our staff powered through and finished the year with amazing accomplishments; from state-level to frequent websites updates - we did it! We’ve learned to adapt and overcome challenges thrown at us and are eager to return next year to continue our duty of recording history, reporting the truth, and recognizing excellence.

Our mission is to report news within Moanalua High School and the surrounding community as impartially as possible, while maintaining transparency and accountability as journalists. Being members of the media, we exercise our first amendment rights to free speech and a free press. Our core principles follow the Society of Professional Journalists code of ethics, centering around seeking the truth, treating members of the school and community with respect, serving the school, and taking responbility for our actions. 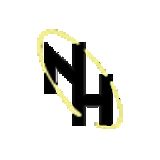