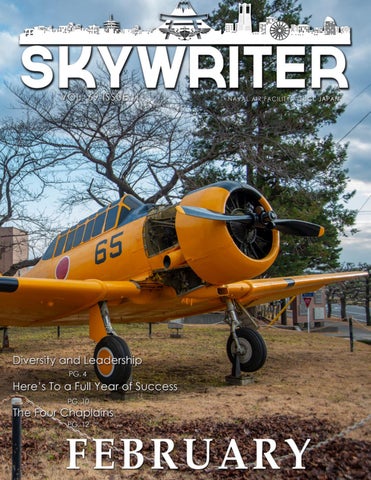 Here’s To a Year Full of Success Page 10

MEMBERS OF NAVAL AIR FACILITY ATSGUI’S AIMD DEPARTMENT AND SECURITY FORCE WORKED TOGETHER TO TRANSPORT THE NORTH AMERICAN AVIATION T-6 TEXAS (SNJ-6) STATIC DISPLAY BACK TO ITS DISPLAY LOCATION BEHIND THE MACARTHUR STATUE AFTER IT’S RESTORATION.

CMDCM CORNER With Command Master Chief Daniel Irwin Shipmates, welcome to the first edition of the 2020

Skywriter, so Happy New Year! This year is already

is a historical announcement as the next carrier will be

events we have lined up.

hero and recipient of the Navy Cross!

We have the Cultural of

There is always so much to do on and off the installation,

by the Pacific Fleet Training Team; Tomodachi Bowl will

so take advantage of these opportunities while you are

be played here on March 8th; our annual Springfest on

stationed here in Japan. The team here at NAF Atsugi

makes every effort to communicate every opportunity

seeing the community at each of these events.

through a multitude of media streams, so please take a

During the last segment of our bi-weekly Captain’s

Call, we mentioned the Acting Secretary of the Navy’s

VECTORS.” If you have not had the chance to read these,

That’s all for this month. Thank you for all you do,

I highly recommend you do as this is SECNAV’s new

and remember, if you have any questions, ASK THE

method of communicating to the force on his priorities,

initiatives and other valuable matters. For example, his latest edition, Vector 8, speaks on the importance of our “Partners and Allies.” Our presence in Japan is the heart of this topic and we all need to be aware of the importance of these relationships that we are able to build. Also in this edition, he spoke about the name of our next planned

The dedication of the first chapel built on Naval property was held at Annapolis, Md.

The battleship Maine explodes in Havana Harbor and nearly three-quarters of the battleship’s crew die as a result of the blast. Popular opinion blames Spain, and the Spanish-American war starts soon after

Story by MC3 Olivier Clement Photos by MC3 Jacob Smith Diversity and leadership are core elements to the success of the US Armed Forces. In February we celebrate this intersection in our observation of Black History Month. According to the Defense Equal Opportunity Management Institute (DEOMI), “Black History Month is an annual celebration of achievements by African Americans and a time for recognizing the immeasurable impact they have had on the history of the United States.” Needless to say, this historically extends into the Navy as well, however, it is an ever evolving process.

By encouraging Sailors and Civilians from a diversity of backgrounds, skill sets and experiences into leadership positions, the Navy is ensuring the success of its mission for years to come. According to Chief Legalman, Ryan Pickens of Naval Air Facility Atsugi, “Being an African American leader in the Navy is not only a privilege, but also an awesome responsibility. It means that the building blocks of tomorrow’s Navy rests in my hands.” It is with this in mind that our leaders work to constantly educate and develop those around them; “It doesn’t matter your race, your background, or your

“However, as a leader what I try to teach is that it’s okay to let your guard down a little bit and not fall into the norm of where you have to act in a way that is expected by society, which is to be bundled up and closed off. It’s important to be open to new things and to be open to change.”

previous experience,” says Pickens, “The Navy treats everyone as equals and tries to instill leadership in every one of them.” According to Pickens, this leadership stems from the Core Values of the Navy. “I honestly believe that our Core Values of Honor, Courage, and Commitment make me a better leader. I’ve also learned that as a leader if I apply our Core Values to my personal and professional life, I also become a better person.”

Leaders will face challenges regardless of the Sailors they are trying to develop, but the Navy can ensure that more Sailors feel included and if leadership reflects their diversity. During this February, therefore, we honor the achievements of our African American Sailors and leaders in the past, and in anticipation of a successful future.

From the Readership Yokohama Chinatown Photograph by Stefanie Lynn Hendra

The tradition of making resolutions for the New Year has been around for millennia. Some sources date it as far back as 4000 years to ancient Babylonia. This is unsurprising as the New Year brings opportunity and a symbolic end to the mistakes of the previous year. However, as many find, the resolutions to which we so ardently commit, tend to fade by mid-February. Perhaps the reason for failure is not the change itself but the word we use to describe it. Resolution is defined as a “firm decision to do, or not do, something,” implying that if you falter, you have irreparably failed and there is not point to continue. However, simply changing the word may assist in success.

Instead of resolution, we can instead use the word ‘goal.’ A goal is ‘the object of a person’s ambition or effort; an aim or desired result’; in other words, something to strive for and the culmination of every action taken. Setting a goal also allows individuals to set benchmarks for themselves—stepping stones that serve as indicators of progress instead of failure. Changing the word can also change the mindset and may encourage people to stick with the change they want to see, regardless of small, inevitable, setbacks along the way. LT Matthew Baglini, of Helicopter Maritime Strike Squadron (HSM) 77, uses ‘themes’ instead of resolutions or goals. According to Baglini, “deciding on a theme

me to realize how much better I could treat myself while still upholding my obligations to others. I’m a much healthier and happier person because of it.” This year, LT Baglini has adopted on a theme of ‘Sustainability’ despite the challenges of an upcoming Permanent Change of Station (PCS) and potentially buying a home. Other themes that Baglini has found rewarding have been ‘Absolute Sincerity’—abstaining from sarcasm and being direct in dealings and intentions— and ‘Forgiveness’—looking for the best in everyone. This year, if you decide to implement changes to your life, know that there are many methods available to you. Regardless if a resolution, goal, or theme appeals to you, be sure to remain dedicated and maintain motivation until you see the results you desire.

is choosing a perspective through which to view new situations in the New Year…I believe that themes are more useful than resolutions or goals because while the latter can fail and be scrapped, a theme can be more resilient and deliver long-term results.” Baglini believes that themes are much more effective because they do not change behavior, but instead “allow [an individual] to better understand why they do things or why things are the way they are.” Baglini has been using this method since 2012, and while his process to decide his new theme is “long and disorganized”, he stands by the fact that his method has yielded more success and happiness than a traditional resolution. “My personal favorite [theme] was ‘Radical Self-Care’ in 2018,” said Baglini. “I had structured a lot of my life around sacrificing my well-being for the convenience and sake of others, and that paradigm helped

Story by MC3 Jacob Smith Stamp by Louis Schwimmer Every service member in the United States military enlists understanding the possibility of making the ultimate sacrifice for their country, their loved ones back home and their brothers and sisters-in-arms besides them. Whether it is on Naval Air Facility Atsugi in February 2020, or the freezing North Atlantic Ocean in February 1943, it takes a brave soul to serve.

“Four Chaplains Day” is celebrated every February 3rd, on the anniversary of the SS Dorchester’s sinking. When attacked by a German submarine in the early morning hours, the four chaplains, also known the “Immortal Chaplains” and the “Dorchester Chaplains,” gave up their life jackets when supplies ran out, helped their fellow Soldiers board lifeboats, and eventually gave up their seats so others would have a chance to escape. While only 230 of the 904 passengers survived until rescue came-as many had succumbed to hypothermia from the freezing-cold water-the intent of the chaplains is not diminished. To this day we celebrate those four men who knowingly sacrificed their only chance of survival in hopes of giving someone else a chance at life.

The impact of their sacrifice was recognized posthumously as all four men were given awards of the Distinguished Service Cross and Purple Hearts.

Congress also approved the creation of a new medal, the Four Chaplains’ Medal, which would carry the same weight as the Medal of Honor, since they did not meet the criteria to receive it. President Harry S. Truman also dedicated ‘The Chapel of Four Chaplains’ in the basement of Grace Baptist Church of Philadelphia in 1951. Their sacrifice continues to be honored by the Chaplain’s Corps, setting an example for those in any branch.

“A huge lesson is the value of diversity, and finding a unified purpose in the midst of it,” said Schleusener. “In the midst of that diversity, they had a strong sense of purpose. They gave their gloves away so that others would have some protection from the elements, their life jackets so that other could survive the waters. They did it so others may live. Chaplains of different faiths came to the same decision, making the ultimate sacrifice so others may live, and still found ways in that moment of extreme need to be praying, supporting and encouraging each other as they went to meet their Maker. Diversity can be beautiful like every color of the rainbow, diversity can be a source of strength, when you have that unified purpose bringing it together.”

“Life is a little like a jigsaw puzzle you’re trying to put together without an image to go by, that’s where heroes come in,” said Command Chaplain Cmdr. David Schleusener. “When you have a hero, you have a model like the picture on the box, so when we’re going through difficult times, we have heroes who show us how to fit the difficult pieces together. That’s the main reason why the example As they signed away their only chance at survival of the Four Chaplains is valuable. and embraced their icy-cold fate, the Four Chaplains shared a final lesson of selflessness, bravery “Whenever there’s a factor of difficulty to my and unity with their crew, a lesson that stands as work, when it doesn’t seem to have an immediate relevant now 77 years later as it did that tragic early payoff or resolution, I’m reminded of those morning. ultimate examples of sacrifice, to get through with the daily grind and hassles, and to deal with that in order to help improve the life of Sailors today,” said Schleusener. “Ultimately, if needed, I want to be someone who’s willing to lay down his life for someone else. That is my end goal, but to get there, it takes daily habits of doing something small, for the sake of others. It’s the practice of doing good habits every day that helps someone grow into that good person.” These four Army Chaplains, one a Methodist Minister, one a Rabbi, one a minister in the Reformed Church in America and one a Catholic Priest, were seen by eye-witnesses together arm-inarm, praying for each other and singing hymns as they went down with the ship. 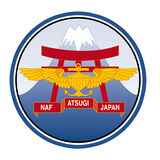