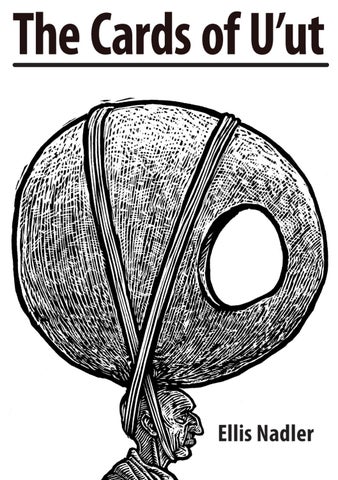 Without limiting the rights under copyright reserved above, no part of this publication may be reproduced, stored in or introduced into a retrieval system, or transmitted, in any form or by any means (electronic, mechanical, photocopying, recording or otherwise), without the prior written permission of both the copyright owner and the above publisher of this book.

Preface “After a sleep lasting aeons, the tiny god U’ut* awoke to find the world much changed. Humanity was plummeting into the dark pit of nihilism, and with time running out U’ut desired to be known once more. Accordingly he despatched his faithful hound Okortion† to seek me out. As the Elect of U’ut I was charged with the task of spreading his Word. Under the supervision of Okortion I laboured for two years engraving 37 wooden tablets encapsulating His Laws, the socalled Way of U’ut....” So begins the narrative that was running in my mind as I worked on the 37 woodblock prints reproduced here as The Cards of U’ut. Originally conceived as part of a performance art piece, the project has transmogrified in unforeseen directions including the publication of this unique deck of tarot cards. These cards can be seen as a work of art, a piece of autobiography, an elaborate prank, a method of divination, or all four things at once. The imagery is darkly humorous with several recurring symbols and themes, however it is for each reader to interpret the cards in the light of his or her own experience. When used in cartomancy the cards should be thoroughly shuffled, then cut at random and set out in any of the traditional tarot patterns e.g. three in a row (denoting past, pre* rhymes with “who hoot”

sent and future), three pairs in a row, as a wheel etc. The cards are designed to be combined in endless permutations, consistently giving rise to fresh metaphors and meanings. For a shorter reading, it is sufficient to select a single card; this can be just as effective because in a sense each card contains all the rest. On a technical note, the cards in this deck are roughly two thirds of the size of the original images (traditional monchrome woodcuts printed off Japanese magnolia wood blocks measuing approximately 30cm x 20cm). For this edition the woodcuts were scanned and digitally coloured. The second arcana of 41 cards is currently in production. London 2011 E.N.

The world before naming Before protennoia Haphazard collisions In measureless night Not waking or dreaming Mind floating, chaotic Awaiting the Poet To set things to rights

Suspended and weightless Infused with unknowing Awaiting the flatus Of egoâ&amp;#x20AC;&amp;#x2122;s sour breath Take rest and refreshment In timeless gestation The waters are breaking This birth is your death

Uâ&amp;#x20AC;&amp;#x2122;ut grew impatient His people were callow Their progress was sluggish Timid and shallow He hammered a warning The tree split asunder Disclosing this secret Numinous tarot

Slender hound of Uâ&amp;#x20AC;&amp;#x2122;ut Was outstripped by her legs With her nose left behind She could not find meat Curb the dog of desire Constrain your ambition Know the thoughts of the wise Keep pace with their feet

Fair cumulonimbus Passing over your head These clouds teach a lesson That you misconstrue O ungrateful scoundrel! The bailiffs are knocking The Cloud Doctorâ&amp;#x20AC;&amp;#x2122;s payment Is long overdue

At a fork in the Path Stand the twins of Uâ&amp;#x20AC;&amp;#x2122;ut One brother is crippled His double is blind Two uprooted signposts Haphazard directions An uncharted road to The place of no mind

The ferocious Wazir Was right hand to Uâ&amp;#x20AC;&amp;#x2122;ut He massacred millions For one grain of sand Ensconced in a crevice Till hell freezes over An inner voice pecks at His pineal gland

Surrender your waters Embrace evanescence The clouds pay obeisance To those who let go Seven fingers of fate Slowly tighten their grip Become like a vapour Let go â&amp;#x20AC;&amp;#x153;letting goâ&amp;#x20AC;?

U’ut’s mighty antlers Are bearing the faithful On life’s random voyage Towards their demise Infallible master Supreme navigator We pilot our ship by The light of your eyes!

Cocky cock of the walk Now due for comeuppance Hubristic and haughty Not crowing at dawn The farmer is falling His well has been poisoned The bank is foreclosing Your luckâ&amp;#x20AC;&amp;#x2122;s overdrawn

From serpent to gallows Deathâ&amp;#x20AC;&amp;#x2122;s dragnet is closing Make haste to the lifeboats Departure is nigh The hidden made patent Four pillars so blatant An elephant blazing Within your own eye

A crier proclaiming The seed that was planted Before your conception Has sprouted at last Your heart is a channel Eternal, recurrent Fulfilling the edicts Laid down in the past

A window on nothing A message from nowhere Uâ&amp;#x20AC;&amp;#x2122;ut sends an envoy With each living breath Each bearing a Hepworth Unblemished and flawless So perfectly balanced Between life and death

A bull is held captive Enraptured by birdsong A blackbirdâ&amp;#x20AC;&amp;#x2122;s admission The cage is unreal A rich man imprisoned Bedazzled by mammon To regain his freedom He need only kneel

Three knots to untangle For an upside down boy His wet nurse has vanished Sheâ&amp;#x20AC;&amp;#x2122;ll never return Three knots for remembrance Of things long forgotten Ignite your rondavel And watch the world burn