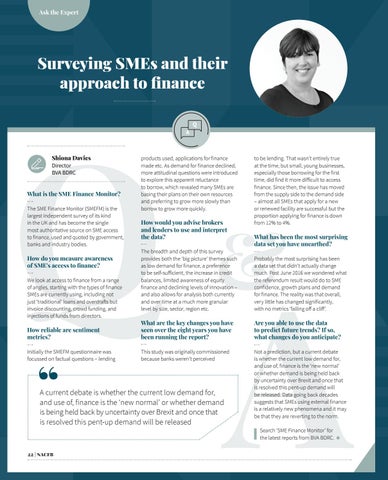 Surveying SMEs and their approach to finance

What is the SME Finance Monitor?

The SME Finance Monitor (SMEFM) is the largest independent survey of its kind in the UK and has become the single most authoritative source on SME access to finance, used and quoted by government, banks and industry bodies.

How do you measure awareness of SME's access to finance?

We look at access to finance from a range of angles, starting with the types of finance SMEs are currently using, including not just ‘traditional’ loans and overdrafts but invoice discounting, crowd funding, and injections of funds from directors.

How reliable are sentiment metrics?

Initially the SMEFM questionnaire was focussed on factual questions – lending

products used, applications for finance made etc. As demand for finance declined, more attitudinal questions were introduced to explore this apparent reluctance to borrow, which revealed many SMEs are basing their plans on their own resources and preferring to grow more slowly than borrow to grow more quickly.

to be lending. That wasn’t entirely true at the time, but small, young businesses, especially those borrowing for the first time, did find it more difficult to access finance. Since then, the issue has moved from the supply side to the demand side – almost all SMEs that apply for a new or renewed facility are successful but the proportion applying for finance is down from 12% to 4%.

How would you advise brokers and lenders to use and interpret the data?

A What has been the most surprising data set you have unearthed?

The breadth and depth of this survey provides both the ‘big picture’ themes such as low demand for finance, a preference to be self-sufficient, the increase in credit balances, limited awareness of equity finance and declining levels of innovation – and also allows for analysis both currently and over time at a much more granular level by size, sector, region etc.

Probably the most surprising has been a data set that didn’t actually change much. Post June 2016 we wondered what the referendum result would do to SME confidence, growth plans and demand for finance. The reality was that overall, very little has changed significantly, with no metrics ‘falling off a cliff’.

What are the key changes you have seen over the eight years you have been running the report?

Are you able to use the data to predict future trends? If so, what changes do you anticipate?

This study was originally commissioned because banks weren’t perceived

Not a prediction, but a current debate is whether the current low demand for, and use of, finance is the ‘new normal’ or whether demand is being held back by uncertainty over Brexit and once that is resolved this pent-up demand will be released. Data going back decades suggests that SMEs using external finance is a relatively new phenomena and it may be that they are reverting to the norm.

A current debate is whether the current low demand for, and use of, finance is the ‘new normal’ or whether demand is being held back by uncertainty over Brexit and once that is resolved this pent-up demand will be released 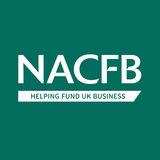