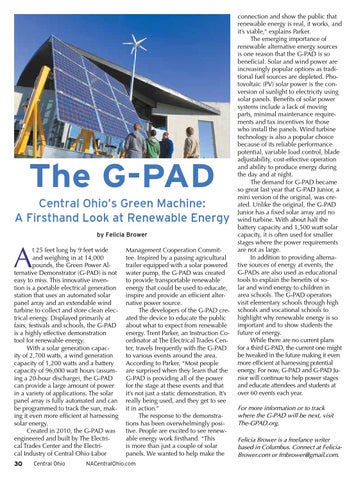 t 25 feet long by 9 feet wide and weighing in at 14,000 pounds, the Green Power Alternative Demonstrator (G-PAD) is not easy to miss. This innovative invention is a portable electrical generation station that uses an automated solar panel array and an extendable wind turbine to collect and store clean electrical energy. Displayed primarily at fairs, festivals and schools, the G-PAD is a highly effective demonstration tool for renewable energy. With a solar generation capacity of 2,700 watts, a wind generation capacity of 1,200 watts and a battery capacity of 96,000 watt hours (assuming a 20-hour discharge), the G-PAD can provide a large amount of power in a variety of applications. The solar panel array is fully automated and can be programmed to track the sun, making it even more efficient at harnessing solar energy. Created in 2010, the G-PAD was engineered and built by The Electrical Trades Center and the Electrical Industry of Central Ohio Labor

Management Cooperation Committee. Inspired by a passing agricultural trailer equipped with a solar powered water pump, the G-PAD was created to provide transportable renewable energy that could be used to educate, inspire and provide an efficient alternative power source. The developers of the G-PAD created the device to educate the public about what to expect from renewable energy. Trent Parker, an Instruction Coordinator at The Electrical Trades Center, travels frequently with the G-PAD to various events around the area. According to Parker, “Most people are surprised when they learn that the G-PAD is providing all of the power for the stage at these events and that it’s not just a static demonstration. It’s really being used, and they get to see it in action.” The response to the demonstrations has been overwhelmingly positive. People are excited to see renewable energy work firsthand. “This is more than just a couple of solar panels. We wanted to help make the

connection and show the public that renewable energy is real, it works, and it’s viable,” explains Parker. The emerging importance of renewable alternative energy sources is one reason that the G-PAD is so beneficial. Solar and wind power are increasingly popular options as traditional fuel sources are depleted. Photovoltaic (PV) solar power is the conversion of sunlight to electricity using solar panels. Benefits of solar power systems include a lack of moving parts, minimal maintenance requirements and tax incentives for those who install the panels. Wind turbine technology is also a popular choice because of its reliable performance potential, variable load control, blade adjustability, cost-effective operation and ability to produce energy during the day and at night. The demand for G-PAD became so great last year that G-PAD Junior, a mini version of the original, was created. Unlike the original, the G-PAD Junior has a fixed solar array and no wind turbine. With about half the battery capacity and 1,500 watt solar capacity, it is often used for smaller stages where the power requirements are not as large. In addition to providing alternative sources of energy at events, the G-PADs are also used as educational tools to explain the benefits of solar and wind energy to children in area schools. The G-PAD operators visit elementary schools through high schools and vocational schools to highlight why renewable energy is so important and to show students the future of energy. While there are no current plans for a third G-PAD, the current one might be tweaked in the future making it even more efficient at harnessing potential energy. For now, G-PAD and G-PAD Junior will continue to help power stages and educate attendees and students at over 60 events each year. For more information or to track where the G-PAD will be next, visit The-GPAD.org. Felicia Brower is a freelance writer based in Columbus. Connect at FeliciaBrower.com or fmbrower@gmail.com.