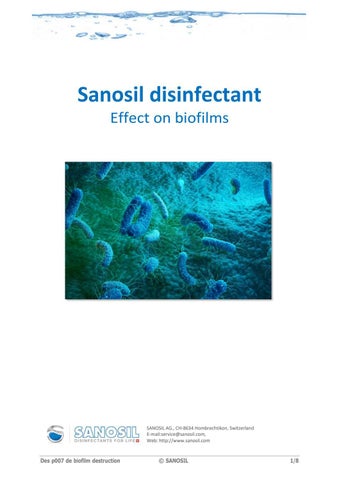 What are biofilms? Biofilms consist of a mixture of bacteria, fungi, protozoa and/or algae that live in a symbiotic community with and off each other. To us, they appear as a layer of slime or coating of varying thickness, colour and consistency, which forms predominantly at boundary layers of liquid and gas phases, such as pipelines, cooling towers, drains and other water-carrying systems. The typical slime matrix of a biofilm consists of extracellular polymeric substances (EPS) produced by the microorganisms, which can form hydrogels.

Biofilms and environmental resistance EPS consist of various long-chain polysaccharides, such as alginates and cellulose, which can form a stable matrix. They adhere very well to surfaces and allow microorganisms to colonise. As a result, they are not &quot;washed away&quot;. Life in a biofilm also offers further advantages for the microorganisms involved: they are supplied with food more uniformly, partially protected from drying out and, most of all, largely protected from biocides and other unfavourable environmental influences. In particular, their resistance to chlorine, ozone and UV radiation increases tremendously as the thickness of the biofilms increases.

VBNC status in biofilms: VBNC = viable but not culturable is the term used to describe the phenomenon whereby microorganisms, such as Pseudomonas, fall into a kind of &quot;shock rigidity&quot; or hibernation on contact with some disinfectants (especially chlorine). They reduce/stop their metabolic activities and cell division for a specific period of time, but are still present.

If a water sample is taken during this period and incubated on a nutrient medium in the traditional manner, no growth is observed. This produces incorrect results, as it incorrectly assumes that disinfection has been successful. Comment: Sanosil disinfectants have been shown to result in complete disintegration of the microbial genome, i.e. complete elimination without VBNC Des p007 de biofilm destruction

Biofilm control with chlorine dioxide ClO2 In technical literature, chlorine dioxide (ClO2) is generally recognised as an ideal agent for biofilm control. It has been proven that the germ count can be reduced (but not eliminated) with treatment cycles of more than 70 days with the maximum permitted dosage for drinking water of 0.2 mg/l. (Refer to Otte et al 2004, Lenz 2011) The corrosiveness of ClO2, however, regularly poses a problem (Hubbard et al., 2009). This is significant and in the long run, results in massive material damage – even to components made of glass. Furthermore, in many installations simply installing, operating and maintaining an (expensive) ClO2 system does not pay off. In these cases, an attempt is made to achieve a comparable result by dosing different chemicals/biocides. Comment: Sanosil disinfectants, when properly dosed, exhibit a far lower risk of corrosion than chlorine dioxide in comparable doses.

Resistance of biofilms to individual components: non-stabilised hydrogen peroxide OR silver Since both hydrogen peroxide as well as silver have proven themselves with reasonable success in water disinfection and/or preservation, the idea of also using these substances for biofilm control is a logical step. While this notion is on the right lines, it suffers from a decisive drawback: hydrogen peroxide alone (especially in its native state, i.e. not additionally stabilised) is subject to strong degradation by the catalase produced in the biofilm. Shock disinfections, for example, are only considered reliable from 10,000 ppm (10 ml/l) over several hours. Silver, on the other hand, especially when used alone, cannot easily penetrate the biofilm matrix and is often already precipitated on the surface of the biofilms. This means that the silver cannot apply its bacteriostatic/preservative properties in the best possible way.

Optimised effect of stabilised hydrogen peroxide on biofilms When common hydrogen peroxide comes into contact with biofilms, it tends to decompose very quickly. At times, this can severely limit its effectiveness. To unleash its optimum effect, the hydrogen peroxide must therefore be highly stabilised, as is the case in Sanosil disinfectants. This makes it possible to inhibit the decay of the hydrogen peroxide for a while after initial contact with the biofilm surface, thus allowing the peroxide to penetrate the structure of the biofilm. Reactive oxygen is then separated from the peroxide through the catalase of the biofilm. The bubbles that form have a physical/mechanical effect in addition to their oxidising effect on the microbial cell envelopes – due to the volume increase of the bubbles in the biofilm matrix, it is literally ruptured and torn apart. The blownoff biofilm fragments detach from the structure and leave holes, which, in turn, make it possible for more peroxide to penetrate the structure. Ideally, the entire biofilm layer is removed and dissolved within a short time.

3. Once inside, the peroxide begins to release oxygen

2. Their stability makes it possible for the peroxide molecules to penetrate the film structure

The oxygen bubbles accumulate, increase in volume and break apart the biofilm mass

Biofilm in a test tube with Sanosil disinfectant. The &quot;fragmenting&quot; effect of the oxygen bubbles is clearly visible.

Rinsing of detached biofilm layers after shock disinfection (1 ml of Super 25/l of water) from a water pipe.

Biofilm in a Petri dish

Wet with a few drops of 1 ml/l Sanosil Super 25 solution. Notable difference between wetted and unwetted.

Biofilm in a PVC hose

Shock disinfection with 1,000 ppm of Sanosil

Our application notes, both in written and verbal form, are based on extensive testing. We provide advice to the best of our current knowledge, but without any obligation insofar as the application and storage are beyond our direct control. Product descriptions or information about the properties of the preparations do not contain any statements concerning liability for any damage. 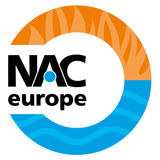