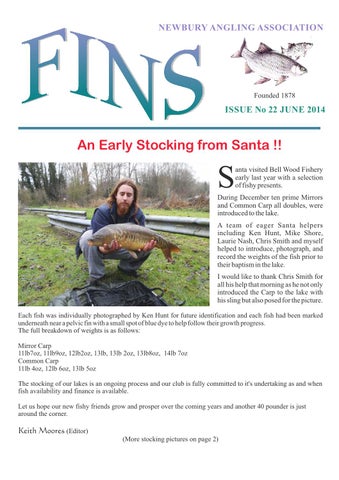 An Early Stocking from Santa !!

During December ten prime Mirrors and Common Carp all doubles, were introduced to the lake. A team of eager Santa helpers including Ken Hunt, Mike Shore, Laurie Nash, Chris Smith and myself helped to introduce, photograph, and record the weights of the fish prior to their baptism in the lake. I would like to thank Chris Smith for all his help that morning as he not only introduced the Carp to the lake with his sling but also posed for the picture. Each fish was individually photographed by Ken Hunt for future identification and each fish had been marked underneath near a pelvic fin with a small spot of blue dye to help follow their growth progress. The full breakdown of weights is as follows: Mirror Carp 11lb7oz, 11lb9oz, 12lb2oz, 13lb, 13lb 2oz, 13lb8oz, 14lb 7oz Common Carp 11lb 4oz, 12lb 6oz, 13lb 5oz The stocking of our lakes is an ongoing process and our club is fully committed to it's undertaking as and when fish availability and finance is available. Let us hope our new fishy friends grow and prosper over the coming years and another 40 pounder is just around the corner. The annual edition of the Newbury Angling ssociation magazine

The annual edition of the Newbury Angling ssociation magazine