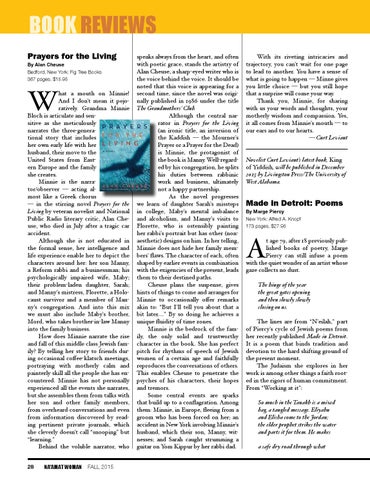 hat a mouth on Minnie! And I don’t mean it pejoratively. Grandma Minnie Bloch is articulate and sensitive as she meticulously narrates the three-generational story that includes her own early life with her husband, their move to the United States from Eastern Europe and the family she creates. Minnie is the narrator/observer — acting almost like a Greek chorus — in the stirring novel Prayers for the Living by veteran novelist and National Public Radio literary critic, Alan Cheuse, who died in July after a tragic car accident. Although she is not educated in the formal sense, her intelligence and life experience enable her to depict the characters around her: her son Manny, a Reform rabbi and a businessman; his psychologically impaired wife, Maby; their problem-laden daughter, Sarah; and Manny’s mistress, Florette, a Holocaust survivor and a member of Manny’s congregation. And into this mix we must also include Maby’s brother, Mord, who takes brother-in-law Manny into the family business. How does Minnie narrate the rise and fall of this middle class Jewish family? By telling her story to friends during occasional coffee-klatsch meetings, portraying with motherly calm and painterly skill all the people she has encountered. Minnie has not personally experienced all the events she narrates, but she assembles them from talks with her son and other family members, from overheard conversations and even from information discovered by reading pertinent private journals, which she cleverly doesn’t call “snooping” but “learning.” Behind the voluble narrator, who 28

speaks always from the heart, and often with poetic grace, stands the artistry of Alan Cheuse, a sharp-eyed writer who is the voice behind the voice. It should be noted that this voice is appearing for a second time, since the novel was originally published in 1986 under the title The Grandmothers’ Club. Although the central narrator in Prayers for the Living (an ironic title, an inversion of the Kaddish — the Mourner’s Prayer or a Prayer for the Dead) is Minnie, the protagonist of the book is Manny. Well-regarded by his congregation, he splits his duties between rabbinic work and business, ultimately not a happy partnership. As the novel progresses we learn of daughter Sarah’s missteps in college, Maby’s mental imbalance and alcoholism, and Manny’s visits to Florette, who is ostensibly painting her rabbi’s portrait but has other (nonaesthetic) designs on him. In her telling, Minnie does not hide her family members’ flaws. The character of each, often shaped by earlier events in combination with the exigencies of the present, leads them to their destined paths. Cheuse plans the suspense, gives hints of things to come and arranges for Minnie to occasionally offer remarks akin to: “But I’ll tell you about that a bit later....” By so doing he achieves a unique fluidity of time zones. Minnie is the bedrock of the family, the only solid and trustworthy character in the book. She has perfect pitch for rhythms of speech of Jewish women of a certain age and faithfully reproduces the conversations of others. This enables Cheuse to penetrate the psyches of his characters, their hopes and tremors. Some central events are sparks that build up to a conflagration. Among them: Minnie, in Europe, fleeing from a groom who has been forced on her; an accident in New York involving Minnie’s husband, which their son, Manny, witnesses; and Sarah caught strumming a guitar on Yom Kippur by her rabbi dad.

With its riveting intricacies and trajectory, you can’t wait for one page to lead to another. You have a sense of what is going to happen — Minne gives you little choice — but you still hope that a surprise will come your way. Thank you, Minnie, for sharing with us your words and thoughts, your motherly wisdom and compassion. Yes, it all comes from Minnie’s mouth — to our ears and to our hearts. — Curt Leviant Novelist Curt Leviant’s latest book, King of Yiddish, will be published in December 2015 by Livingston Press/The University of West Alabama.

t age 79, after 18 previously published books of poetry, Marge Piercy can still infuse a poem with the quiet wonder of an artist whose gaze collects no dust. The hinge of the year the great gates opening and then slowly slowly closing on us. The lines are from “N’eilah,” part of Piercy’s cycle of Jewish poems from her recently published Made in Detroit. It is a poem that binds tradition and devotion to the hard shifting ground of the present moment. The Judaism she explores in her work is among other things a faith rooted in the rigors of human commitment. From “Working at it”: So much in the Tanakh is a mixed bag, a tangled message. Eliyahu and Elisha come to the Jordan; the elder prophet strikes the water and parts it for them. He makes a safe dry road through what