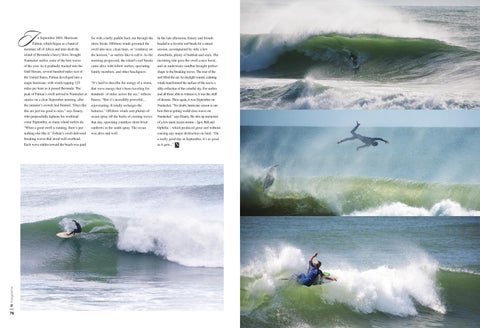 for with a hefty paddle back out through the

In the late afternoon, Emery and friends

headed to a favorite surf break for a sunset

moisture off of Africa and later dealt the

swell into nice, clean lines, or “corduroy on

session, accompanied by only a few

the horizon,” as surfers like to call it. As the

shorebirds, plenty of baitfish and seals. The

Nantucket surfers some of the best waves

of the year. As it gradually tracked into the

and an underwater sandbar brought perfect

family members, and other beachgoers.

shape to the breaking waves. The roar of the

Fabian, which began as a band of

the United States, Fabian developed into a

“It’s hard to describe the energy of a storm,

winds transformed the surface of the sea to a

miles per hour as it passed Bermuda. The

that wave energy that’s been traveling for

silky reflection of the colorful sky. For surfers

peak of Fabian’s swell arrived to Nantucket at

hundreds of miles across the sea,” reflects

and all those able to witness it, it was the stuff

sunrise on a clear September morning, after

of dreams. Then again, it was September on

rejuvenating. It totally recharges the

Nantucket. “No doubt, hurricane season is our

this are just too good to miss,” says Emery,

best shot at getting world-class waves on

who purposefully lightens his workload

ocean spray off the backs of cresting waves

come September, as many island surfers do.

of a few more recent storms – Igor, Bill and

“When a good swell is running, there’s just

rainbows in the sunlit spray. The ocean

Ophelia – which produced great surf without

was alive and well.

causing any major destruction on land. “On a really good day in September, it’s as good

Each wave ridden toward the beach was paid

From beekeeping to wedding planning to hurricane surfing, the September Issue captures early fall on Nantucket

From beekeeping to wedding planning to hurricane surfing, the September Issue captures early fall on Nantucket