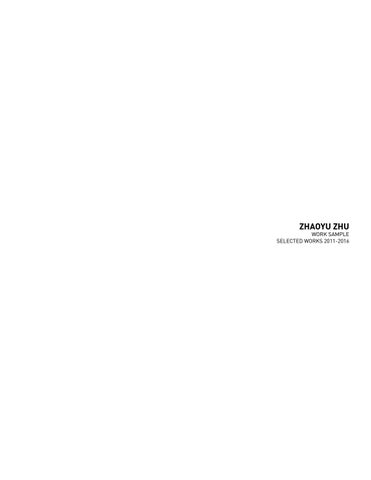 Axi:Ome, Summer 2015 Mentor: Sung Ho Kim Team with: Tianhui Hou, Chris Liao, Catty Zhang Contribution: Physical Model Making, Image making, Design Development Project Statement: Locating at the end of one of the most commercial streets amoung United States, the COCA expansion is designed to fullfil three major demands. The first is to keep encouraging and supporting creative art in St. louis and surround areas. The second is to create more space for holding classes and activities of Washington Universityâ&amp;#x20AC;&amp;#x2122;s performing art program. The third is to expand the original commercial street to satisfy the growing demand due to the new built student residents. In order to accomplish the idea, a main theatre is proposed to complement with Eric Mendelsohnâ&amp;#x20AC;&amp;#x2122;s original building. Along with gallary and commercial space on the street level, COCA expansion intend to become a new land mark to appeal students, local residents and visitors.

Axi:Ome Summer 2015 Mentor: Sung Ho Kim Team with: Ran Gu, Collen Qiu, Boris Tchatalbachev, Enzo Zhang, Tianyi Zhang, Xiaoyuan Zhang Contribution: Physical Model Making, Image making, Design Development Project Statement: Kaliningrad City is emblematic of the complex histories between eastern and western Europe. A Russian exclave, the project situates between Poland and Lithuania with a Prussian history that dates back to the Northern Crusades. The city was largely reconstructed following WWII and renamed Kaliningrad, formerly known as KĂśnigsberg under German rule. Our site is located in the historic core of Korolevskaya Gora, Kingâ&amp;#x20AC;&amp;#x2122;s Mountain, a location chosen for its proximity to two rivers and heightened ground contours giving a visual overview of surrounding territories. For this design competition, Crystal Armature pays homage to historic structures on site while reinventing their composition as an icon of memory. We embrace the idea of fluid histories that are part of a systemic order and understood in relation to generations of cultural influences shaping the spatial reading of the historic center of Kaliningrad. More specific to the proposed design, the project creates an armature derived from the original castle(s), which is then clad in clear and translucent materials of core geometries. In the architecture there is a play between solidity and lightness as components of the castle frame relationships with the House of the Soviets and the surrounding city. 13

Panorama from the Korolevskaya Gora

Panorama from the Korolevskaya Gora

Panorama over the upper city

Columbia University, GSAPP, MSAUD, Fall 2016 Professor: Lee Altman Team with: Daiyue Lyu, Haochen Yang, Liwen Zhao Project Statement: The city of Poughkeepsie is in a process of revitalization in recent decades. As the city has considerable convenience in transportation and locates in the Hudson-River Valley region which is rich in scenic and artistic tourist attractions, it possesses huge potential to be developed as an art tourism destination. In fact, many art projects have already been started by local organizations and artists in and around the city. We want to take the advantage of these potentials to benefit local communities, especially the local youth generation who are suffering from high drop-out rate, high crime rate and low employment rate today. A central art district consisted of Catherine Street Community Center, the Family Partnership Center, the Art Centro and the new Underwear Factory as well as the renovated Trolly Barn along with a series of art destinations rooted in the community is proposed and will provide a variety of different participatory art and cycling activities for the local as well as the tourists. These activities will both happen inside these newly designed or renovated architectures and expand outside to surrounding streets and open fields that are designed to be theme plazas, parks and playgrounds.

Get a Poughkeepsie City Bike from a bike station

Get off a train

Ride in the bicycle playground&amp; make artworks with kids and artists

Participate an art workshop &amp; make some artwork of your own

Join an outdoor art class on the Hudson Walkway

Get some bicycle supplies in a bike repair shop

Buy some special souvenirs in an art souvenir shop

EMPIRE The Dragonhead Being charged of racketeering ranging from gun traﬃcking to murder, Raymond “Shrimp Boy” Chow’s ongoing saga is nearing its end

Iowa State University College of design, Fall 2015 Professor: Mitchell Squire Team with: Sultan Alsamhan, Ran Gu, Tianhui Hou Project Statement: Considering the spatial impact of free-­market capitalism and its reverberations on the built environment, this project questions the possibility of architecture as a medium to challenge the ever-­constricting power relationship between people and money.Therefore we are speculating about a world where wealth is depoliticized as the agency for only a few, or at least decentralized to a point where it can spread to many. At the risk of seeming naïve, our question nonetheless is this: is there a neutral space, a social, political, and economic space, within which all people can have access to the same financial instruments that have led to wealth for a few. Our project seeks to orchestrate a varied complex on a single site in the heart of the city. The desire is to compose a program that combines the shared cultural histories (both high and low) with the most recent trends in economic empowerment in and around the “City by the Bay.” 35

2000 It can be said of the city of San Francisco that the desire for wealth was the foundation on which it was built. The potential for riches led its population of 1,000 in January 1848 to increase to 25,000 in December of the following 37

year. With a population surge built atop dreams of financial wealth, the California Gold Rush of 1848 led to a host of speculations including investment in stocks, property, or other ventures in the hope of gain but with the risk of loss.

IPO STOCK MARKET As mining camps sprang up so did the gambling houses that surrounded them. No sooner than your prospective wealth emerged from the mines, there were instruments in place to entice you with ideas of what to do with it: you could gamble it of course, or you could “invest” in another person’s venture. And if you were proactive you could fulfill your dream by starting a

business of your own. That love of risk and adventure is still evident in San Francisco— albeit in a variety of forms—and one could view gambling culture not only as a part of the foundation upon which the city was initially built but also how it is sustained today.

The building will consist of three primary features: a casino, a stock market, and a startup hub, all for co-Â­working entrepreneurs, activists, creatives, and ambitious professionals taking action to drive positive social, economic and environmental change. We see a parallel that already exists between these three

key forms, not only in matters of risk but also in the physical manifestations of the spaces which house their activities. Thus a dialog will be opened between them, at the meantime, information will be exchanged, flow of currency will be simulated, and existing order will be challenged.

Moments will be created in this building. Several public platforms will be placed on a main circulation through out the three diferent main program. On these platforms, people will expeirence visual connection of pairs of activities and spces, and find the interesting

â&amp;#x20AC;&amp;#x153;RR3 will re-consider the space of the family farm and the way it is farmed, expressed and understood. It is our assertion that the artist, architects and farmers can play a critical role in the production of the seen and un-seen - spaces made and re-made.â&amp;#x20AC;?---Peter P. Goche Long times ago, human beings rely on the law of nature, but with the development of technologies, the ego of human beings are growing and the respect to nature are losing. An installation to explore natural law that hidden behind agriculture, rather than farming techniques which represents more about human activities, was proposed in the corn drying bin. To accomplish the proposal, within the space that filled with human infrastructure as far as I can see, a plain that can hide and introduce itself is built. The plain was made out of fish wire, which possess its special characteristic of transparency and reflectivity. The composition of the plain and density of fish wire are determined by on site observation and research. As a result, an amazing experience was offered to every audience. The journey starts before you walk in the space. When you stand outside and look into the bin, you will be actually looking at the installation but see nothing other than concrete and metal grid. The illusion starts to appear as you cross the threshold into the space. Every movement you make would cause things appear and disappear, glow and vanish. You are interacting with the installation during the whole journey in the bin.

Only within strict limitations is freedom possible. --Igor Stravinsky

â&amp;#x20AC;&amp;#x153;Being Creative is perhaps not the desire to do something, but listening to that which wants to be done, the dictation of the materials.â&amp;#x20AC;? --Anni Albers

“The hallucinatory effect derives from the extrodinary clarity and not from mystery or mist. Nothing is more fantastic ultimately than precision.” ——Robbe-Grillet on Kafka

Project Statement: The Chicago river has a history of breeding the development of the recent industries of central United States, creating one of the greatest post-industrial cities, and at the same time, taking acres of living space of animals. Leaving hundreds of concrete buildings, bridges and highways, most of these human infrastructures as waste ground, the underutilized industrial corridor is obviously both economically and environmentally mismanaged today. The proposal is for a green corridor that will offer a safe space for animalsâ&amp;#x20AC;&amp;#x2122; migrating and revive the deserted old Chicago industrial corridor. Based on different categories of infrastructure, different greening strategies will be applied in order to achieve the most proper planting density. By applying these greening strategies, those waste infrastructures could maximize their function of serving as a migrating corridor for wildlife from suburban without being entirely demolished, which also minimizes the financial costs of the project. At one end of the green corridor, a new high-speed railway station will be built for serving as a transport hub as well as a research center, playing a important role of serving both animals and human.

DEVELOPMENT OF THE GREAT CHICAGO The modern city was incorporated in 1837 by Northern businessmen and grew rapidly from real estate speculation and the realization that it had a commanding position in the emerging inland transportation network, based on lake traffic and railroads, controlling access from the Great Lakes into the Mississippi River basin. Despite a fire in 1871 that destroyed the central business district, the city grew exponentially, becoming the nationâ&amp;#x20AC;&amp;#x2122;s rail center and the dominant Midwestern center for manufacturing, commerce, finance, higher education, religion, broadcasting, sports, jazz, and high culture. (source:wikipedia) Since 1960s, many middle and upper income Americans continued to move from the city for better housing and schools in the suburbs, taking acres of habitat of wildlife. Land-cover 1972

The Chicago Industrial Corridor is currently mismanaged and underutilized due to the decline of traditional heavy industries, which offers a oppotunity to propose a green corridor and let wilds and people be more close.