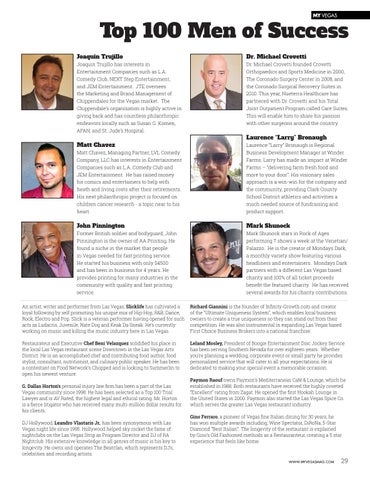 Joaquin Trujillo has interests in Entertainment Companies such as L.A. Comedy Club, NEXT Step Entertainment, and JEM Entertainment. JTE oversees the Marketing and Brand Management of Chippendales for the Vegas market. The Chippendale’s organization is highly active in giving back and has countless philanthropic endeavors locally such as Susan G. Komen, AFAN, and St. Jude’s Hospital.

Dr. Michael Crovetti founded Crovetti Orthopaedics and Sports Medicine in 2000, The Coronado Surgery Center in 2008, and the Coronado Surgical Recovery Suites in 2010. This year, Nueterra Healthcare has partnered with Dr. Crovetti and his Total Joint Outpatient Program called Care Suites. This will enable him to share his passion with other surgeons around the country.

Matt Chavez, Managing Partner, LVL Comedy Company, LLC has interests in Entertainment Companies such as L.A. Comedy Club and JEM Entertainment. He has raised money for comics and entertainers to help with heath and living costs after their retirements. His next philanthropic project is focused on children cancer research - a topic near to his heart.

Laurence “Larry” Bronaugh is Regional Business Development Manager at Winder Farms. Larry has made an impact at Winder Farms – “delivering farm fresh food and more to your door”. His visionary sales approach is a win-win for the company and the community, providing Clark County School District athletics and activities a much needed source of fundraising and product support.

Former British soldier and bodyguard, John Pinnington is the owner of AA Printing. He found a niche in the market that people in Vegas needed for fast printing service. He started his business with only $4500 and has been in business for 4 years. He provides printing for many industries in the community with quality and fast printing service.

Mark Shunock stars in Rock of Ages performing 7 shows a week at the Venetian/ Palazzo. He is the creator of Mondays Dark, a monthly variety show featuring various headliners and entertainers.  Mondays Dark partners with a different Las Vegas based charity and 100% of all ticket proceeds benefit the featured charity.  He has received several awards for his charity contributions.

An artist, writer and performer from Las Vegas, Slicklife has cultivated a loyal following by self promoting his unique mix of Hip-Hop, R&B, Dance, Rock, Electro and Pop. Slick is a veteran performer having opened for such acts as Ludacris, Juvenile, Nate Dog and Keak Da Sneak. He’s currently working on music and killing the music industry here in Las Vegas.

Richard Giannini is the founder of Infinity-Growth.com and creator of the “Ultimate Uniqueness System”, which enables local business owners to create a true uniqueness so they can stand out from their competition. He was also instrumental in expanding Las Vegas based First Choice Business Brokers into a national franchise.

Restaurateur and Executive Chef Beni Velazquez solidified his place in the local Las Vegas restaurant scene Downtown in the Las Vegas Arts District. He is an accomplished chef and contributing food author, food stylist, consultant, nutritionist, and culinary public speaker. He has been a contestant on Food Network’s Chopped and is looking to Summerlin to open his newest venture.

Leland Mosley, President of Boogie Entertainment Disc Jockey Service has been serving Southern Nevada for over eighteen years. Whether you’re planning a wedding, corporate event or small party he provides personalized service that will cater to all your expectations. He is dedicated to making your special event a memorable occasion.

G. Dallas Horton’s personal injury law firm has been a part of the Las Vegas community since 1998. He has been selected as a Top 100 Trial Lawyer and is AV Rated, the highest legal and ethical rating. Mr. Horton is a fierce litigator who has received many multi-million dollar results for his clients. DJ Hollywood, Leandro Vlastaris Jr., has been synonymous with Las Vegas night life since 1995. Hollywood helped sky rocket the fame of nightclubs on the Las Vegas Strip as Program Director and DJ of RA Nightclub. His extensive knowledge in all genres of music is his key to longevity. He owns and operates The Beatclan, which represents DJ’s, celebrities and recording artists.

Paymon Raouf owns Paymon’s Mediterranean Café & Lounge, which he established in 1988. Both restaurants have received the highly coveted “Excellent” rating from Zagat. He opened the first Hookah Lounge in the United States in 2000. Paymon also started the Las Vegas Spice Co. which serves the greater Las Vegas restaurant industry. Gino Ferraro, a pioneer of Vegas fine Italian dining for 30 years, he has won multiple awards including; Wine Spectator, DiRoNa, 5-Star Diamond “Best Italian”. The longevity of the restaurant is explained by Gino’s Old Fashioned methods as a Restauranteur, creating a 5 star experience that feels like home.