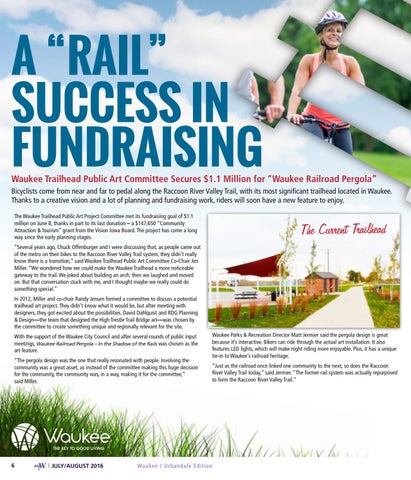 A “RAIL” SUCCESS IN FUNDRAISING

Waukee Trailhead Public Art Committee Secures $1.1 Million for “Waukee Railroad Pergola” Bicyclists come from near and far to pedal along the Raccoon River Valley Trail, with its most significant trailhead located in Waukee. Thanks to a creative vision and a lot of planning and fundraising work, riders will soon have a new feature to enjoy. The Waukee Trailhead Public Art Project Committee met its fundraising goal of $1.1 million on June 8, thanks in part to its last donation – a $147,650 “Community Attraction &amp; Tourism” grant from the Vision Iowa Board. The project has come a long way since the early planning stages.

“Several years ago, Chuck Offenburger and I were discussing that, as people came out of the metro on their bikes to the Raccoon River Valley Trail system, they didn’t really know there is a transition,” said Waukee Trailhead Public Art Committee Co-Chair Jim Miller. “We wondered how we could make the Waukee Trailhead a more noticeable gateway to the trail. We joked about building an arch; then we laughed and moved on. But that conversation stuck with me, and I thought maybe we really could do something special.” In 2012, Miller and co-chair Randy Jensen formed a committee to discuss a potential trailhead art project. They didn’t know what it would be, but after meeting with designers, they got excited about the possibilities. David Dahlquist and RDG Planning &amp; Design—the team that designed the High Trestle Trail Bridge art—was chosen by the committee to create something unique and regionally relevant for the site. With the support of the Waukee City Council and after several rounds of public input meetings, Waukee Railroad Pergola – In the Shadow of the Rails was chosen as the art feature. “The pergola design was the one that really resonated with people. Involving the community was a great asset, as instead of the committee making this huge decision for the community, the community was, in a way, making it for the committee,” said Miller.

Waukee Parks &amp; Recreation Director Matt Jermier said the pergola design is great because it’s interactive. Bikers can ride through the actual art installation. It also features LED lights, which will make night riding more enjoyable. Plus, it has a unique tie-in to Waukee’s railroad heritage. “Just as the railroad once linked one community to the next, so does the Raccoon River Valley Trail today,” said Jermier. “The former rail system was actually repurposed to form the Raccoon River Valley Trail.”

You don't need to book a trip to Napa Valley to experience Wine Country. In Fact, there are plenty of wineries right here in Iowa! We give you a personal tour with a local wine expert as your guide. Also featured is a fine dining guide as well as new Faces of Waukee, a new Featured Teacher, and more! 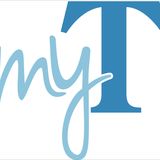