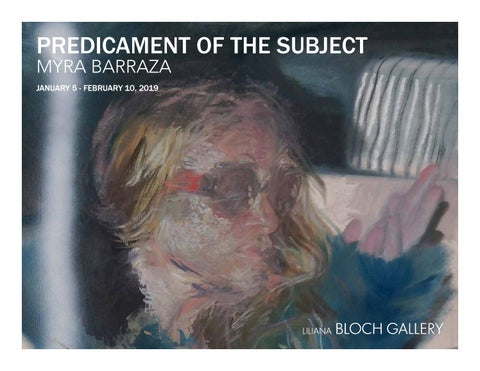 PREDICAMENT OF THE SUBJECT ABOUT THE EXHIBITION

Predicament of the Subject is the title of Myra Barraza’s new solo exhibition at Liliana Bloch Gallery. The title Predicament of the Subject stems from Aristotle’s recognition of ten predicaments, or attributes that sum the range of human thought, in which one, or other, could find a category for any, and all concepts. Myra Barraza has created a series of small -scale social media paintings of men’s portraits of portraits referencing identity fluctuation. The exhibition also includes pieces from her Feral Female series, in which the artist paints what she calls “female sexuality portraits”. Barraza’s portraits constitute a sensual exploration of the frontier of female and male representation.

To establish contact with Mayra Barraza’s work is to enter—not just see—into a kaleidoscope. Her paintings are a moving tapestry, a scenario of thought, parody, and emotion. The grip of textures, colors, technique, and craft become vibrating streams on a canvas. In short, they are electricity not just amber. Let us explain better what we mean. Ancient Greeks noticed the electrical properties that amber produced when rubbed against other objects. Therefore, the etymology of the word electricity comes from the Greek éλεκτρον (élektron), which means amber. By mentioning this amber/electricity connection, we are thinking of Ernst Bloch who in The Principle of Hope (1954) used this analogy to set free Thomas More’s notion of utopia, underlining that “utopia” is not just a term, but also a moving concept; it flows and transforms spatially and temporally. The fossilized resin—amber—is opposed by the dynamic phenomenon—electricity. Mayra’s work is a flow that challenges fossilized thinking. If we place Mayra’s work into this semantic field— kaleidoscope, movement, electricity, and flow—we

find that its source is a never-ending subversion, for she has explored and disputed the structures of power and hierarchy. For example, the dissection of masculinity related to official art history emerged in a previous series named Waters of Lethe (2010-2012). In Greek mythology, Lethe, the daughter of Strife, is the name for both the personification of oblivion and the river named for her. The starting point of this series is Allen Ginsberg’s well-known poem, “A Supermarket in California” (1955). Through a dialogue with Walt Whitman, the poem questions the moral choice of the U.S.A.: Will it be a place of material abundance, but empty values and alienated individuals, or will it recognize and embrace a real human society? “Where are we going, Walt Whitman? The doors close in an hour. Which way does your beard point tonight?” At the end of the poem, the black waters of Lethe are mentioned. Mayra adapts these ideas—the myth and the poem—and examines art history and its market, its values, in order to rethink the artistic canon from a Latin American woman’s perspective. Portraits of men appear blurred, almost erased, as if they were echoes. It makes one wonder: What would happen if “First World” male artists, who have dominated the art scene and market, were condemned to oblivion as many women or racialized artists have? The idea evolves in Predicament of the Subject

(2017). The title stems from Aristotle’s recognition of ten predicaments, which are all explained in his work entitled Categories. These predicaments are as follows: substance, quantity (or magnitude), quality, relation, where (or place), when (or time), being-in-aposition, having (or state), doing (or action), and being affected. According to the ancient Greek philosopher, substance is the fundamental predicament—the substratum—and together they all represent forms of being from an ontological point of view. Words and clauses gather the different ways to be and, in this logic, language resumes reality; it is the adequate expression of intellect. If I say, “Socrates runs,” it means that a substance named Socrates is doing something: running. This is how judgment is outlined, according to Aristotle, and it will be true or false depending on the link or separation between intelligence and reality. Nevertheless, as deconstruction proposals explained in the mid-1960s, language also falls into the structures of power and hierarchy. Deconstructionists say that there is not a real center of reference, a “true origin” of the being; therefore, dichotomies such as logospathos, culture-nature, essence-appearance, presenceabsence, men-women, must be questioned. Moreover, language is actually a structure of references; one term remits to another term, a text to another text. Writers and artists create series of meanings from the

intertextual background of language. We are thus left with footprints of footprints. With Aristotle in mind, the small-scale paintings of men, or rather portraits of portraits of men, which are included in Predicament of the Subject, are an attractive proposal. Mayra came across the original photographs randomly while doing searches on Instagram and the Internet. But her paintings are not duplicating these photographs; they are just the starting points of a dialogue between image and paint. There is, however, one portrait that has an artistic background: A Polaroid photograph of David Hockney taken by Andy Warhol. Yet, the expression of this recreated (somewhat anguished) subject has been altered, it is different from the joyful original one and, thus, it references identity fluctuation. In the other paintings, men are portrayed and re-categorized through the predicaments accompanying the “substance”: actions, relations, affected, positioned. Mayra has created a playful parody of fixed ideas, the unambiguous, the normative, that hung-over, vicious image of identity as something monolithic. The series Feral Female (2017) is also on the line of subversion, but from another perspective. According to the Oxford dictionary, feral describes mainly an animal in wild condition, especially after escape from

captivity or domestication. In this series, women appear nude or seminude in unconcerned positions that radiate ease, assurance, and conviction. From a normative viewpoint, they might seem provocative or, for the more conservative, even pornographic. But they are actually women who are pretty comfortable with their sexuality, with themselves. The key word from the Oxford definition is “escape,” since it could be inferred that these women where not born with this confidence: they were once in captivity or domesticated. We can assume that they have built that ease and conviction for themselves although not without ache. But what did they escape from? As we read the news, we learn that all over the world hundreds of women are being murdered by men “motivated by hatred, contempt, pleasure, or a sense of woman ownership.” In other words, because of their gender, independence or sexuality, they are not tolerated. Most of the time they are killed after being mutilated and sexually abused. Diana Russell and Jane Caputi addressed the situation and introduced the term “femicide” (see their essay “Femicide: Speaking the Unspeakable”, 1990). In 1994, the Mexican scholar Marcela Lagarde translated the word into Spanish as feminicidio because she adds a meaning to it: she calls it a state crime since this violence is marked by impunity in Latin America. For Lagarde, the situation reflects a

fractured and ineffective rule of law. Rita Segato has also underlined this problem in her book La guerra contra las mujeres [The War Against Women] (2017). Nevertheless, the subjectivities represented in Feral Female resist captivity, a term that exceeds the 19th century idea of the feminine space, the “stove” or the boudoir. This captivity also refers to a type of violence of big dimensions—structural, symbolic—lived every day by girls and women, a violence that has been represented powerfully in Mayra’s earlier works, as in the series The Republic of Death (2006-2009). Resistance is incarnated in the body of these feral females. They represent a very-much-needed cartography of pleasure because it reminds us that women’s sexuality and bodies still want to be controlled—and punished. As we step into Mayra’s kaleidoscope we are touched by a sense of strength, absurdity and fragility. These are not just paintings. They are a moving, electrical poem. It is a discharge that outlines reality through imaginary spaces of symbolic resolution.

MYRA BARRAZA ABOUT THE ARTIST

Myra Barraza (El Salvador, 1966) has built a steadfast career after initial studies for the Bachelor in Arts at The Corcoran School of Art in Washington D.C. in 1989-1990. Winner of the Drawing Award from the Museum of Latin American Art of Long Beach, California (2008); the First Prize at the Santo Domingo Drawing Salon in Dominican Republic (2007); and the 2009 Ibero-American Print Biennial of Cáceres, Spain, among other recognitions; Barraza has made important contributions to artistic discourse and has become one of the leading artists in the region investigating issues of contemporary life such as gender identity, memory, and nature vs culture dichotomies. In 2016 she was Guest Visitor of the Federal Republic of Germany to Berlin Art Week, and recipient of a Travel Grant in 2015 by the Patricia Phelps Cisneros Foundation to attend the CIRMA Forum in Tokyo. In Spain, she was selected for the XXXI Pontevedra Biennial: “Utropicos” curated by Santiago Olmo in 2010, and for “Meso-America: Oscilations and Artifices” at the Atlantic Center for Modern Art in Las Palmas Gran Canarias in 2002, as well as awarded an Artists Residence at the Fundación Valparaíso in Almería. Between 2006 and 2010 she developed a body of work under the title “Republic of Death”, that was exhibited at the Spanish Cultural Centers in El Salvador, Honduras and Guatemala. Barraza has actively created and engaged with community projects such as the art and literature E-Magazine El ojo de Adrián of which she was Founding Member and Editor between 2009 and 2012; and Y.ES Contemporary Art for El Salvador, of which she is Council Member since 2015. Over the last 25 years,

she has exhibited her work at the Museo del Barrio in New York, the Instituto de Cultura Puertorriqueña in Puerto Rico, the Museum of Modern Art in Guatemala and the II Biennial of Lima, Peru. In 2013 her work was shown as part of ”Mixtape”, curated by Selene Preciado at MoLAA, and of “Nine Women in the Arts” at the National Chiang Kai-Shek Cultural Center in South Korea. Myra Barraza lives and works in London, England.

The Animal that Therefore I Am Liliana Bloch Gallery

And They Papered the Walls Liliana Bloch Gallery 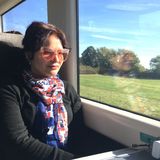