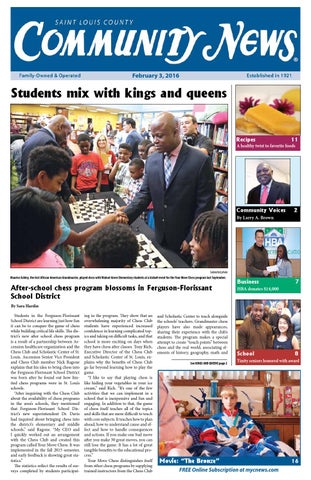 Students mix with kings and queens

A healthy twist to favorite foods

By Larry A. Brown

By Sara Hardin Students in the Ferguson-Florissant School District are learning just how fun it can be to conquer the game of chess while building critical life skills. The district’s new after school chess program is a result of a partnership between Ascension healthcare organization and the Chess Club and Scholastic Center of St. Louis. Ascension Senior Vice President and Chess Club member Nick Ragone explains that his idea to bring chess into the Ferguson-Florissant School District was born after he found out how limited chess programs were in St. Louis schools. “After inquiring with the Chess Club about the availability of chess programs in the area’s schools, they mentioned that Ferguson-Florissant School District’s new superintendent Dr. Davis had inquired about bringing chess into the district’s elementary and middle schools,” said Ragone. “My CEO and I quickly worked out an arrangement with the Chess Club and created this program called Your Move Chess. It was implemented in the fall 2015 semester, and early feedback is showing great statistics.” The statistics reflect the results of surveys completed by students participat-

ing in the program. They show that an overwhelming majority of Chess Club students have experienced increased confidence in learning complicated topics and taking on difficult tasks, and that school is more exciting on days when they have chess after classes. Tony Rich, Executive Director of the Chess Club and Scholastic Center of St. Louis, explains why the benefits of Chess Club go far beyond learning how to play the game. “I like to say that playing chess is like hiding your vegetables in your ice cream,” said Rich. “It’s one of the few activities that we can implement in a school that is inexpensive and fun and engaging. In addition to that, the game of chess itself teaches all of the topics and skills that are more difficult to teach with core subjects. It teaches how to plan ahead, how to understand cause and effect and how to handle consequences and actions. If you make one bad move after you make 30 great moves, you can still lose the game. It has a lot of great tangible benefits to the educational process.” Your Move Chess distinguishes itself from other chess programs by supplying trained instructors from the Chess Club

and Scholastic Center to teach alongside the schools’ teachers. Grandmaster chess players have also made appearances, sharing their experience with the club’s students. The program makes a special attempt to create “touch points” between chess and the real world, associating elements of history, geography, math and See KINGS AND QUEENS page 2 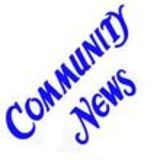