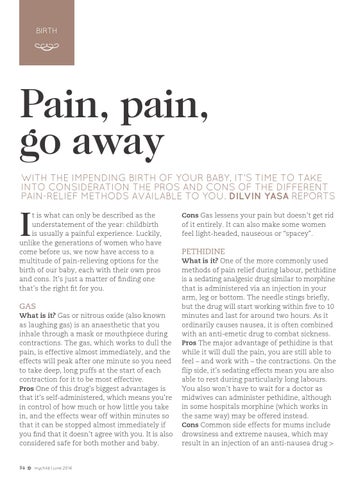 Pain, pain, go away With the impending birth of your baby, it’s time to take into consideration the pros and cons of the different pain-relief methods available to you. Dilvin Yasa reports

t is what can only be described as the understatement of the year: childbirth is usually a painful experience. Luckily, unlike the generations of women who have come before us, we now have access to a multitude of pain-relieving options for the birth of our baby, each with their own pros and cons. It’s just a matter of finding one that’s the right fit for you.

GAS What is it? Gas or nitrous oxide (also known as laughing gas) is an anaesthetic that you inhale through a mask or mouthpiece during contractions. The gas, which works to dull the pain, is effective almost immediately, and the effects will peak after one minute so you need to take deep, long puffs at the start of each contraction for it to be most effective. Pros One of this drug’s biggest advantages is that it’s self-administered, which means you’re in control of how much or how little you take in, and the effects wear off within minutes so that it can be stopped almost immediately if you find that it doesn’t agree with you. It is also considered safe for both mother and baby.

Cons Gas lessens your pain but doesn’t get rid of it entirely. It can also make some women feel light-headed, nauseous or “spacey”.

PETHIDINE What is it? One of the more commonly used methods of pain relief during labour, pethidine is a sedating analgesic drug similar to morphine that is administered via an injection in your arm, leg or bottom. The needle stings briefly, but the drug will start working within five to 10 minutes and last for around two hours. As it ordinarily causes nausea, it is often combined with an anti-emetic drug to combat sickness. Pros The major advantage of pethidine is that while it will dull the pain, you are still able to feel – and work with – the contractions. On the flip side, it’s sedating effects mean you are also able to rest during particularly long labours. You also won’t have to wait for a doctor as midwives can administer pethidine, although in some hospitals morphine (which works in the same way) may be offered instead. Cons Common side effects for mums include drowsiness and extreme nausea, which may result in an injection of an anti-nausea drug &gt;

At My Child Magazine, we pride ourselves on providing a Free Parenting Lifestyle publication to help you on your parenting journey! It's useful advice, without all the fuss. Featuring great articles on all things pregnancy, birth, babies, toddlers, kids, it doesn't stop just there. We also feature amazing inspiring stories, gorgeous product and toy reviews, fabulous fashion for all budgets as well as the latest interiors trends plus so much more. If your a parent and need some help from time to time, make sure you check out My Child Magazine. It's encouraging and relevant parenting advice with a touch of humour! 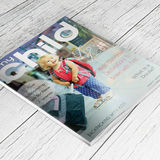