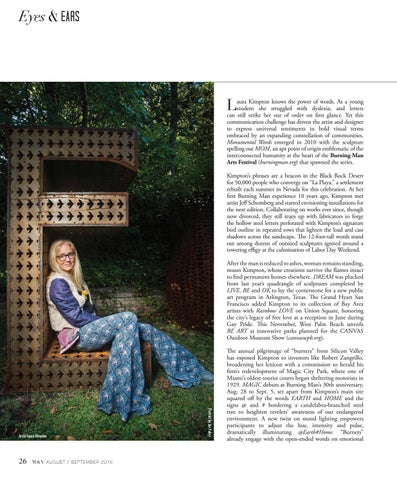 aura Kimpton knows the power of words. As a young student she struggled with dyslexia, and letters can still strike her out of order on first glance. Yet this communication challenge has driven the artist and designer to express universal sentiments in bold visual terms embraced by an expanding constellation of communities. Monumental Words emerged in 2010 with the sculpture spelling out MOM, an apt point of origin emblematic of the interconnected humanity at the heart of the Burning Man Arts Festival (burningman.org) that spawned the series. Kimpton’s phrases are a beacon in the Black Rock Desert for 50,000 people who converge on “La Playa,” a settlement rebuilt each summer in Nevada for this celebration. At her first Burning Man experience 10 years ago, Kimpton met artist Jeff Schomberg and started envisioning installations for the next edition. Collaborating on works ever since, though now divorced, they still team up with fabricators to forge the hollow steel letters perforated with Kimpton’s signature bird outline in repeated rows that lighten the load and cast shadows across the sandscape. The 12-foot-tall words stand out among dozens of outsized sculptures ignited around a towering effigy at the culmination of Labor Day Weekend. After the man is reduced to ashes, woman remains standing, muses Kimpton, whose creations survive the flames intact to find permanent homes elsewhere. DREAM was plucked from last year’s quadrangle of sculptures completed by LIVE, BE and OK to lay the cornerstone for a new public art program in Arlington, Texas. The Grand Hyatt San Francisco added Kimpton to its collection of Bay Area artists with Rainbow LOVE on Union Square, honoring the city’s legacy of free love at a reception in June during Gay Pride. This November, West Palm Beach unveils BE ART at innovative parks planned for the CANVAS Outdoor Museum Show (canvaswpb.org).

The annual pilgrimage of “burners” from Silicon Valley has exposed Kimpton to investors like Robert Zangrillo, broadening her lexicon with a commission to herald his firm’s redevelopment of Magic City Park, where one of Miami’s oldest tourist courts began sheltering motorists in 1929. MAGIC debuts at Burning Man’s 30th anniversary, Aug. 28 to Sept. 5, set apart from Kimpton’s main site squared off by the words EARTH and HOME and the signs @ and # bordering a candelabra-branched steel tree to heighten revelers’ awareness of our endangered environment. A new twist on mood lighting empowers participants to adjust the hue, intensity and pulse, dramatically illuminating @Earth#Home. “Burners” already engage with the open-ended words on emotional 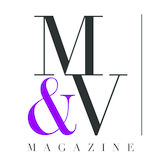