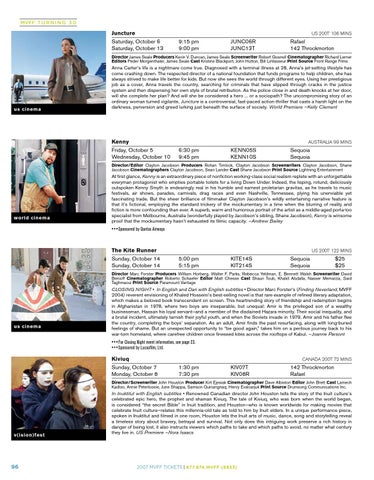 Anna Carter’s life is a nightmare come true. Diagnosed with a terminal illness at 28, Anna’s jet-setting lifestyle has come crashing down. The respected director of a national foundation that funds programs to help children, she has always strived to make life better for kids. But now she sees the world through different eyes. Using her prestigious job as a cover, Anna travels the country, searching for criminals that have slipped through cracks in the justice system and then dispensing her own style of brutal retribution. As the police close in and death knocks at her door, will she complete her plan? And will she be considered a hero ... or a sociopath? The uncompromising story of an ordinary woman turned vigilante, Juncture is a controversial, fast-paced action-thriller that casts a harsh light on the darkness, perversion and greed lurking just beneath the surface of society. World Premiere —Kelly Clement

At first glance, Kenny is an extraordinary piece of nonfiction working-class social realism replete with an unforgettable everyman protagonist who empties portable toilets for a living Down Under. Indeed, the lisping, rotund, deliciously outspoken Kenny Smyth is endearingly real in his humble and earnest proletarian gravitas, as he travels to music festivals, air shows, parades, carnivals, drag races and even Nashville, Tennessee, plying his unenviable yet fascinating trade. But the sheer brilliance of filmmaker Clayton Jacobson’s wildly entertaining narrative feature is that it’s fictional, employing the standard trickery of the mockumentary in a time when the blurring of reality and fiction is more confounding than ever. A superb, warm and humorous portrait of the artist as a middle-aged porta-loo specialist from Melbourne, Australia (wonderfully played by Jacobson’s sibling, Shane Jacobson), Kenny is winsome proof that the mockumentary hasn’t exhausted its filmic capacity. —Andrew Bailey • • • Sponsored by Qantas Airways

CLOSING NIGHT • In English and Dari with English subtitles • Director Marc Forster’s (Finding Neverland, MVFF 2004) reverent envisioning of Khaled Hosseini’s best-selling novel is that rare example of refined literary adaptation, which makes a beloved book transcendent on screen. This heartrending story of friendship and redemption begins in Afghanistan in 1978, where two boys are inseparable, but unequal: Amir is the privileged son of a wealthy businessman, Hassan his loyal servant—and a member of the disdained Hazara minority. Their social inequality, and a brutal incident, ultimately tarnish their joyful youth, and when the Soviets invade in 1979, Amir and his father flee the country, completing the boys’ separation. As an adult, Amir finds the past resurfacing, along with long-buried feelings of shame. But an unexpected opportunity to “be good again,” takes him on a perilous journey back to his war-torn homeland, where carefree children once finessed kites across the rooftops of Kabul. —Joanne Parsont • • • For Closing Night event information, see page 23. • • • Sponsored by Lucasfilm, Ltd.

In Inuktitut with English subtitles • Renowned Canadian director John Houston tells the story of the Inuit culture’s celebrated epic hero, the prophet and shaman Kiviuq. The tale of Kiviuq, who was born when the world began, is considered “the secret Bible” in Inuit tradition, and Houston—who is known worldwide for making movies that celebrate Inuit culture—relates this millennia-old tale as told to him by Inuit elders. In a unique performance piece, spoken in Inuktitut and filmed in one room, Houston lets the Inuit arts of music, dance, song and storytelling reveal a timeless story about bravery, betrayal and survival. Not only does this intriguing work preserve a rich history in danger of being lost, it also instructs viewers which paths to take and which paths to avoid, no matter what century they live in. US Premiere —Nora Isaacs 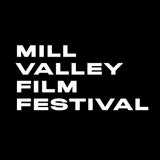