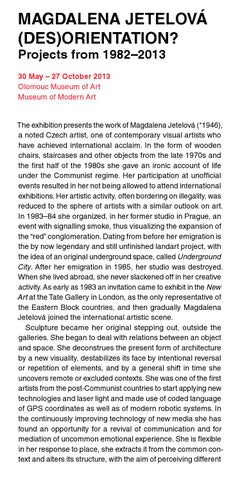 The exhibition presents the work of Magdalena Jetelová (*1946), a noted Czech artist, one of contemporary visual artists who have achieved international acclaim. In the form of wooden chairs, staircases and other objects from the late 1970s and the first half of the 1980s she gave an ironic account of life under the Communist regime. Her participation at unofficial events resulted in her not being allowed to attend international exhibitions. Her artistic activity, often bordering on illegality, was reduced to the sphere of artists with a similar outlook on art. InVlastivědné 1983–84 she organized, in her former studio in Prague, an muzeum event with signalling smoke, thus visualizing the expansion of Museum the “red” conglomeration. Dating from before her emigration is of Modern Art the by now legendary and still unfinished landart project, with the ideaOlomouc of an original underground space, called Underground Archdiocesan Museum City. After her emigration in 1985, her studio was destroyed. When she lived abroad, she never slackened off in her creative Regional Museum activity. of AsOlomouc early as 1983 an invitation came to exhibit in the New Art at the Tate Gallery in London, as the only representative of the Eastern Block countries, and then gradually Magdalena Regional Museum Jetelová joined the international artistic scene. in Olomouc Sculpture became her original stepping out, outside the galleries. She began to deal with relations between an object and space. She deconstrues the present form of architecture by a new visuality, destabilizes its face by intentional reversal or repetition of elements, and by a general shift in time she uncovers remote or excluded contexts. She was one of the first artists from the post-Communist countries to start applying new technologies and laser light and made use of coded language of GPS coordinates as well as of modern robotic systems. In the continuously improving technology of new media she has found an opportunity for a revival of communication and for mediation of uncommon emotional experience. She is flexible in her response to place, she extracts it from the common context and alters its structure, with the aim of perceiving different

Magdalena Jetelová | (DES)ORIENTATION? Projects from 1982–2013 May 30 — October 27, 2013 Museum of Modern Art | Nave, Salon The world famous Czech artist and author of conceptual projects Magdalena Jetelová (b. 1946) has created elaborate spatial installations for many prestigious museums and galleries in Europe, the United States or Japan. The Olomouc exhibition shows her projects arising from her direct interest in architecture and a particular place in close relation to human presence. It will also provide a retrospective overview of the artist’s previous work through video documentation as well as her latest works with smoke and its analysis as a symbol in the post-totalitarian state that the artist has been developing in her work since the 1980s. This, only the third individual presentation of Magdalena Jetelová in the Czech Republic, was prepared in the interaction with particular locations in the historically rich building of the Museum of Modern Art. 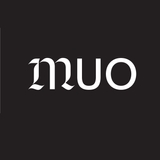