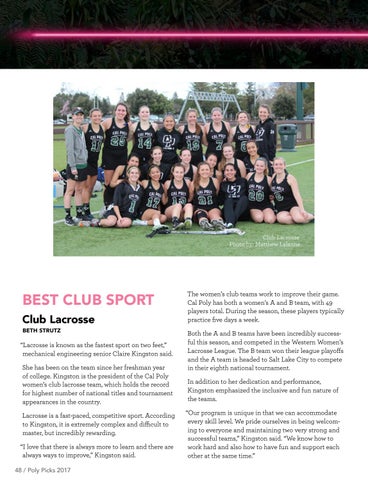 “Lacrosse is known as the fastest sport on two feet,” mechanical engineering senior Claire Kingston said. She has been on the team since her freshman year of college. Kingston is the president of the Cal Poly women’s club lacrosse team, which holds the record for highest number of national titles and tournament appearances in the country. Lacrosse is a fast-paced, competitive sport. According to Kingston, it is extremely complex and difficult to master, but incredibly rewarding. “I love that there is always more to learn and there are always ways to improve,” Kingston said. 48 / Poly Picks 2017

The women’s club teams work to improve their game. Cal Poly has both a women’s A and B team, with 49 players total. During the season, these players typically practice five days a week. Both the A and B teams have been incredibly successful this season, and competed in the Western Women’s Lacrosse League. The B team won their league playoffs and the A team is headed to Salt Lake City to compete in their eighth national tournament. In addition to her dedication and performance, Kingston emphasized the inclusive and fun nature of the teams. “Our program is unique in that we can accommodate every skill level. We pride ourselves in being welcoming to everyone and maintaining two very strong and successful teams,” Kingston said. “We know how to work hard and also how to have fun and support each other at the same time.” 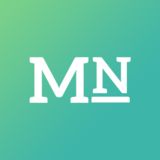