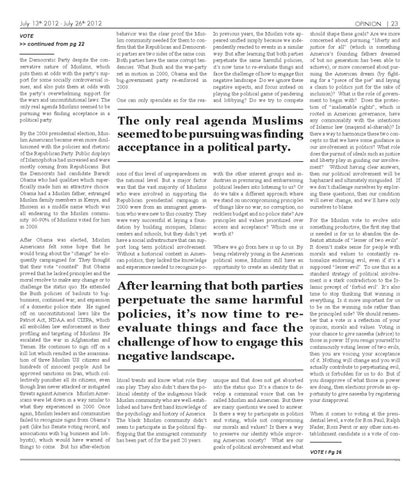 the Democratic Party despite the conservative nature of Muslims, which puts them at odds with the party’s support for some socially controversial issues, and also puts them at odds with the party’s overwhelming support for the wars and unconstitutional laws. The only real agenda Muslims seemed to be pursuing was finding acceptance in a political party. By the 2008 presidential election, Muslim Americans became even more disillusioned with the policies and rhetoric of the Republican Party. Public displays of Islamophobia had increased and were mostly coming from Republicans. But the Democrats had candidate Barack Obama who had qualities which superficially made him an attractive choice. Obama had a Muslim father, estranged Muslim family members in Kenya, and Hussein as a middle name which was all endearing to the Muslim community. 80-90% of Muslims voted for him in 2008. After Obama was elected, Muslim Americans felt some hope that he would bring about the “change” he eloquently campaigned for. They thought that their vote “counted”. But Obama proved that he lacked principles and the moral resolve to make any change or to challenge the status quo. He extended the Bush policies of bailouts to bigbusiness, continued war, and expansion of a domestic police state. He signed off on unconstitutional laws like the Patriot Act, NDAA and CISPA, which all embolden law enforcement in their profiling and targeting of Muslims. He escalated the war in Afghanistan and Yemen. He continues to sign off on a kill list which resulted in the assassination of three Muslim US citizens and hundreds of innocent people. And he approved sanctions on Iran, which collectively punishes all its citizens, even though Iran never attacked or instigated threats against America. Muslim Americans were let down in a way similar to what they experienced in 2000. Once again, Muslim leaders and communities failed to recognize signs from Obama’s past (like his Senate voting record, and associations with big business and lobbyists), which would have warned of things to come. But his after-election

OPINION | 23 behavior was the clear proof the Muslim community needed for them to confirm that the Republican and Democratic parties are two sides of the same coin. Both parties have the same corrupt tendencies. What Bush and the war-party set in motion in 2000, Obama and the big-government party re-enforced in 2008. One can only speculate as for the rea-

In previous years, the Muslim vote appeared unified simply because we independently reacted to events in a similar way. But after learning that both parties perpetuate the same harmful policies, it’s now time to re-evaluate things and face the challenge of how to engage this negative landscape. Do we ignore these negative aspects, and focus instead on playing the political game of pandering and lobbying? Do we try to compete

The only real agenda Muslims seemed to be pursuing was finding acceptance in a political party. sons of this level of unpreparedness on the national level. But a major factor was that the vast majority of Muslims who were involved in supporting the Republican presidential campaign in 2000 were from an immigrant generation who were new to this country. They were very successful at laying a foundation by building mosques, Islamic centers and schools, but they didn’t yet have a social infrastructure that can support long term political involvement. Without a historical context in American politics, they lacked the knowledge and experience needed to recognize po-

with the other interest groups and industries in pressuring and embarrassing political leaders into listening to us? Or do we take a different approach where we stand on uncompromising principles of things like no war, no corruption, no reckless budget and no police state? Are principles and values prioritized over access and acceptance? Which one is worth it? Where we go from here is up to us. By being relatively young in the American political scene, Muslims still have an opportunity to create an identity that is

After learning that both parties perpetuate the same harmful policies, it’s now time to reevaluate things and face the challenge of how to engage this negative landscape. litical trends and know what role they can play. They also didn’t share the political identity of the indigenous black Muslim community who are well-established and have first hand knowledge of the psychology and history of America. The black Muslim community didn’t seem to participate in the political flipflopping that the immigrant community has been part of for the past 20 years.

unique and that does not get absorbed into the status quo. It’s a chance to develop a communal voice that can be called Muslim and American. But there are many questions we need to answer. Is there a way to participate in politics and voting, while not compromising our morals and values? Is there a way to preserve our identity while improving American society? What are our goals of political involvement and what

should shape these goals? Are we more concerned about pursuing “liberty and justice for all” (which is something America’s founding fathers dreamed of but no generation has been able to achieve), or more concerned about pursuing the American dream (by fighting for a “piece of the pie” and laying a claim to politics just for the sake of inclusion)? What is the role of government to begin with? Does the protection of “inalienable rights”, which is rooted in American governance, have any commonality with the intentions of Islamic law (maqasid al-shariah)? Is there a way to harmonize these two concepts so that we have some guidance in our involvement in politics? What role does the pursuit of ideals such as justice and liberty play in guiding our involvement? Without having clear answers, then our political involvement will be haphazard and ultimately misguided. If we don’t challenge ourselves by exploring these questions, then our condition will never change, and we’ll have only ourselves to blame. For the Muslim vote to evolve into something productive, the first step that is needed is for us to abandon the defeatist attitude of “lesser of two evils”. It doesn’t make sense for people with morals and values to constantly rationalize endorsing evil, even if it’s a supposed “lesser evil”. To use this as a standard strategy of political involvement is a stark contradiction to the Islamic precept of ‘forbid evil’. It’s also time to stop thinking that winning is everything. Is it more important for us to be on the winning side rather than the principled side? We should remember that a vote is a reflection of your opinion, morals and values. Voting is your chance to give naseeha (advice) to those in power. If you resign yourself to continuously voting lesser of two evils, then you are voicing your acceptance of it. Nothing will change and you will actually contribute to perpetuating evil, which is forbidden for us to do. But if you disapprove of what those in power are doing, then elections provide an opportunity to give naseeha by registering your disapproval. When it comes to voting at the presidential level, a vote for Ron Paul, Ralph Nader, Ross Perot or any other non-establishment candidate is a vote of convote I Pg 26 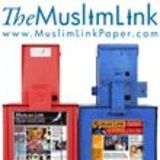