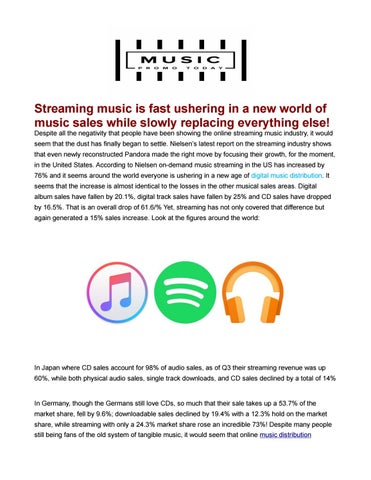 Streaming music is fast ushering in a new world of music sales while slowly replacing everything else! Despite all the negativity that people have been showing the online streaming music industry, it would seem that the dust has finally began to settle. Nielsenâ&#x20AC;&#x2122;s latest report on the streaming industry shows that even newly reconstructed Pandora made the right move by focusing their growth, for the moment, in the United States. According to Nielsen on-demand music streaming in the US has increased by 76% and it seems around the world everyone is ushering in a new age of digital music distribution. It seems that the increase is almost identical to the losses in the other musical sales areas. Digital album sales have fallen by 20.1%, digital track sales have fallen by 25% and CD sales have dropped by 16.5%. That is an overall drop of 61.6/% Yet, streaming has not only covered that difference but again generated a 15% sales increase. Look at the figures around the world:

In Japan where CD sales account for 98% of audio sales, as of Q3 their streaming revenue was up 60%, while both physical audio sales, single track downloads, and CD sales declined by a total of 14%

In Germany, though the Germans still love CDs, so much that their sale takes up a 53.7% of the market share, fell by 9.6%; downloadable sales declined by 19.4% with a 12.3% hold on the market share, while streaming with only a 24.3% market share rose an incredible 73%! Despite many people still being fans of the old system of tangible music, it would seem that online music distribution

services are indeed taking over. Which begs the question of how artists are going to begin negotiating their terms with companies like Spotify, Apple Music, and Soundcloud, to name a few

Again in France, revenues earned from audio streaming increased by 55%, and though there doesn’t seem to have had any real declines in the physical music sales, SNEP, the French recorded music trade group, is waiting until February 28th to reveal the details of how France’s industry has been affected. If the other countries are any indication, it would see that digital distribution services are certainly taking hold of the industry.

Finally for the same of our statistics, Spain premium streaming revenue services has risen by 37.4% to €62 million, advertising-supported streaming rose 24% to €25 million euros, and vinyl LP

increased by 19.6%. According to Billboard, their total recorded music market has actually increased by 1.7%. It would seem regardless of the digital age, vinyl lovers are always going to be around!

These numbers are all from 5 of the largest music markets in the world. US, Germany and Japan fall within the first 4, depending on the variability of the UK while France is 5th, and Spain is within the top 15 markets. These numbers are still enough to give a good indication of where marketing in the music industry is headed.

For more up to date info, come see us at MusicPromoToday.com, the best music PR company, around! We can answer any and all questions about music you may have, from your own band to global trends.

Summary: Statistics on the increase in digital streaming revenue worldwide compared to physical sales and digital downloads; as a sample population for the general direction that the music industry and sales are going. Statistics on the increase in digital streaming revenue worldwide compared to physical sales and digital downloads; as a sample population f...

Statistics on the increase in digital streaming revenue worldwide compared to physical sales and digital downloads; as a sample population f...