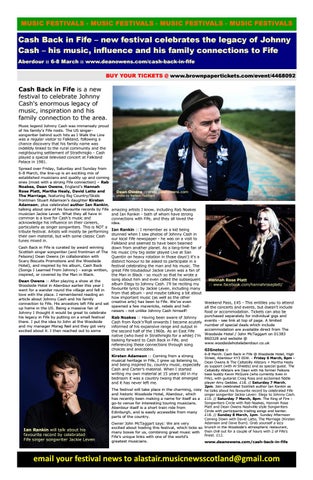 Cash Back in Fife – new festival celebrates the legacy of Johnny Cash – his music, influence and his family connections to Fife Aberdour :: 6-8 March :: www.deanowens.com/cash-back-in-fife BUY YOUR TICKETS @ www.brownpapertickets.com/event/4468092

Cash Back in Fife is a new festival to celebrate Johnny Cash&#39;s enormous legacy of music, inspiration and his family connection to the area. Music legend Johnny Cash was immensely proud of his family&#39;s Fife roots. The US singersongwriter behind such hits as I Walk the Line was a regular visitor to Falkland, following a chance discovery that his family name was indelibly linked to the rural community and the neighbouring settlement of Strathmiglo - Cash played a special televised concert at Falkland Palace in 1981. Spread over Friday, Saturday and Sunday from 6-8 March, the line-up is an exciting mix of established musicians and quality up and coming ones (most with a strong Fife connection) – Rab Noakes, Dean Owens, England’s Hannah Rose Platt, Martha Healy, David Latto and The Marriage, featuring Big Country/Skids frontman Stuart Adamson’s daughter Kirsten Adamson; plus celebrated author Ian Rankin, talking about one of his favourite records by Fife musician Jackie Leven. What they all have in common is a love for Cash’s music and acknowledge his influence on their careers, particularly as singer songwriters. This is NOT a tribute festival. Artists will mostly be performing their own material, but with some classic Cash tunes mixed in.

amazing artists I know, including Rab Noakes and Ian Rankin - both of whom have strong connections with Fife, and they all loved the idea.

Ian Rankin :: I remember as a kid being stunned when I saw photos of Johnny Cash in our local Fife newspaper - he was on a visit to Falkland and seemed to have been beamed Cash Back in Fife is curated by award winning down from another planet. As a long-time fan of Scottish singer songwriter (and frontman of The his music (my big sister played Live at San Felsons) Dean Owens (in collaboration with Quentin on heavy rotation in those days!) it&#39;s a Scary Biscuits Promotions and the Woodside distinct honour to be asked to participate in a Hotel), and inspired by his album, Cash Back festival celebrating the man and his music. The (Songs I Learned From Johnny) - songs written, great Fife troubadour Jackie Leven was a fan of inspired, or covered by the Man in Black. the Man in Black - so much so that he wrote a song about him and even called the subsequent Hannah Rose Platt Dean Owens :: After playing a show at the album Elegy to Johnny Cash. I&#39;ll be reciting my :: www.facebook.com/hannahroseplatt/ Woodside Hotel in Aberdour earlier this year I favourite lyrics by Jackie Leven, including many went for a wander round the village and fell in from that album - and maybe talking a bit about love with the place. I remembered reading an how important music (as well as the other article about Johnny Cash and his family Weekend Pass, £45 - This entitles you to attend connection to Fife. His ancestors left Fife and set creative arts) has been to Fife. We&#39;ve even spawned a few mavericks, rebels and hellall the concerts and events, but doesn’t include up home in the US. Being a massive fan of raisers not unlike Johnny Cash himself! food or accommodation. Tickets can also be Johnny I thought it would be great to celebrate purchased separately for individual gigs and his legacy in Fife by putting on a small festival Rab Noakes :: Having been aware of Johnny there. I put the idea to John at the Woodside Cash from Rock’n’Roll onwards I became acutely events - see link at top of page. A limited number of special deals which include and my manager Morag Neil and they got very informed of his expansive range and output in accommodation are available direct from The excited about it. I then reached out to some the second half of the 1960s. As an East Fife native (who lived in Strathmiglo for a while) I’m Woodside Hotel / John McTaggart on 01383 860328 and website @ looking forward to Cash Back in Fife, and www.woodsidehotelaberdour.co.uk referencing these connections through song choices and anecdotes.

6-8 March. Cash Back in Fife @ Woodside Hotel, High Street, Aberdour KY3 0SW. - Friday 6 March, 8pm Dean Owens &amp; The Celtabilly Allstars + Martha Healy as support (with Al Shields) and as special guest. The Celtabilly Allstars are Dean with his former Felsons bass buddy Kevin McGuire (who currently lives in Fife), with guitarist Craig Ross and acclaimed fiddle player Amy Geddes. £18. // Saturday 7 March, 2pm. Join celebrated Scottish author Ian Rankin as The festival will take place in the charming, cosy he talks about his favourite record by celebrated Fife and historic Woodside Hotel, Aberdour, which singer songwriter Jackie Leven: Elegy to Johnny Cash. has recently been making a name for itself as a £10. // Saturday 7 March, 8pm. The Ring of Fire Songwriters Circle with Rab Noakes, Hannah Rose go-to venue for interesting touring musicians. Platt and Dean Owens Nashville style Songwriters Aberdour itself is a short train ride from Circle with participants trading songs and banter. Edinburgh, and is easily accessible from many £18. // Sunday 8 March, 1pm. Sunday Afternoon parts of the country. Coming Down with David Latto, The Marriage (Kirsten Adamson and Dave Burn). Grab yourself a lazy Owner John McTaggart says: We are very excited about hosting this festival, which ticks so brunch in the Woodside’s atmospheric restaurant, many boxes for us, combining great music with then chill out for a couple of hours with 2 of Fife’s finest. £12. Fife’s unique links with one of the world’s

Kirsten Adamson :: Coming from a strong musical heritage in Fife, I grew up listening to, and being inspired by, country music, especially Cash and Carter’s material. When I started writing my own material at 15 years old in my bedroom it was a country twang that emerged and it has never left me.

email your festival news to alastair.musicnewsscotland@gmail.com

Here's the latest MNS FESTIVALS! supplement from the MUSIC NEWS Scotland team - enjoy:) You can read MUSIC NEWS Scotland, MNS FESTIVALS! and our MNS GIGguide from links at: http://musicnewsscotland.wordpress.com/mns-digital-publication-links/ and why not sign up to get them all delivered straight to your inbox every week here: http://eepurl.com/dKZQY Email your music news to: musicnewsscotland@gmail.com Advertising - If you would like to find out about great advertising deals in MNS then email: carol.musicnewsscotland@gmail.com to find out more and book space. 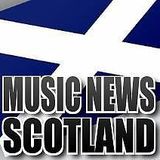