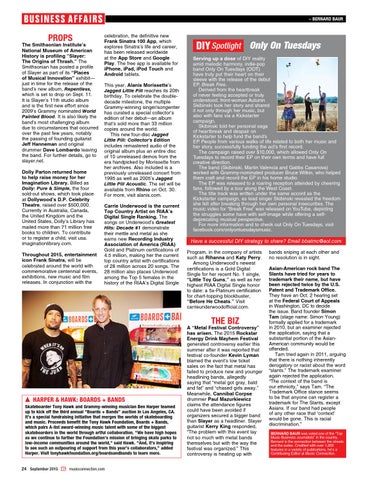 The Smithsonian Institute’s National Museum of American History is profiling “Slayer: The Origins of Thrash.” The Smithsonian has posted a profile of Slayer as part of its “Places of Musical Innovation” exhibit— just in time for the release of the band’s new album, Repentless, which is set to drop on Sept. 11. It is Slayer’s 11th studio album and is the first new effort since 2009’s Grammy nominated World Painted Blood. It is also likely the band’s most challenging album due to circumstances that occurred over the past few years, notably the passing of founding guitarist Jeff Hanneman and original drummer Dave Lombardo leaving the band. For further details, go to slayer.net. Dolly Parton returned home to help raise money for her Imagination Library. Billed as Dolly: Pure &amp; Simple, the four sold-out shows, which took place at Dollywood’s D.P. Celebrity Theatre, raised over $500,000. Currently in Australia, Canada, the United Kingdom and the United States, Dolly’s Library has mailed more than 71 million free books to children. To contribute or to register a child, visit usa. imaginationlibrary.com. Throughout 2015, entertainment icon Frank Sinatra, will be celebrated around the world with commemorative centennial events, exhibitions, new music and film releases. In conjunction with the

celebration, the definitive new Frank Sinatra 100 App, which explores Sinatra’s life and career, has been released worldwide at the App Store and Google Play. The free app is available for iPhone, iPad, iPod Touch and Android tablets. This year, Alanis Morissette’s Jagged Little Pill reaches its 20th birthday. To celebrate the doubledecade milestone, the multiple Grammy-winning singer/songwriter has curated a special collector’s edition of her debut—an album that’s sold more than 33 million copies around the world. This new four-disc Jagged Little Pill: Collector’s Edition includes remastered audio of the original album plus an entire disc of 10 unreleased demos from the era handpicked by Morissette from her archives. Also included is a previously unreleased concert from 1995 as well as 2005’s Jagged Little Pill Acoustic. The set will be available from Rhino on Oct. 30. For more, visit alanis.com. Carrie Underwood is the current Top Country Artist on RIAA’s Digital Single Ranking. The songs on Underwood’s Greatest Hits: Decade #1 demonstrate their mettle and metal as she earns new Recording Industry Association of America (RIAA) Gold and Platinum certifications of 4.5 million, making her the current top country artist with certifications of 28 million across 20 songs. The 28 million also places Underwood among the Top 5 females in the history of the RIAA’s Digital Single

DIY Spotlight Only On Tuesdays Serving up a dose of DIY reality amid melodic harmony, indie-pop band Only On Tuesdays (OOT) have truly put their heart on their sleeve with the release of the debut EP, Break Free. Derived from the heartbreak of never feeling accepted or truly understood, front-woman Autumn Skibinski took her story and shared it not only through her music, but also with fans via a Kickstarter campaign. Skibinski told her personal saga of heartbreak and despair on Kickstarter to help fund the band’s EP. People from various walks of life related to both her music and her story, successfully funding the act’s first record. The campaign raised over $10,000, which allowed Only On Tuesdays to record their EP on their own terms and have full creative direction. The band (Skibinski, Martin Valencia and Gabbs Casanova) worked with Grammy-nominated producer Bruce Witkin, who helped them craft and record the EP in his home studio. The EP was released to a roaring reception attended by cheering fans, followed by a tour along the West Coast. The title track was written under the same accord as the Kickstarter campaign, as lead singer Skibinski revealed the freedom she felt after breaking through her own personal insecurities. The music video for “Break Free” was released on YouTube, depicting the struggles some have with self-image while offering a selfdeprecating musical perspective. For more information and to check out Only On Tuesdays, visit facebook.com/onlyontuesdaysmusic.

Have a successful DIY strategy to share? Email bbatmc@aol.com Program, in the company of artists such as Rihanna and Katy Perry. Among Underwood’s newest certifications is a Gold Digital Single for her recent No. 1 single, “Little Toy Guns,” as well as her highest RIAA Digital Single honor to date: a 5x-Platinum certification for chart-topping blockbuster, “Before He Cheats.” Visit carrieunderwoodofficial.com.

HARPER &amp; HAWK: BOARDS + BANDS Skateboarder Tony Hawk and Grammy-winning musician Ben Harper teamed up to kick off the third annual “Boards + Bands” auction in Los Angeles, CA. It’s a special fundraising initiative that merges the worlds of skateboarding and music. Proceeds benefit the Tony Hawk Foundation, Boards + Bands, which pairs A-list award-winning music talent with some of the biggest skateboarders in the world through artful collaboration. “We have high hopes as we continue to further the Foundation’s mission of bringing skate parks to low-income communities around the world,” said Hawk. “And, it’s inspiring to see such an outpouring of support from this year’s collaborators,” added Harper. Visit tonyhawkfoundation.org/boardsandbands to learn more. 24 September 2015

A “Metal Festival Controversy” has arisen. The 2015 Rockstar Energy Drink Mayhem Festival generated controversy earlier this summer after it was reported that festival co-founder Kevin Lyman blamed the event’s low ticket sales on the fact that metal has failed to produce new and younger headlining bands, allegedly saying that “metal got gray, bald and fat” and “chased girls away.” Meanwhile, Cannibal Corpse drummer Paul Mazurkiewicz claims the attendance figures could have been avoided if organizers secured a bigger band than Slayer as a headliner. Slayer guitarist Kerry King responded, “The problem with this event lay not so much with metal bands themselves but with the way the festival was organized.” This controversy is heating up with

bands sniping at each other and no resolution is in sight. Asian-American rock band The Slants have tried for years to trademark their name, but have been rejected twice by the U.S. Patent and Trademark Office. They have an Oct. 2 hearing set at the Federal Court of Appeals in Washington, DC to decide the issue. Band founder Simon Tam (stage name: Simon Young) formally applied for a trademark in 2010, but an examiner rejected the application, saying that a substantial portion of the AsianAmerican community would be offended. Tam tried again in 2011, arguing that there is nothing inherently derogatory or racist about the word “slants.” The trademark examiner again rejected the application. “The context of the band is our ethnicity,” says Tam. “The Trademark Office stance seems to be that anyone can register a trademark for The Slants, except Asians. If our band had people of any other race that ‘context’ would be gone. This is racial discrimination.” BERNARD BAUR was voted one of the “Top Music Business Journalists” in the country. Bernard is the connection between the streets and the suites. Credited with over 1,200 features in a variety of publications, he’s a Contributing Editor at Music Connection.

Music Connection presents its 2015 film/TV music supervisors and post-production issue featuring pop duo twenty one pilots. Elsewhere in the issue we shed light on how--and how not--to get your music placed, Build Trusted Relationships with Film/TV and a free directory for Music Supervisors and Post-Production!