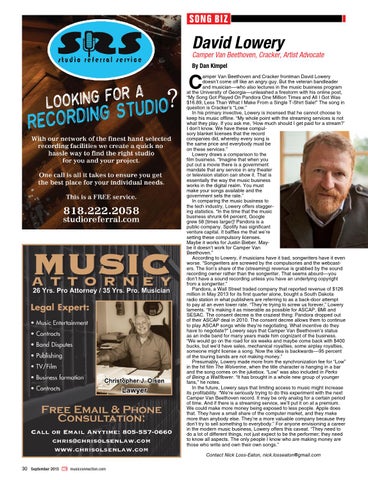 amper Van Beethoven and Cracker frontman David Lowery doesn’t come off like an angry guy. But the veteran bandleader and musician––who also lectures in the music business program at the University of Georgia––unleashed a firestorm with his online post, “My Song Got Played On Pandora One Million Times and All I Got Was $16.89, Less Than What I Make From a Single T-Shirt Sale!” The song in question is Cracker’s “Low.” In his primary invective, Lowery is incensed that he cannot choose to keep his music offline. “My whole point with the streaming services is not what they play. If you ask me, ‘How much should I get paid for a stream?’ I don’t know. We have these compulsory blanket licenses that the record companies did, whereby every song is the same price and everybody must be on these services.” Lowery draws a comparison to the film business. “Imagine that when you put out a movie there is a government mandate that any service in any theater or television station can show it. That is essentially the way the music business works in the digital realm. You must make your songs available and the government sets the rate.” In comparing the music business to the tech industry, Lowery offers staggering statistics. “In the time that the music business shrunk 64 percent, Google grew 58 [times larger]! Pandora is a public company. Spotify has significant venture capital. It baffles me that we’re setting these compulsory licenses. Maybe it works for Justin Bieber. Maybe it doesn’t work for Camper Van Beethoven.” According to Lowery, if musicians have it bad, songwriters have it even worse. “Songwriters are screwed by the compulsories and the webcasters. The lion’s share of the (streaming) revenue is grabbed by the sound recording owner rather than the songwriter. That seems absurd––you don’t have a sound recording unless you have an underlying copyright from a songwriter.” Pandora, a Wall Street traded company that reported revenue of $126 million in May 2013 for its first quarter alone, bought a South Dakota radio station in what publishers are referring to as a back-door attempt to pay at an even lower rate. “They’re trying to screw us forever,” Lowery laments. “It’s making it as miserable as possible for ASCAP, BMI and SESAC. The consent decree is the craziest thing: Pandora dropped out of their ASCAP deal in 2010. The consent decree allows them to continue to play ASCAP songs while they’re negotiating. What incentive do they have to negotiate?” Lowery says that Camper Van Beethoven’s status as an indie band for many years made him cognizant of the business. “We would go on the road for six weeks and maybe come back with $400 bucks, but we’d have sales, mechanical royalties, some airplay royalties, someone might license a song. Now the idea is backwards––95 percent of the touring bands are not making money.” Presumably, Lowery made more from the synchronization fee for “Low” in the hit film The Wolverine, when the title character is hanging in a bar and the song comes on the jukebox. “Low” was also included in Perks of Being a Wallflower. “It has brought in a whole new group of younger fans,” he notes. In the future, Lowery says that limiting access to music might increase its profitability. “We’re seriously trying to do this experiment with the next Camper Van Beethoven record. It may be only analog for a certain period of time. And if there is a streaming service, we’ll put it on at a premium. We could make more money being exposed to less people. Apple does that. They have a small share of the computer market, and they make more than anybody else. They’re a more valuable company because they don’t try to sell something to everybody.” For anyone envisioning a career in the modern music business, Lowery offers this caveat. “They need to do a lot of different things, not just expect to be the performer; they need to know all aspects. The only people I know who are making money are those who write and own their own songs.” Contact Nick Loss-Eaton, nick.losseaton@gmail.com 30 September 2013