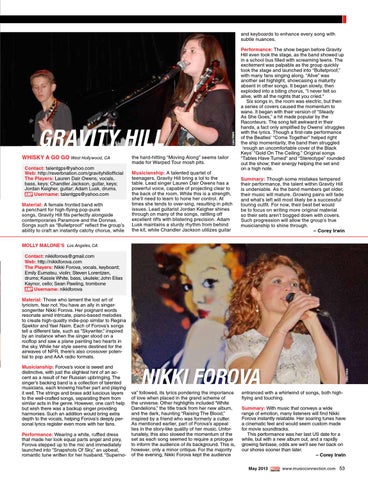 and keyboards to enhance every song with subtle nuances.

the hard-hitting “Moving Along” seems tailor made for Warped Tour mosh pits. Musicianship: A talented quartet of teenagers, Gravity Hill bring a lot to the table. Lead singer Lauren Dair Owens has a powerful voice, capable of projecting clear to the back of the room. While this is a strength, she’ll need to learn to hone her control. At times she tends to over-sing, resulting in pitch issues. Lead guitarist Jordan Keigher shines through on many of the songs, rattling off excellent riffs with blistering precision. Adam Lusk maintains a sturdy rhythm from behind the kit, while Chandler Jackson utilizes guitar

Performance: The show began before Gravity Hill even took the stage, as the band showed up in a school bus filled with screaming teens. The excitement was palpable as the group quickly took the stage and launched into “Bulletproof,” with many fans singing along. “Alive” was another set highlight, showcasing a maturity absent in other songs. It began slowly, then exploded into a biting chorus, "I never felt so alive, with all the nights that you cried." Six songs in, the room was electric, but then a series of covers caused the momentum to wane. It began with their version of “Steady As She Goes,” a hit made popular by the Raconteurs. The song felt awkward in their hands, a fact only amplified by Owens’ struggles with the lyrics. Though a first-rate performance of the Beatles’ “Come Together” helped right the ship momentarily, the band then struggled through an uncomfortable cover of the Black Keys’ “Gold On The Ceiling.” Original songs “Tables Have Turned” and “Stereotype” rounded out the show; their energy helping the set end on a high note. Summary: Though some mistakes tempered their performance, the talent within Gravity Hill is undeniable. As the band members get older, their music will mature. Growing pains will fade and what’s left will most likely be a successful touring outfit. For now, their best bet would be to focus on writing more original material so their sets aren’t bogged down with covers. Such progression will allow the group’s true musicianship to shine through. – Corey Irwin

Performance: Wearing a white, ruffled dress that made her look equal parts angel and pixy, Forova stepped up to the mic and immediately launched into “Snapshots Of Sky,” an upbeat, romantic tune written for her husband. “Superno-

NIKKI FOROVA va” followed, its lyrics pondering the importance of love when placed in the grand scheme of the universe. Other highlights included “White Dandelions,” the title track from her new album, and the dark, haunting “Raising The Blood,” inspired by a friend who was formerly a cutter. As mentioned earlier, part of Forova’s appeal lies in the story-like quality of her music. Unfortunately, this also slowed the momentum of the set as each song seemed to require a prologue to inform the audience of its background. This is, however, only a minor critique. For the majority of the evening, Nikki Forova kept the audience

Musicianship: Forova’s voice is sweet and distinctive, with just the slightest hint of an accent as a result of her Russian upbringing. The singer's backing band is a collection of talented musicians, each knowing his/her part and playing it well. The strings and brass add luscious layers to the well-crafted songs, separating them from similar acts in the genre. However, one can’t help but wish there was a backup singer providing harmonies. Such an addition would bring extra depth to the vocals, helping Forova’s deeply personal lyrics register even more with her fans.

entranced with a whirlwind of songs, both highflying and touching. Summary: With music that conveys a wide range of emotion, many listeners will find Nikki Forova instantly relatable. Her soaring tunes have a cinematic feel and would seem custom made for movie soundtracks. This performance was her last US date for a while, but with a new album out, and a rapidly growing fanbase, odds are we’ll see her back on our shores sooner than later. – Corey Irwin May 2013

Music Connection's May 2013 issue featuring Fall Out Boy, Back Up Singing Tips, A directory of Music Schools and Vocal Coaches, Beth Hart,...

Music Connection's May 2013 issue featuring Fall Out Boy, Back Up Singing Tips, A directory of Music Schools and Vocal Coaches, Beth Hart,...