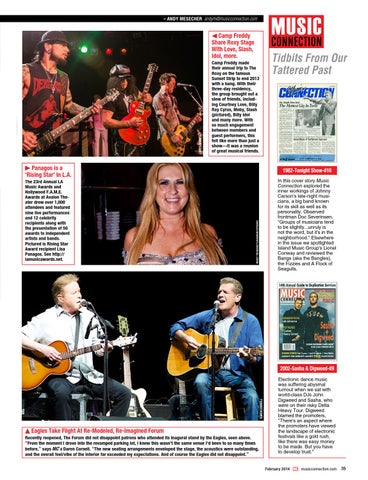 Camp Freddy made their annual trip to The Roxy on the famous Sunset Strip to end 2013 with a bang. With their three-day residency, the group brought out a slew of friends, including Courtney Love, Billy Ray Cyrus, Moby, Slash (pictured), Billy Idol and many more. With so much engagement between members and guest performers, this felt like more than just a show––it was a reunion of great musical friends.

Panagos is a ‘Rising Star’ In L.A.

In this cover story Music Connection explored the inner workings of Johnny Carson&#39;s late-night musicians, a big band known for its skill as well as its personality. Observed frontman Doc Severinsen, &quot;Groups of musicians tend to be slightly...unruly is not the word, but it&#39;s in the neighborhood.&quot; Elsewhere in the issue we spotlighted Island Music Group&#39;s Lionel Conway and reviewed the Bangs (aka the Bangles), the Fizzies and A Flock of Seagulls.

Eagles Take Flight At Re-Modeled, Re-Imagined Forum Recently reopened, The Forum did not disappoint patrons who attended its inagural stand by the Eagles, seen above. “From the moment I drove into the revamped parking lot, I knew this wasn’t the same venue I’d been to so many times before,” says MC’s Daren Cornell. “The new seating arrangements enveloped the stage, the acoustics were outstanding, and the overall feel/vibe of the interior far exceeded my expectations. And of course the Eagles did not disappoint.”

Electronic dance music was suffering abysmal turnout when we sat with world-class DJs John Digweed and Sasha, who were on their risky Delta Heavy Tour. Digweed blamed the promoters, &quot;There&#39;s an aspect where the promoters have viewed the landscape of electronic festivals like a gold rush, like there was easy money to be made. But you have to develop trust.&quot; February 2014

For our annual Grammy issue, we sat down with producer Jeff Bhasker (Bruno Mars, Kanye West, fun.) to discuss what it takes to write/produce a great song. Elsewhere in the issue is our annual directory of Producers/Engineers, DJ Tips, Signing Stories, Album Reviews and much more