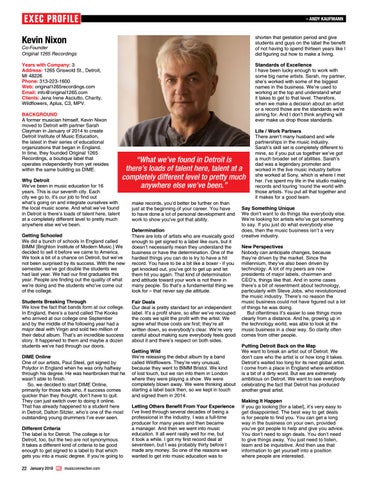 shorten that gestation period and give students and guys on the label the benefit of not having to spend thirteen years like I did figuring out how to make a living.

Standards of Excellence I have been lucky enough to work with some big name artists. Sarah, my partner, she’s worked with some of the biggest names in the business. We’re used to working at the top and understand what it takes to get to that level. Therefore, when we make a decision about an artist or a record those are the standards we’re aiming for. And I don’t think anything will ever make us drop those standards.

BACKGROUND A former musician himself, Kevin Nixon moved to Detroit with partner Sarah Clayman in January of 2014 to create Detroit Institute of Music Education, the latest in their series of educational organizations that began in England. In time, they founded Original 1265 Recordings, a boutique label that operates independently from yet resides within the same building as DIME. Why Detroit We’ve been in music education for 16 years. This is our seventh city. Each city we go to, it’s our job to find out what’s going on and integrate ourselves with the local music scene. And what we’ve found in Detroit is there’s loads of talent here, talent at a completely different level to pretty much anywhere else we’ve been.

“What we’ve found in Detroit is there’s loads of talent here, talent at a completely different level to pretty much anywhere else we’ve been.”

Getting Schooled We did a bunch of schools in England called BIMM [Brighton Institute of Modern Music.] We decided to sell it before we came to America. We took a bit of a chance on Detroit, but we’ve not been surprised by its success. With the new semester, we’ve got double the students we had last year. We had our first graduates this year. People are finding out the quality of what we’re doing and the students who’ve come out of the college. Students Breaking Through We love the fact that bands form at our college. In England, there’s a band called The Kooks who arrived at our college one September and by the middle of the following year had a major deal with Virgin and sold two million of their debut album. That’s an incredible success story. It happened to them and maybe a dozen students we’ve had through our doors. DIME Online One of our artists, Paul Steel, got signed by Polydor in England when he was only halfway through his degree. He was heartbroken that he wasn’t able to finish. So, we decided to start DIME Online, primarily for those kids who, if success comes quicker than they thought, don’t have to quit. They can just switch over to doing it online. That has already happened to a student here in Detroit, Dalton Sitzler, who’s one of the most outstanding young drummers I’ve ever seen. Different Criteria The label is for Detroit. The college is for Detroit, too, but the two are not synonymous. It takes a different kind of criteria to be good enough to get signed to a label to that which gets you into a music degree. If you’re going to 22 January 2018

make records, you’d better be further on than just at the beginning of your career. You have to have done a lot of personal development and work to show you’ve got that ability. Determination There are lots of artists who are musically good enough to get signed to a label like ours, but it doesn’t necessarily mean they understand the business or have the determination. One of the hardest things you can do is try to have a hit record. You have to be a bit like a boxer - if you get knocked out, you’ve got to get up and let them hit you again. That kind of determination and attitude toward your work is not there in many people. So that’s a fundamental thing we look for – that never say die attitude. Fair Deals Our deal is pretty standard for an independent label. It’s a profit share, so after we’ve recouped the costs we split the profit with the artist. We agree what those costs are first; they’re all written down, so everybody’s clear. We’re very careful about making sure everybody feels good about it and there’s respect on both sides. Getting Wild We’re releasing the debut album by a band called Wildflowers. They’re very unusual, because they went to BIMM Bristol. We kind of lost touch, but we ran into them in London where they were playing a show. We were completely blown away. We were thinking about starting a label back then, so we kept in touch and signed them in 2014. Letting Others Benefit From Your Experience I’ve lived through several decades of being a professional in the industry. I was a full-time producer for many years and then became a manager. And then we went into music education. It all went really well for me, but it took a while. I got my first record deal at seventeen, but I was probably thirty before I made any money. So one of the reasons we wanted to get into music education was to

Life / Work Partners There aren’t many husband and wife partnerships in the music industry. Sarah’s skill set is completely different to mine, so if you put us together we’ve got a much broader set of abilities. Sarah’s dad was a legendary promoter and worked in the live music industry before she worked at Sony, which is where I met her. I’ve spent my life in the studio making records and touring ‘round the world with those artists. You put all that together and it makes for a good team.

Say Something Unique We don’t want to do things like everybody else. We’re looking for artists who’ve got something to say. If you just do what everybody else does, then the music business isn’t a very creative industry. New Perspectives Nobody can anticipate changes, because they’re driven by the market. Since the millennium, they’ve also been driven by technology. A lot of my peers are now presidents of major labels, chairmen and CEO’s, things like that. And in some cases there’s a bit of resentment about technology, particularly with Steve Jobs, who revolutionized the music industry. There’s no reason the music business could not have figured out a lot of things he was doing. But oftentimes it’s easier to see things more clearly from a distance. And he, growing up in the technology world, was able to look at the music business in a clear way. So clarity often comes from other people. Putting Detroit Back on the Map We want to break an artist out of Detroit. We don’t care who the artist is or how long it takes. Detroit’s waited too long for its next global artist. I come from a place in England where ambition is a bit of a dirty word. But we are extremely ambitious on Detroit. We want to see everybody celebrating the fact that Detroit has produced another great artist. Making It Happen If you go looking [for a label], it’s very easy to get disappointed. The best way to get deals is for people to find you. You can get a long way in the business on your own, provided you’ve got people to help and give you advice. You don’t need to sign deals. You don’t need to give things away. You just need to listen, learn and be inquisitive. And then use that information to get yourself into a position where people are interested.