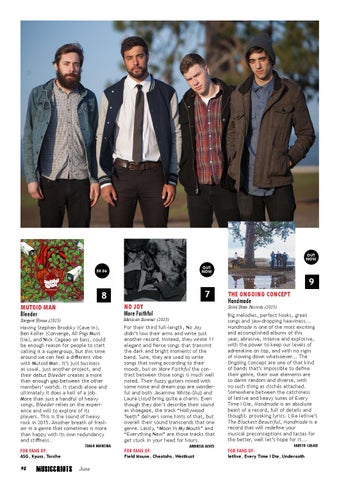 OUT NOW OUT NOW

Having Stephen Brodsky (Cave In), Ben Koller (Converge, All Pigs Must Die), and Nick Cageao on bass, could be enough reason for people to start calling it a supergroup, but this time around we can feel a different vibe with Mutoid Man. It’s just business as usual, just another project, and their debut Bleeder creates a more than enough gap between the other members’ worlds. It stands alone and ultimately it does a hell of a job. More than just a handful of heavy songs, Bleeder relies on the experience and will to explore of its players. This is the sound of heavy rock in 2015. Another breath of fresh air in a genre that sometimes is more than happy with its own redundancy and stiffness.

For their third full-length, No Joy didn’t low their arms and write just another record. Instead, they wrote 11 elegant and fierce songs that transmit the dark and bright moments of the band. Sure, they are used to write songs that swing according to their moods, but on More Faithful the contrast between those songs is much well noted. Their fuzzy guitars mixed with some noise and dream pop are wonderful and both Jasamine White-Gluz and Laura Lloyd bring quite a charm. Even though they don’t describe their sound as shoegaze, the track “Hollywood Teeth” delivers some hints of that, but overall their sound transcends that one genre. Lastly, “Moon In My Mouth” and “Everything New” are those tracks that get stuck in your head for hours.

THE ONGOING CONCEPT Handmade Big melodies, perfect hooks, great songs and jaw-dropping heaviness... Handmade is one of the most exciting and accomplished albums of this year, abrasive, intense and explosive, with the power to keep our levels of adrenaline on top, and with no signs of slowing down whatsoever... The Ongoing Concept are one of that kind of bands that’s impossible to define their genre, their own elements are so damn random and diverse, with no such thing as clichés attached. Somewhere between the catchiness of letlive and heavy tunes of Every Time I Die, Handmade is an absolute beast of a record, full of details and thought- provoking lyrics. Like letlive’s The Blackest Beautiful, Handmade is a record that will redefine your musical preconceptions and tastes for the better, well let’s hope for it...

letlive, Every Time I Die, Underoath 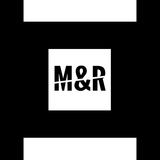